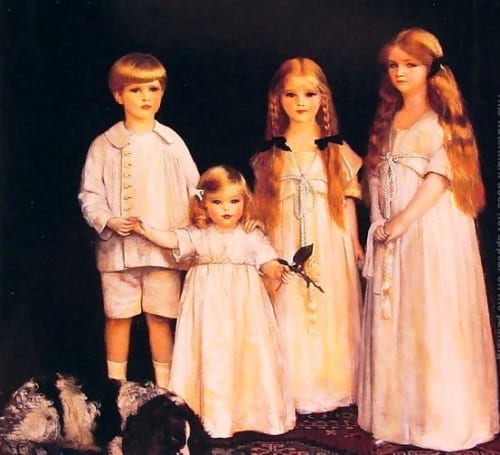 Do you ever find an unusual name, and have to drop what you’re doing to seek it out?

I was chasing down a completely different name when I stumbled on Synfye.  It appears to be the given name of one of British politician James Christie’s daughters.  She could have been born in the early twentieth century.  Synfye had siblings named James, Beatrice, and Fraunces.  That’s their portrait in this post, and that’s really all I can find on the family.

But I did find an 1875 edition of The Church of England and Lameth Magazine, including a lengthy essay on English Gipsies, by the Reverend S.B. James.  James spoke of the “gipsies” and their affection for the letter y, and this sentence: “A Gispy has an eye for a wild or fancy name.”  He wrote:

Deliah is evidently a maimed name, the one missing letter having been unskillfully removed by some experimentalist who thought it might look better without, while Camillia, and its surplusage of one letter and one syllable, shows that a letter or syllable more or less is of little account.

He then mentions Sanpriel and Synfye, disliking them as gender neutral names.

And then, in 1906, a book called The Romany rye, talking about given names.  The names listed are Jasper, Ambrose, Sylvester, Culvato “which signifies Claude,” Pakomovna, Ursula, Morella, Ercilla, Leviathan “was named after a ship, so don’t make a wonder out of her,” Camillia, Lydia, Synfye and Sanpriel.

The first writing is obviously a harsh and ugly judgment, evidence of discrimination.  But the second writing is devoid of that sentiment – if anything, it seems appreciative of the unusual names.  But there’s significant overlap between the magazine and the later writing in terms of names listed.

Could there have been some list of Romany given names in the late nineteenth century?

If it existed, how did the name get from that list to a child of a future Member of Parliament?

Names are baffling things, and endlessly fascinating, too.  If you know anything more about Synfye, please share it in the comments.