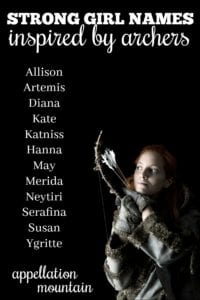 Strong girl names come in all sorts of categories. There are the classic names, like Eleanor. The quirky, offbeat ones, like Hermione.

And then there are strong girl names inspired by archers.

Women have hunted and fought with a bow and arrow since ancient days. We’ve armed our modern heroines with the weapons, too.

Archery served as a lady-like pastime in many eras. When they made the most recent movie version of Jane Austen’s Emma, the title character shot a few arrows herself. It had became a stylish pursuit in Georgian England.

Call most of the archers on this list battle-tested, rather than just sporting for fun.

If you’re looking for strong girl names, these twelve choices might be exactly right for you.

Allison peaked in the 1990s, but it remains a Top 100 pick today. Launched by television smash hit Peyton Place in the 1960s, this Alice name paved the way for Madison and many more. It makes this list thanks to Allison Argent of Teen Wolf fame. A skilled archer, Argent belongs to a family of werewolf hunters. That makes for a very Romeo-and-Juliet scenario when she falls in love with Scott McCall, who is – you guessed it! – the werewolf of the series. A hit for MTV, Teen Wolf debuted in 2011 and ran six seasons.

We love Athena and Aurora and Luna, too, but somehow we’ve neglected the powerful Artemis as a girls’ name. In Greek myth, she’s goddess of the hunt and the moon, twin sister to handsome sun god Apollo. She’s nearly always depicted as an archer. Hesiod described her as “delighting in arrows” and it’s often said that the Cyclops crafted her bow. It’s never been common as a given name, but it might get a boost from a different kind of warrior woman. Ready Player One, bestseller turned movie, includes a gamer who goes by the screen name Art3mis. Either way, it belongs with strong girl names inspired by archers.

Not so long ago, I would have simply written that Diana is the Roman equivalent of Artemis. And maybe I would have added that the goddess name is eclipsed by the memory of the late Princess Diana. But now Diana stands tall. Because not only is it the Roman goddess of the hunt, it’s also the given name of Wonder Woman. Wonder Woman sometimes wields a bow and arrow, and it’s the weapon of choice for many Amazons. (And the Amazons? Oh my, do they have great names!)

Marvel’s Avengers franchise has defined blockbuster in recent years. Post-End Game, we’re still waiting to see what happens next – including which new characters will emerge. But here’s one we know for sure. Expert marksman Clint “Hawkeye” Barton played a pivotal role in the early phases of the MCU. In the comics, he eventually hands the identity of Hawkeye off to a younger generation. In 2005, Kate Bishop took over from Hawkeye as part of the Young Avengers. That puts Kate among the strong girl names inspired by archers. And now, a Disney+ streaming series titled Hawkeye will give us Kate Bishop’s story, played by Hailee Steinfeld.

When we meet Katniss Everdeen in The Hunger Games, she’s using her bow and arrow to feed her family. Before long, she’s fighting for life. Another book or so in, she’s leading a revolution, still with her bow and arrow by her side. Katniss starts out as a gentle nature name, one that fits right in with the character’s backstory. But after a series of bestsellers-turned-blockbuster movies, we hear this name very differently today. It’s powerful, unexpected, but perhaps slightly too tied to the hero.

In 2011 movie Hanna, Saoirse Ronan plays a highly trained assassin – who happens to be a mere fifteen years old. She’s sent on a mission by her former CIA-operative dad, and manages to succeed. Among the weapons she handles with stunning expertise? A bow and arrow, of course. While a 2011 movie might feel too distant to inspire parents today, Amazon launched a series based on the character in 2019, and it is headed for a third season.

May names are having a moment, and Mae especially feels stylish. It’s a mini name, as compact as Zoe or Ava, with a bright and lively sound. May-with-a-y makes this list because of May Welland, the beautiful and accomplished New York Society miss engaged to marry Newland Archer in Edith Wharton’s Age of Innocence. In the novel and movie, we see her practicing with a bow and arrow. She’s shooting just for sport, probably the reason we don’t necessarily think of her in the same category as Katniss or Neytiri.

Remember when Disney princesses mostly lost slippers and took never-ending naps? Those days are over. Merida of DunBroch took the lead in the 2012 Disney Pixar movie Brave. The Scottish royal struggled with the traditional expectations of a princess, which led to mayhem, adventure, and, of course, a happy ending. Most sources list Merida as Spanish, but the name may also have separate, Gaelic roots, though they’re difficult to find.

Zoe Saldana wore blue – skin – to play Neytiri in Avatar. The Na’vi warrior fights with a bow and arrow, the traditional weapons of her people. The hit movie inspired an entire land at Walt Disney World’s Animal Kingdom. The name Neytiri is part of the Na’vi language, created just for the movie. (Learn to speak it here.) A handful of meanings are listed, but I’m not sure if any of them are correct. What is clear is that a few dozen girls have been named after the fictional character since the movie’s 2009 release. If those sequels ever come? There could be more kids with Na’vi names.

In the world of The Golden Compass, Serafina Pekkala reigned as Queen of the Lake Enara clan. The book was part of Philip Pullman’s His Dark Materials series. Serafina is a witch, and she’s also a warrior. Since her name makes this list, no surprise that she’s deadly with a bow and arrow, too. Serafina comes from a Latin name meaning fiery ones. It made headlines when Jennifer Garner and Ben Affleck chose it for their daughter back in 2009. The name continues to rise in use, but has yet to crack the US Top 1000.

If Susan hadn’t been such a smash hit back in the day, it would top the charts now. Alas, it was huge in the 1960s. And yet, it should be wearable today. There’s the tailored sound, fun nicknames like Susie and Zuzu, and, of course, the ties to The Chronicles of Narnia. Susan Pevensie is the reason the name makes this list. The older sister in the family of four, she receives a magical bow with arrows that never miss. But Susan practices diligently, and proves herself capable in a contest, or a fight.

With Khaleesi catching on as a girl’s name in the US, it’s reasonable to ask if other Game of Thrones names might, too. So far, Ygritte is not one of them. But the character has some serious appeal. Red-headed Ygritte was a Wilding, part of an independent people who live outside of the feudal structure. They call themselves Free Folk. She fights with a bow and arrow.

That’s it for my list of strong girl names inspired by archers. Have I missed any? Would you consider any of these names for a daughter? 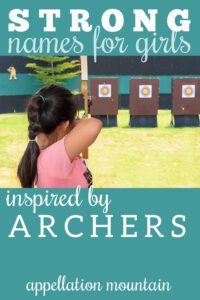 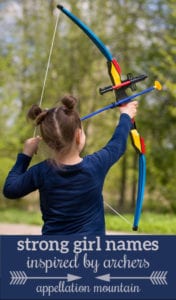