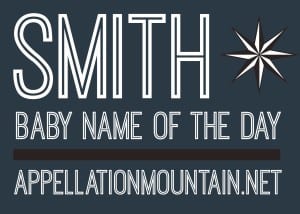 This is among the most common of the surnames, and yet relatively rare in the first spot.

Our Baby Name of the Day is Smith.

Once upon a time, a smith was a skilled metalworker.  The word might share roots with smite – to strike, from smitan, an Old English word meaning to hammer.  Medieval smiths fashioned swords and plowshares, and later, there were specialized goldsmiths and silversmiths and so on.

Over the years, it became a super common surname, so popular that Smith was almost anonymous, right up there with John Doe.  (Though – surprise! – parents seem reluctant to name their sons John Smith.)

But how about Smith?  Plenty of surnames make it to first spot.

If you were watching the final season of Sex and the City, you might immediately think of one character to wear the name.  Remember when Samantha Jones fell for a much younger man, a waiter hoping to jump start his acting career?  He was named Jerry Jerrod.  Samantha renamed him Smith Jerrod, and with helped him leave waiting tables in his past.  He, in turn, ends up being a thoroughly likable, decent guy – among the best of the boyfriends.

Smith is catching on with parents beyond those who watched the adventures of Carrie and company.

Why?  Some parents might be reviving a family surname.  Some are probably looking for an alternative to Mason and Jackson.

But this name also benefits from a tough guy edge, for two reasons:

In fact, Smith and Remington have a lot in common – though the fictional detective turned real sleuth played by Pierce Brosnan was far more famous.

There’s also 1908s indie band The Smiths, and, to make this more ambiguous, an actress named Smith Cho, who you might remember from the 2008 reboot of Knight Rider.

On a more obscure note, nineteenth century US President Martin van Buren and his wife, Hannah, had five sons: Abraham, John, Martin Jr., Winfield, and yes, Smith.   Abraham was named after Martin’s father and John after Hannah’s dad – but there’s no obvious namesake for Smith.

Then again, Smith was actually more common back in the day.  While Smith hasn’t cracked the US Top 1000 recently, he regularly charted in the nineteenth and early twentieth centuries.

Overall, Smith fits with other rising surname picks like Fox and Wilder.  He’s a little different, a little daring – and overall, a fresh possibility worthy of consideration.

What do you think of Smith?