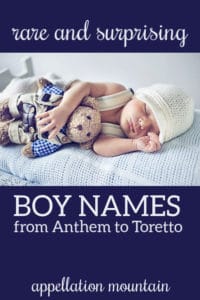 So many parents do! But just how rare? Some draw the line at anything ranked in the current Top 1000. But just over 200 boys receive names that sit right outside the rankings, at #1,014 or so.

Call that much less popular than Liam. But does it count as rare?

The US Social Security Administration reports on every name given to five or more boys or girls in a given year. (In other words, if four boys and four girls are named Pim, that’s not enough to make the list. But five boys? That qualifies.)

It’s possible to compile a list of names that don’t appear on the US Social Security list – Nameberry did a great one – and yet, that could be too rare, a name no one recognizes or knows exactly how to pronounce.

So how rare are these rare boy names?

These names were given to just eight boys between January 1st and December 31st of 2016.

Dozens of possibilities remain, from the familiar to the unknown, but still very wearable.

You might know Albion as a place name, but did you know it once referred to the island of Great Britain? First recorded some centuries BC, the origins and meaning remain obscure. Sound-wise, it falls somewhere between Julian and Orion and Albert.

True Blood gave us a werewolf called Alcide Herveaux. Alcide comes from Alcides, a Greek name once associated with the legendary hero Hercules. We’re wild for -s ending boy names – just think about Achilles, Atticus, and Atlas, so why not Alcides?

Word names keep coming. It leans patriotic, thanks to the phrase “national anthem.” Originally, the word referred to sacred music; later, it meant any song expressing joy. Only later did it refer to songs like “God Save the Queen” and “The Star Spangled Banner.” Musical, meaningful, and unexpected, Anthem still feels wearable.

Literary names like Atticus and Eloise appear on plenty of playgrounds. So do mythological picks like Orion and Juno. So why not Beowulf? The hero of an Old English poem, Beowulf defeats a terrifying monster. It may seem overly dramatic, but at least some parents have chosen it over the years. Celebrated set designer Beowulf Borrit might be the best known.

Kids answer to Lennon and Hendrix, so no surprise Bonham is spotted, too. It honors legendary Led Zeppelin drummer John Bonham. It comes from the Old French bonhomme, meaning good man.

Like Bay, Breeze works for boys and girls. Weather-related names like Rain and Misty have been heard over the years. Sound-wise, Breeze also brings to mind fiery Blaze.

The brink is the edge; in international relations, brinkmanship refers to going right up to the edge of conflict in order to achieve goals. This makes Brink feel bold; a risk-taking name that might have been too much in another generation. But this is the age of Maverick, so Brink might feel brisk and appealing.

Cal makes a cool nickname. Names like Calvin and Callum are rising, but Caldwell remains an under-the-radar option.

It sounds like Amber with a a C. But camber means to arch or curve, and appears in several disciplines, including aerodynamics. There’s also a legendary Welsh king by the name.

Musical names have had a good run, but many of them lean girl – Aria, Harmony, Cadence. Chord, however, feels more masculine. Glee alum Chord Overstreet is the son of a country musician.

Croy comes from the map, and is heard as a surname, too. Origins and meanings vary, but this name brings to mind croix – the French word for cross.

Dak Prescott plays for the Dallas Cowboys. While his full name is Rayne Dakota, his nickname Dak seems to have inspired parents who are football fans, in search of a Jack substitute, or both.

A surname name possibly coming the Gaelic word for oak tree, Darrow fits with all of those o-ending favorites. It also serves as a potential hero name, thanks to attorney Clarence Darrow, known for his wit and unwavering defense of civil liberties in landmark cases like the Scopes Monkey trial.

Diem brings to mind three things: D.M., for direct message. The Latin diem, for day, as in carpe diem. And maybe it sounds something like diadem, another word for a crown. It’s actually a Vietnamese name.

Legendary jazz guitarist Jean Reinhardt adopted the nickname Django for his Romani roots. It means “I awake.” This almost puts Django in the same category as Madonna or Cher – names for just a single celebrity. Except lately Django has other uses – characters in a Quentin Tarantino movie and the Disney-Pixar Ratatouille, as well as some other minor uses.

Harry Potter fans know that Fawkes is the name Albus Dumbledore’s pet phoenix, who plays a pivotal role in several stories. Fawkes almost certainly refers to Guy Fawkes, a leader of the failed Gunpowder Plot revolution in England in 1605. Guy Fawkes Day is celebrated with bonfires and fireworks ever since – a fitting name for a phoenix. Is a stretch for a child? Maybe. But with Fox in the US Top 1000, this sound-alike might work.

If Catcher makes the list, why not Fielder? It brings to mind baseball, but also the outdoors, as in the very popular Parker.

Most avian appellations trend feminine, but Finch feels just right for a son. Maybe that’s due to Atticus Finch, of To Kill a Mockingbird fame.

On a girl, Gale feels a little dated, despite the persistent popularity of Abigail. On a boy, Gale brings to mind the handsome and heroic Gale Hawthorne of The Hunger Games.

Godfrey is cousin to Jeffrey, via the medieval form Geoffrey. The two were often confused. The name means “peace of God,” which seems appealing.

Yet another surname name with potential, Hammond is a surname, place name, and the name of companies that manufacture, among other things, candy and electric organs. It’s not a stretch to imagine it on children, too.

A nicely Irish pick, Hannon could work for the same reasons as Hammond.

If Harrison is so popular, why not the similar-sounding Harrington? Interestingly, this one isn’t related to Harry and Henry, but shares the Har- sound. Also, Kit Harington makes it more familiar.

Originally, someone with the surname Holder lived near an elder tree – or near a symbol for one. It fits right in with Fielder and Catcher.

Hugo and Hugh continue to climb. So why not Hughes? For 80s film buffs, it brings to mind John Hughes, director of so many classics from the decade, from Sixteen Candles to The Breakfast Club.

Indio, California is home to legendary music festival Coachella. Robert Downey, Jr. chose the name for his son way back in 1993.

Like Indio, you’ll find Kiel on a map. It’s a Germany city on the Baltic Sea. It may mean wedge, a reference to the shape of the bay on which the city sits. Or it could be short for dozens of name. With Kai riding high, Kiel could fit right in.

A portmanteau of Leo and Giovanni, Leovanni feels promising. Maybe it’s because there are so many Leo names.

Celebrity surname names, like Winslet and Aniston, can work nicely. So why not Leto, as in Jared? It’s feminine in Greek myth, but has separate roots in the Latin laetus – happy.

Many of the Mac/Mc names – Mackenzie, McKenna – have been ceded to the girls. But Mackay feels like one with potential to remain Team Blue.

Speaking of Mc names with potential, MacGregor works. Sure, there’s Peter Rabbit’s garden nemesis. But it also feels like a refresh for Greg.

Mia tops the girls’ charts. Feminine in Japan, masculine in Sweden, and seldom heard in the US, Mio offers an intriguing and different sound, all in a spare three letters.

Like Nicholas, Nicanor comes from the Greek nike – victory. But it brings to mind the American writer Ernest Hemingway. He named his firstborn John Hadley Nicanor, the bonus middle inspired by a Spanish bullfighter Hemingway admired.

Harry Potter meets the master wand craftsman in the very first book. It’s a Wizarding World surname, but sounds an awful lot like an Oliver-Alexander smoosh.

The P, of course, stays silent in this word, referring to a sacred hymn.

This Spanish name comes from the word for shelter, a strong and appealing meaning.

One of the two legendary founders of Rome, twin to Remus, Romulus inspired the eternal city’s name.

Russell has never left the US Top 1000, but just Russ remains quite rare. It’s been barely holding on since the 1960s. And yet, it’s short, down-to-earth, and very wearable.

In 2018, 17 boys were named Serge, while another six became Sergei. The Roman family name endures in most European languages – think Sergio – but is seldom heard in English. Sergei is the Russian.

Speaking of imports, Severo is heard in Italian and Spanish, derived from the Roman family name Severus – stern. While the meaning might feel harsh, the sound appeals.

Arabic name Sa’id means happy; in Western Africa, the name evolved into Seydou. It appears as a first name and a surname.

Yet another -o ending boys’ name, Spiro comes from the Greek Spyridon, which might come from the Latin spiritus – spirit. For years, the name was associated with former Vice President Spiro Agnew, who served under Nixon – not an auspicious association. (Agnew was forced to resign – pre-Watergate – on charges of corruption.) Despite this baggage, Spiro’s cool sound might be worth considering as a new generation of parents thinks of the 1960s as the distant past.

I long assumed Tavis came from Tavish, the Scottish form of Thomas. But it’s actually related to Matthew, via surname Tewes.

Wait, what? Yes, boys are being named Thanos, as in the Marvel cinematic universe’s big, big baddie. While this name might succeed on sound, and could come from the Greek Athanasios – immortal – chances are that the few parents to use it were inspired by the super villain.

Toretto sounds thoroughly Italian, possibly a place name. It could make a cool, edgy alternative to popular picks like Matteo and traditionals like Antonio. But – get this! – Dominic Toretto is the character played by Vin Diesel in the long-running The Fast and the Furious franchise. A town in Sicily is named Torretta; it means turret, as in tower.

This is the age of Maverick and Legend, Messiah and King. Warrior combines a cool sound with an undeniably strong meaning. A bit brash, a bit modern virtue name, I can imagine Warrior striking some parents as the right kind of stands out-fits in choice. If Valor seems wearable, could Warrior be far behind? Another possible reference: NBA team Golden State Warriors, of California and Stephen Curry fame.

Wilford feels like a grandpa name. And yet, we’re always on the lookout for the next wave of revivals. Wilford also combines two fantastic sounds – Wil, as in long-time Top Ten favorite William, and emerging favorite Ford.

Can you imagine any of these rare boy names catching on?