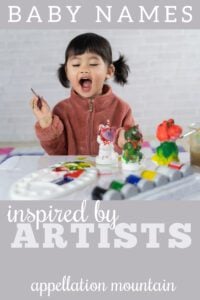 Artist baby names combine so many appealing qualities. Taking inspiration from a favorite artist adds meaning to a name choice. They feel original and creative, and their sounds? Undeniably on-trend.

Most of the artist baby names on this list come from painters. Layer in photographers, architects, and creatives from similar fields, and the list is nearly endless.

Not every surname works. When I wrote the original version of this post in 2015, I noted:

I’ve always been fascinated by Judy Chicago. But if I named my kiddo Chicago, you’d think of the Windy City or the sports teams, not The Dinner Party.

What a difference a Kardashian makes! Still, Chicago remains – overwhelmingly – a place name.

While these are all surnames, there’s no reason to overlook artist-inspired first names. Gems like Jasper, Leonardo, Ansel, Georgia, and Paloma abound in the art world. But many of those feel at least slightly more familiar, and perhaps not as instantly tied to the artists themselves.

These artist baby names bring to mind the creative powerhouse that inspired them, but still feel wearable for a child today.

Richard Avedon was one of the twentieth century’s most famous fashion photographers. He made his name at Vogue, but later in his career began to photograph Civil Rights workers and protestors opposed to the Vietnam War. He photographed Marilyn Monroe, as well as former president Eisenhower and poets Ezra Pound and Allen Ginsburg. It’s not a common surname, and its origins have proved elusive. But Avedon appeals for a few reasons. It fits with all of those Ava and Avery inspired rarities: Avonlea, Avalon, Aveline, Avila. But second, it seems like one of the few Av- names that really works for a son, an alternative to new favorites Sullivan and Donovan. Bonus? The nicknames Von or even Van work nicely.

Alexander Calder’s kinetic sculptures – also known as mobiles – make this a powerfully creative name. Calder studied engineering and designed toys when he was younger. After becoming established as an artist, he was commissioned to design everything from wraps for airplanes and a BMW to jewelry. Alexander’s grandfather, father, and mother were all noted artists, so this surname carries quite a bit of artistic surname name style. It’s originally a place name, found in Scotland and England. While many will find it artistic, it’s equally well-known as an ice hockey name, thanks to Frank Calder, the first president of the National Hockey League, for whom the Calder Cup and Calder Memorial Trophy are named.

Another obscure surname, the most famous bearer is well known: painter Mary Cassatt. American by birth, she moved to Paris in the 1860s and would eventually become part of the Impressionist movement. Her works are notable for depicting women, especially mothers and children. Cassatt has no history of use as a given name, but feels like a marriage of Cassandra and Juliet, or maybe a masculine form of any of the Cass- names.

Paul Cezanne is often credited with bridging the nineteenth and twentieth centuries in art. He studied with Impressionist Camille Pissarro, but his work evolved into something new. He’s especially known for his still lifes, and his focus on geometric form would inspire artists like Picasso. As a given name, Cezanne is slightly more common than some on this list. About three dozen girls have been given the name since the 1960s. And yet, Cezanne illustrates why artist baby names can work so well. It’s got that great ‘z’ sound, is familiar but exotic, and would likely be seen as a positive, creative choice.

Frida Kahlo is among the most famous female artists of the twentieth century, thanks in part to Salma Hayek’s much-lauded turn as the artist in 2002 biopic Frida. Kahlo’s father immigrated to Mexico from Germany, making the name an interesting mix of cultures, one with uncertain origins. With that bright ‘o’ ending, Kahlo feels like a more daring alternative to Arlo or Cleo. Since the artist is female, it seems like a possibility for a daughter. But so far, the very few Kahlos tend to be boys. Maybe that’s because it sounds quite a bit like boy names, from Kylo to Cal to Karl. It’s a powerful, vivid name, and one that works equally well for a son or a daughter.

Born in Belgium, Rene Magritte became one of the most famous surrealist painters of his age. As names go, it is immediately connected to the artist. And yet, Magritte sounds like a possible given name. It shortens to Maggie, and shares the -ett ending sound of Elliott and Scarlett, Beckett and Juliette.

Colorful Matisse probably traces its roots to Matthew, via Matthias, which became the surname name Mathis in French. While Avedon or even Calder might not be instantly recognizable, Matisse’s works are so well known that it immediately brings to mind the bright, vibrant images of the artist. Mat- names are close to Mad- names, and so very accessible, making Matisse a sound-cousin to names from antique Matilda to modern Maddox. Matisse is used in similar numbers for boys and girls across the last century, though it is quite rare. It’s creative, but accessible.

Philadelphia native Maxfield Parrish became one of the most successful painters and illustrators of the early twentieth century. And while we think of Maxfield as his first name, he was actually born Frederick. He later adopted the family surname, Maxfield, as his first. It fits in with all of the many Max names, but remains nicely distinctive.

Monet is probably the most popular on this list of artist baby names, peaking as a given name for girls in the 1990s – though it never quite cracked the US Top 1000. Claude Monet was one of the founders of Impressionism, and his artwork is widely known and easily recognized. The surname comes from personal names ending in the sound, like Edmond. Monet also feels like a girl’s name in the key of other French choices like Renee and Desiree. The phonetic respelling Monae saw some use, too, with singer-actor Janelle Monae raising its profile.

Artist Joan Miro was a Surrealist painter and sculptor. He was born in Barcelona, in the Catalonia region of northern Spain. The name’s roots are elusive. It might come from a given name. Mireia is a Catalan feminine given name, borrowed from an Occitan name invented by a nineteenth century poet, and best known to us as the more modern French Mireille, from the Latin mirar – to admire. This makes them cousins to Shakespeare’s Miranda. Lucy Lawless has a son named Judah Miro. It makes a bold and unexpected middle, but given our love of o-ending names, Miro works every bit as well as a first, for a daughter or a son.

We tend to hear Remington as a gun name. That – and the easy, unisex nickname Remy – likely explains much of the name’s appeal. Except Remington also brings to mind Frederic Remington, who captured the American West in both sculpture and painting. Turns out that Frederic was cousin to Eliphalet Remington, the gunmaker. And perhaps both help define the name’s appeal, too.

Another very popular entry on this list, Turner has had a good run in recent years – particularly for boys. It fits right with names like Carter and Hunter, an occupational surname. In this case, a turner worked with a lathe to fashion objects out of wood. (Or sometimes another medium.) But the truly artistic Turner was nineteenth century English landscape painter William Turner. And also nineteenth century English landscape painter JMW Turner – who also preferred to go by William. The latter is sometimes considered the first truly modern painter.

Nineteenth century landscape artist Winslow Homer remains one of the most influential American artists of his time. And while Winslow was his first name, it fits neatly on this list. It’s a little like Harlow and Marlowe, plus offers built-in nickname Winnie. That makes Winslow an option for a daughter or a son, one with just enough artistic sheen to feel creative.

Andrew Wyeth is among the best-known painters of the mid-twentieth century. His most famous work, Christina’s World, is even spoofed in The Simpsons. It once felt less than usable, thanks to pharmaceutical company Wyeth, the makers of household names like Advil and Robitussin. But the company has since been sold, and that helps make Wyeth feel more wearable. It also seems like a creative spin on Top 100 favorite Wyatt. And, hey – Theo, Thea, Lilith, and Ethan prove that the ‘th’ sound in names can be very attractive.

Would you consider any of these artist baby names as a first or a middle? What would you add to the list? 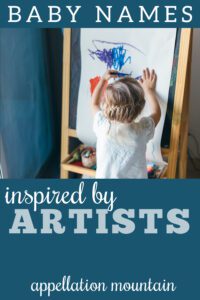 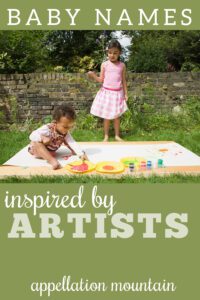