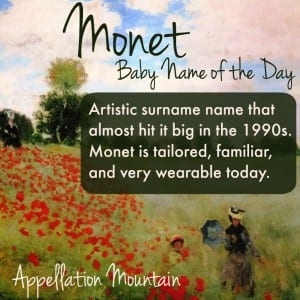 Has this stylish surname possibility missed its moment? Or could it be the next big thing?

Artist Surname Week begins with Monet as our Baby Name of the Day.

There are plenty of given names that end with -mon, and Monet could come from many of them: Edmond, Aymon, even Simon, though Edmond seems to be the most often cited.

There’s a similar surname spelled Monnet – which seems slightly more common as a surname, but virtually unknown as a given name. I’m guessing it’s related, but I can’t say for sure. As for Manet, I’m even less certain of the origins.

Speaking of being virtually unknown, Monet isn’t listed in the Meilleurs Prenoms database, which leads me to suspect that you won’t meet une petite fille named Monet in France today.

The et is pronounced more like the English ay – a long ‘a’ sound. Authentically French or not, that makes Monet feel at home with girls’ names like Renee and Desiree, both popular imports in the second half of the twentieth century. Born in 1840, Claude Monet is considered one of the original French Impressionists. His painting “Impression, Sunrise” gave the movement its name.

Nearly two centuries later, he remains a household name, and odds are good that you recognize his most famous works, most of which feature bridges and water lilies.

The tiny French village of Giverny was his adopted home, and tourists still flock there to tour his extensive gardens and the land that inspired so much of his work.

Monet: Other Than Claude

More on the numbers in a minute – but first, what prompted parents to consider Monet for a daughter’s name?

It must have been a mix of factors. We’ve long loved French names for girls, and vowel-ending names like Renee and Desiree had both reached the US Top 100 in recent years. Plus, with an increased interest in surname names for girls, Monet fit in with Taylor and Madison.

Let’s take a closer look at the numbers:

Why is that some names skyrocket while others fizzle? It’s hard to say. I’ve gone through a dozen possible theories in my head, but the simple fact is that Monet never made it big.

That could be a great opportunity today. If you’re after a tailored name with an artistic sensibility, familiar but seldom heard, Monet is a one to consider.

What do you think of Monet as a given name? Do you think this name is dated – or has yet to really take off?