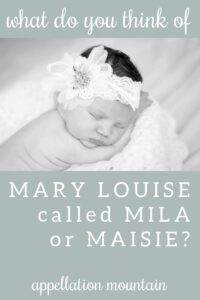 I’ve always loved names and became an avid follower of your page when we found out we are expecting our first child. I would love to hear your thoughts and recommendations for our baby girl.

Baby girl sounds like you-seff is due at the end of April and we are struggling to find a name we both love.

My husband prefers classic names that lean Biblical and were popular during our upbringing – Elizabeth, Samantha, Sarah, Julia, Katherine, Laura.

The names I enjoy are unusual and “too adventurous” for my husband’s taste, and to me, the names he likes feel plain/dated and maybe a little boring.

I’d like to be able to meet somewhere in the middle with a name that is familiar but not overly popular (not Top 10), and easily pronounced. Names that shorten to Ellie and Evie are also out due to heavy use among family and friends.

A few names we both like include Leah, Natalie, Zoe, Sophie, and Lucy – though I worry the “U” sound in Lucy may be too much with our last name.

Alternatively, we’ve also considered using names to honor family – first name Mary, for my husband’s grandmother, with middle name Louise, which is my mother’s middle name. My husband feels very strongly about using Mary, but to me, it’s just “fine” – if not a little stuffy and reads overly religious.

In order to compromise, I initially threw out the idea of using Mary Louise as a legal name, but calling our daughter Maisie or Mila.

My husband seems on board with this idea. He doesn’t “love” Maisie or Mila, but would go with it in order to solidify Mary.

I am second guessing this suggestion for several reasons:

If you were in our shoes, would you start fresh with a new name entirely or go with a family name? If Mary Louise is our answer, is one nickname better than the other, or is Mary itself the best choice and not as plain as I imagine it to be?

Another thought was to use Mary in the middle spot with one of the names we both like, but it’s tough to find something that flows well.

I very much appreciate any thoughts or opinions you and your readers are willing to offer.

Let’s begin in the middle: naming is always a compromise. It can be incredibly frustrating, too – particularly for those of us who love names and have given the question a lot of thought over the years.

But that doesn’t spell a lifetime of name regret.

Quite the opposite! We compromise on so many things in a relationship, and with some luck and hard work, we often find that decisions jointly made are far richer than those we make on our own.

Sometimes the more conservative namer exercises veto power, and just shuts down (nearly) every suggestion from the more adventurous partner.

Happily, that’s not the dynamic you have here. You’re both suggesting and working through possibilities. You’re on the right track!

Let’s talk about the big kahuna of a compromise first.

We tend to think of Mary as classic – which is true – and everywhere – which is weirdly … not.

You’re more likely to meet a Zoe, Natalie, or Quinn than a little Mary.

Names are tied to generations. I’m guessing you know – or can think of! – lots of successful, credible adult women with names like Lisa and Cindy, Jen and Michelle, Ashley and Heather. Step into a time machine and head back to, say, 1985, and those were little girl and teenager names.

Maisie and Mila are mainstream 2022 choices. That means that they’ll grow up with their generation. Sometime around 2065, it will seem perfectly reasonable to have a CEO or surgeon or president named Mila. (FWIW, there’s already Senator Mazie Hirono from Hawaii.)

Will the nickname cause problems?

Making a non-intuitive nickname stick can take some effort. That’s not a bad thing, exactly – just something to recognize and anticipate.

Mary-connected nicknames include Molly, Polly, Mitzi, Mimi, Mae, Maia, and Mamie – to name just a few. Maisie and MIla aren’t a stretch at all.

In my experience, it’s often a complete non-issue. Only transition times – starting a new school, for example, or signing up for new sport – require lots of “her name is Mary Louise, but we call her Lulu” reinforcement.

Well … yes. It might. They might wonder what you gave your daughter such a beautiful name only to never use it.

But … that’s a) completely beyond your control and b) something that could happen with any name.

If you’re wondering how to explain it? Don’t say that you loathe the name Mary. Instead explain that it’s meaningful, but it feels a little serious for your daughter. She’ll always have it as a name, but for daily use, you’ll call her the more casual Maisie.

For what it’s worth, at various historical points, Catholics considered Mary too meaningful to be used as a girl’s given name. It’s why there are dozens upon dozens of “Marian names” – names that refer to Mary, but don’t actually use the name.

In other words: you’re not alone! I know more than one Mary who has pretty much never been called Mary. Ever. (Including a world-changing woman who I met as Lulu.)

In other words: if Mary Louise called Maisie or Mila or anything else works for you and your husband? Go for it! It works so well! And it gives you both something to love – impeccable classics for him, current and cool nicknames for you.

If it isn’t obvious, I’m particularly drawn to Maisie. I’m guessing lots of people would have no problem imagining Maisie as a Mary nickname. As you probably know, it’s traditionally associated with Margaret, but that’s not top-of-mind for most people. It just sounds vintage, casual, and probably linked to something evergreen.

I also think it’s particularly great with your last name!

Let’s explore more names that might appeal to you both.

Would another classic-with-a-twist appeal? Anna is every bit as evergreen as Mary, but maybe a little more current. And Annalee (or Annika or Annalisa or any other Ann- name) feels like a potential compromise.

Midway between buttoned-up Elizabeth and sparky Luella, you’ll find Eliza. It’s got lots of energy, but a traditional vibe, too.

Lucy is a little close to you-seff. And Luella is a little unexpected. Would Lucia split the difference? It reminds me of ancient, storied Julia from his list, too.

A compromise between Mary and Maisie, a name so brief it’s modern.

When it comes to traditional names with Biblical roots and cool, unexpected sounds, Naomi is tough to beat. It share Natalie’s rhythm, Noa’s vowels.

No one could ever call Rose anything but classic. Rosalie adds some vintage zest to that traditional charmer.

Take Sophie, layer in ancient Sylvia, and you’ll arrive at Sylvie. It’s brief and complete, a stylish choice with a current sound.

I’m not sure any of these top Mary Louise called Maisie. Selah seems perfect, but maybe it will seem too different? I love Eliza, too, but I’m guessing maybe it’s already been considering and rejected.

That takes us back to Mary Louise called Maisie. Or, of course, one of the names you already mostly agree on. Leah feels like the obvious choice, but I can see it might be a little bit too traditional for you. Any chance Selah’s Old Testament status would take it from “out there” to possible?

What do you think? Mary Louise with a nickname? Which one? Or another name?