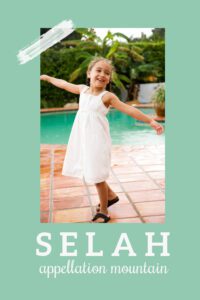 The baby name Selah combines the traditional simplicity of Sarah with a meaning as rich as Harmony or Promise.

It’s tempting to refer to the baby name Selah as an Old Testament name.

Except that’s only partially correct.

In the Old Testament Book of Psalms, the word selah appears. It indicates a pause. That makes this more akin to musical names like Cadence than traditional favorites like Naomi or Esther.

Pause can also mean rest, and that feels like a powerful meaning. It’s not exactly a virtue, but it suggests desirable qualities, like patience and calm.

Or at least that’s the way that we hear it today.

There’s also a Sela in the Old Testament, a city stretching from the Red Sea to the Dead Sea. Because Sela means rock, it was also sometimes referred to as Petra, the Latin translation.

A handful of women, and even a few men, were named Sela in the 1800s and 1900s. That’s also true for Selah, but in smaller numbers.

Henry James used Selah for the name of a character in his 1886 novel The Bostonians.

Kveller lists Sela as a unisex name meaning rock. Since parents routinely turned to the Bible for naming inspiration, it seems likely that the place name and the term from Psalms might’ve inspired a few families.

That starts to change late in the twentieth century.

That’s not exactly an unstoppable trend, but it’s clearly the beginning of something.

Credit probably goes to one woman.

Actor Sela Ward’s first roles were in the 1980s.

But it was 1991 when she got her big break, playing Teddy Reed on Sisters. The NBC drama ran through 1996, chronicling the Reed family. The show’s successful run included a Primetime Emmy Award for Ward. Fun fact: George Clooney appeared in later seasons as Teddy’s love interest, and eventual husband.

Ward continued to appear in television series, earning a second Primetime Emmy for her work on Once and Again, and also appearing on House, CSI: NY, and FBI.

Both Sela and Selah begin to rise in the early 1990s, just as Ward’s career flourished. After years of seeing her on our screens week after week, no surprise the name feels familiar.

It’s not just Ward, though.

In 1998, Lauryn Hill and Rohan Marley welcomed a daughter named Selah. Rohan is the son of reggae legend Bob Marley. That makes Selah music royalty. In 2011, she also launched a modeling career of her own.

Some parents might’ve stumbled on the name thanks to the high profile family.

For 2002’s Divine Secrets of the Ya-Ya Sisterhood, Hill contributed a soundtrack song called “Selah,” named after her daughter.

One way or another, it’s possible that Selah Marley probably helped contribute to the name’s rise.

Selah sometimes substitutes for Amen, a sort of spiritual affirmation. It flits on the edges of pop culture, from the letters of Hunter S. Thompson to reggae songs.

It’s possible the meaning was always there. It also seems like we might’ve expanded and added to Selah across the years.

Either way, the baby name Selah feels like a purpose name. It’s not a virtue exactly, like old school Grace. It’s more akin to modern choices like Creed. It signals belief in something higher, but it’s slightly ambiguous, too.

Even without the meaning attached, the baby name Selah might have succeeded on sound.

This is the age of Lyla and Mia, Isla and Sophie. Liquid, flowing sounds, heavy on vowels and short on consonants, define many of the most popular choices for our children today. Short and nickname-proof helps, too.

Plus, long-time favorite Sarah makes Selah feel like an Old Testament name – just one that we’ve overlooked in the past.

That’s no longer true, of course.

And yet, Selah’s rise has been slow and steady. Nothing makes this name feel trendy or fleeting. In fact, it still feels nicely uncommon.

If a mix of meaning and sound matter to you, the baby name Selah might be the unexpected choice you’re after.

What do you think of the baby name Selah? 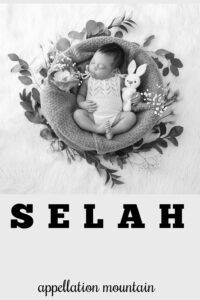