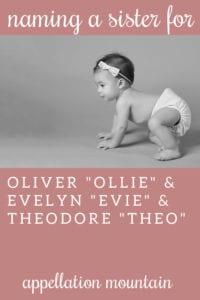 We are expecting our fourth child and are running into a wall with naming the baby girl on the way!

With our older three, we have created a naming pattern that we would like to follow but are having a hard time selecting a first name that checks all the boxes.

We prefer a more traditional name that we can shorten when they are children. It should be a classic name that most everyone is familiar with, but not names that there will be multiple of in their classes.

We use family names for the middle spot, and will probably go with Elizabeth, Charlotte, or Anne this time.

Names that we have considered and thrown out are Edith and Genevieve (nicknames too similar to Evie). We have seriously thought about Cecilia, Eleanor, and Juliana but don’t know if any of those is The One.

Our last name is versatile, starts with C and is only two syllables, but we wouldn’t want more than for our formal first name.

Nearly everything in parenting gets easier with experience. Somehow naming isn’t one of those things!

Plus avoiding names that are too close to our older children – that’s a challenge, isn’t it?

So while Cecilia, Eleanor, and Juliana could all be great choices, I’m going to start fresh and see if we can brainstorm some names that might be off your radar.

Americans have named our daughters Addison and Adeline in steady numbers – and so many spellings! But regal, saintly Adelaide has remained just beyond the mainstream. Addie serves as the default nickname, but you could also use Della.

Just like Addie and Della, Annabelle shortens to Annie and Bella. But I also suggest it because it just plain sounds like a sister for Evelyn – feminine, but slightly more tailored.

On the downside, Emilia isn’t quite undiscovered. Especially when the sound-alike Amelia is factored in, it’s quite popular. But Emilia comes with some great built-in nicknames. Millie would top my list, though maybe it’s a little similar to Ollie? Mia and Emme are great choices, too, or maybe even Mimi or Lia.

Yes, Gwendolyn and Evelyn both end with -lyn. And yet, I don’t think they’re too close at all. Instead, they’re both feminine, but not frilly; traditional, but not Elizabeth/Mary level classic. Nothing sounds quite like Gwen. Ollie, Evie, Theo, and Gwen are perfection together.

Pronounce it loo-shah, loo-see-uh, or loo-chee-uh, it’s the more elaborate form of Lucy. It can, of course, be reduced to Lucy/Lucie, or Lou, Lulu, Lula, or any of the many affectionate and sweet Lou names.

I think of Miriam as traditional and familiar, but it’s also quite unusual. Nicknames include Miri and Mimi, and – especially if you’re fan of The Marvelous Mrs. Maisel – Midge.

Rose names abound, and many of them straddle that instantly-familiar/not-too-common line. Rosalie is one of the best!

Theresa fails to rank in the current US Top 1000, but Teresa does. And nicknames Tess, Tessa, and Tessie could be exactly what you’re looking for.

Overall, I keep coming back to Gwendolyn – unless repeating the -lyn ending gives you pause? In that case, I wonder if you’d consider Miriam? Oliver, Evelyn, Theodore, and Miriam are quite stunning together, and the nickname options for Miriam are rich and varied, too.

Readers, over to you – what name AND nickname would you suggest to go with Oliver, Evelyn, and Theodore – Ollie, Evie, and Theo?