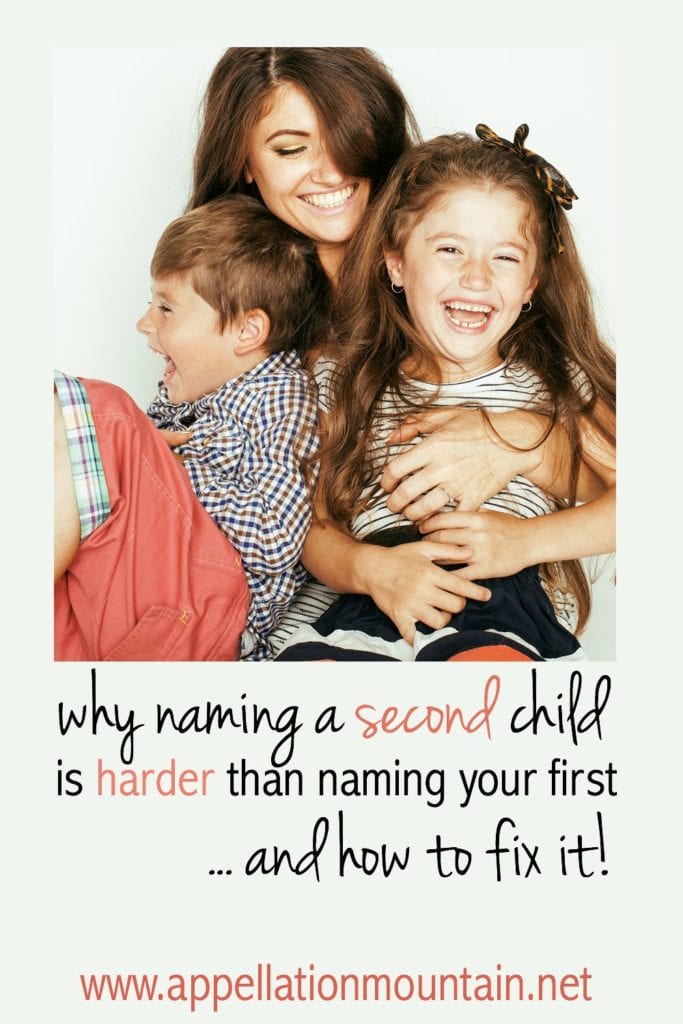 Naming a second child can be harder than naming your firstborn.

Which doesn’t really make sense, does it? After all, experience is usually a good thing, and parents are often more relaxed and confident with their second – or third or fourth – child.

So what is it that makes naming a second child more challenging?

It depends on your circumstances, but here are the reasons – the stories, really – that come up most often.

So often we have one perfect name. Or maybe two – one for a boy and one for a girl. We’ve imagined using those names for years and years, since we were old enough to imagine having children. Or at least since we first met our partner.

Like sea glass, we wear these names into an appealing smoothness. The Name starts to feel natural, inevitable. So when our first child is born, the name isn’t just a name. It becomes a birthright of sorts, a promise we made to ourselves about the kind of family we’d have someday.

It’s a tough act to follow, and your timeline for baby number two’s name? That’s almost always shorter than the first time around.

The Fix: Recognize that your timeline is shorter, and that some of the process of falling in love with your second child’s name can happen after the baby is here and named.

Maybe you always knew that you wanted to name a daughter after your beloved grandmother. Or your husband is Charles Evans Smith III, and you loved the idea of having a Charles IV, complete with a distinctive nickname you chose just for your kiddo.

This is just like the first problem, but with added complexity. Do you need to find another family name for your second child? And if it’s not a family name at all, then what makes it The Name? Will your younger kiddo feel slighted if his name is one that you just happen to like?

The Fix: Start by looking for family names. The best approach is often to consider names from the other side of the family, though there are no rules! Take a creative approach to honor names, and recognize that a great middle might be more than enough to satisfy. Or maybe you really are done with honor names after your firstborn, and it’s time to start fresh.

Naming a Second Child: Can Arabella’s sister be Sloane?

Sometimes this problem is a consequence of using The Name, or more often The Family Name. But not always! Plenty of parents have a shortlist that spans styles, from the frilly and feminissa to the tailored and unisex, the super-traditional and buttoned down to the wild and Western.

If you choose a name that, for whatever reason, is at one style extreme of your list, it can be tough to realize that you’ve ruled out other possibilities. There’s no reason that Arabella and Sloane can’t be sisters … but I tend to think that parity in naming is a good thing for siblings. Unless there’s a reason for the names to reflect such vastly different styles, it’s usually better to find something in the middle. Arabella and Isla work better together, even though they’re still very different.

The Fix: Don’t rule out the names that don’t immediately feel like a fit, but focus on finding a name that shares some qualities with your older child’s name. That can be syllable count, origin, or any other quality that creates a link between the two names. You don’t have to match – but it’s better to avoid names that clash.

Naming a Second Child: Will this lock us into a pattern?

The opposite problem presents just as many challenges. Maybe you named your sons Jackson and Julian, and now wonder if your daughter has to have a J name, too.

And yet, it’s possible that you’re the only one picking up on certain things. True, Beatrix, Eleanor, and Frances are all seven-letter names for girls with a classic feel that happen to be in alphabetical order. But betcha that the parents are the only ones who notice the letter count and the alphabetical order parts. There’s no need to start a name search for baby #4 with the letter G.

The Fix: Unless you’re planning to start a family band, chances are that more subtle patterns will never be noticed outside of your family. Feel free to let those kinds of quiet requirements go if they don’t lead you to a name you love.

I’d also argue that the minute you fear being locked into a pattern is probably the right minute to make a change. If you’ve always loved the idea of naming a daughter Jasmine, then there’s really no problem finding a name for Jackson and Julian’s sister. But if no J name feels right? Don’t use a J name!

Naming a Second Child: Everyone else is using all of the names!

Something happens when you become parents. Even if you didn’t know a lot of young children before you welcomed your firstborn, you almost certainly do now. You also hear more names – in your older child’s nursery school or playgroup, at swim lessons or church. Henry seemed like a reasonably uncommon name when you chose it – but now he’s one of three in your extended circle of friends! Even worse? One has a brother named Max, and the other has a sister called Sadie – both names on your original shortlist.

The Fix: The bad news? Many of your favorite names might feel off limits in this situation. The good news? If you know your style, it’s easy to search for substitutes based on those names. Max might be gone, but Jude and Kai could still be options. And there are dozens of names similar to Sadie, but not yet taken.

Naming a Second Child: Your first child’s name rules out other favorites.

Most of us would probably agree that sisters should not be named Daisy and Maisie. Madeline and Matilda or Leo and Theo would be downright confusing.

How do you know if two names are too close? I have a quick checklist here, but there’s plenty of gray area. And everyone draws the line in a different place. Some parents won’t repeat a first initial; others like the shared sounds of Emmett and Emily.

The Fix: If you’ve checked the list and concluded that your names are too close, the fix is the same as above. Start with the names you like, and build from there. Madeline’s sister can’t be Matilda, but could be Adelaide or Josephine.

Naming a Second Child: You want to improve on your first child’s name.

Sometimes our first child’s name is too perfect. And sometimes we realized that we didn’t get it exactly right when naming our firstborn. Maybe you like the name just fine, but dislike its popularity. Or the spelling and pronunciation are more problematic than you expected. Maybe there’s a nickname that stuck, one that you never imagined you’d choose.

As with everything in parenting, there are plenty of ways that our children surprise us. If your firstborn’s name hasn’t worked out as you’d hoped, there’s reason to be apprehensive about naming a second.

The Fix: It’s okay to admit that you wish your first child’s name was different in some ways – longer or shorter, nickname-proof or nickname-able. Whatever the qualities that you’re missing with your firstborn’s name, keep those in mind when naming future children. You can learn from the experience, and find a great sibling name that meets a few more of your criteria.

Now it’s your turn: in what ways was naming a second child harder than the first?