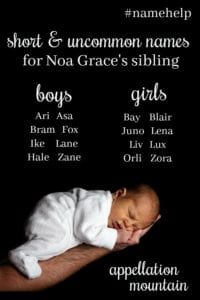 I am pregnant with my second little one and have come back to your site to peruse names. I was a frequent visitor during my first pregnancy. We decided to name our daughter Noa Grace. I love her name (and surprisingly, have met several girl Noas – unintentionally) but this time around I’m not feeling the same attraction to any names.

I’m sure this will change once we get closer to meeting the new baby.

I was hoping for some #namehelp for a brother or sister to a Noa Grace. We have a hyphenated last name so I’m not looking for anything too complicated. I’m not concerned with nicknames, either.

Mostly looking for a simple, strong name that is off the beaten path but doesn’t scream “my mom made this up”.

I love Noa, and it really does hit all of your requirements, doesn’t it? Brief but complete, plenty of history but still uncommon.

The challenge isn’t necessarily fitting that exact description – lots of names do! Instead, it’s about finding something that strikes the right note, just like Noa.

It’s tempting to stick with names that are very unusual and rather brief. But it’s also possible that making too narrow of a list would overlook some great possibilities, so I’ll include some that are a little longer – or more mainstream – just for comparison’s sake.

A Sister for Noa Grace

Bay – A short name with a strong sound, Bay can be unisex, just like Noa. Pop culture gives this one to the girls, thanks to a character on an ABC Family series named Bay Madeline. With nature names like River so in favor, why not Bay? Read more about Bay here.

Blair – Spare and tailored, Blair is fairly common for a girl – it’s just outside of the current Top 500. Like Noa, it is a straightforward choice with a modern vibe, but certainly doesn’t feel invented. Read more about Blair here.

Juno –  A few years ago, I was sure Juno would be the next big thing. We love mythological names; there was the Ellen Page movie; and a handful of celebs named their daughters Juno, too. But it never quite took off – even though Juniper and June have! Does that make Juno the perfect fits-in/stands-out sister name for Noa? Read more about Juno here.

Lena – Lena is one of those names that seems familiar – but do you really know anyone named Lena? Okay, maybe one. Or two, max. But it’s a traditional name that’s nicely underused. It’s ranked in the high 200s for the last few years, and hits all of the marks: simple, strong, not invented. Though maybe it’s too safe? Read more about Lena here.

Liv – Noa immediately makes me think of other mini names, and Liv seems like one of the best. It packs a lot of sound into just three letters, and a great meaning, too: life. It might be a short form of Olivia or another name with the sound, but Liv also has roots as an independent name – and thanks to Liv Tyler, that’s generally known.

Lux – Lux is simply the Latin word for light; it works for a boy or a girl in our age of Luke and Lucy, but it’s seldom heard. Read more about Lux here.

Orli – Maybe it’s because Noa has Hebrew roots, but I keep thinking about Orli. It has that same unexpected feeling without being invented. It also means light, but spell it Orly, and it’s a major airport just outside of Paris.

Zora – Zora had a good run in the late nineteenth and early twentieth centuries; author Zora Neale Hurston was born in 1891. Today it’s rare, but feels familiar, literary, and not invented at all. Read more about Zora here.

A Brother for Noa Grace

Ari – Ari immediately comes to mind. Like Noa, it’s a short name with Hebrew roots, though it can also be Scandinavian. Depending on your language it means lion (Hebrew) or eagle (Scandi).

Asa – Are Noa and Asa too close, or exactly right together? I can’t decide, but Asa ticks a lot of the boxes – uncommon but not invented, and a brief, but complete, name. Read more about Asa here.

Bram – I’m astonished that Bram still isn’t heard more in the US. It’s big in the Netherlands, and should be familiar in the US, thanks to author Bram Stoker. The name comes from Abraham, too, which, between the Old Testament and the US President, is plenty familiar. But maybe others’ oversight is the perfect opportunity for a brother name for Noa. Read more about Bram here.

Fox – Fox is on the rise, entering the US Top 1000 last year and making plenty of parents’ shortlists. But it’s still far from common. Read more about Fox here.

Ike – Friendly and strong, Ike reminds me of Jack, but is so much less popular. It’s sometimes short for Isaac, and it was President Dwight D. Eisenhower’s nickname, too. But I think Ike can stand on its own.

Lane – Lane belongs with surname names for boys like Mason and Landon. It leans a little bit Western, a name at home in wide open spaces. It’s in the Top 300, so maybe that’s just too common for you to consider. And yet, I think it fulfills the other requirements nicely.

Hale – If word names appeal to you at all, Hale might work. It’s an archaic term meaning healthy. Fun fact: Noa means active, which seems like an appropriate meaning to match up with Hale.

Zane – I’ve already suggested Lane, so maybe Zane feels like more of the same. But I think there’s something to the Z sound that makes this short, simple name distinctive and memorable.

Overall, I’m drawn to Juno and Orli for girls, and Bram, Hale, and Fox for boys. But I really think all of these names have potential – and I could probably add another dozen to each list without much trouble.

That might not help. After all, your baby only needs one name!

So let’s throw it over to the community, because I know they’ll have some great ideas.

What would you name a brother for Noa Grace?