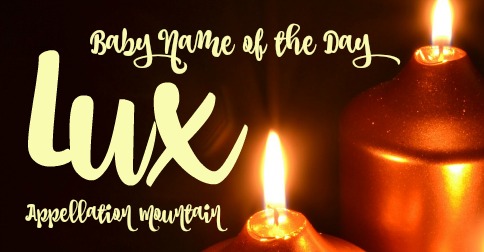 Our Baby Name of the Day is Lux.

In Latin, lucere means “to shine” and lux is the word for light.

Light has plenty of meanings today. It’s a source of illumination, but also a source of joy. Light can imply heat, as from a fire. Or hope, as with a candle. 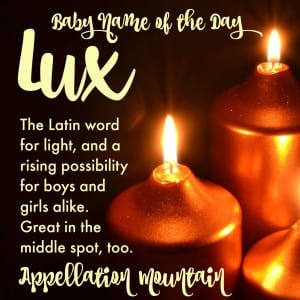 No surprise that plenty of names with connections to light are popular, like Top 100 picks Lucy and Luke.

Add an ‘e’ and it’s luxury. The word originally implied decadence and sin, from the Latin luxuria – excess.

Over time, luxe lost its taint, though it still implies indulgence. 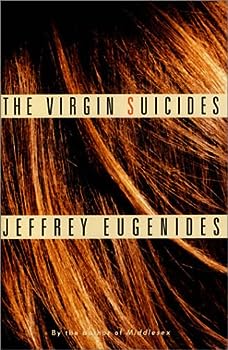 The novel was set in the 1970s. Eugenides told the story of five sisters, each of whom takes her life, none for reasons that are ever revealed. It’s narrated by a group of anonymous teenage boys who are obsessed with the tragic sisters, including the gorgeous Lux. When the novel became a movie in 1999, Kirsten Dunst played the character.

Eugenides’ choice of Lux seems unusual, especially when compared to her sisters: Cecilia, Bonnie, Mary, and Therese. The novel explicitly describes the family as Catholic. Is this a Marian name?

In Spanish, Nuestra Señora de la Luz is a title for Mary, and I’ve come across women named Luz, Maria Luz, and Maria de la Luz. US Census records include women who spell the same names with an ‘x’ instead of the ‘z’, so it seems like they were two spellings of a single name.

In English, of course, the ‘z’ version rhymes with goose, while the ‘x’ rhymes with tux – two very different sounds, but a shared origin.

In other cases, this might be a family surname.

It’s found on the map in France – though it doesn’t appear to be regularly used as a given name there today. It’s a surname in Germany and the Netherlands. As a surname, it could come from the given name Lucas, or possibly from the German Luchs – a nickname for someone with good eyesight, from the word for lynx.

Suicidal teenage girls might be bleak inspiration, but it seems like the 1999 movie gave the name a boost. It first charts in US Social Security records in 2001. Eight girls and five boys were given the name.

There’s also The CW’s short-lived television series Life Unexpected, the story of teenaged Lux Cassidy who grows up in foster care until she tracks down her biological parents, and in one of those only-on-television twists, they end up living together as a family.

Or maybe this one just sounds like a name today. Boys’ names ending in x are quite stylish, and choices like Dax and Jax are rising quickly. And we like those high-value Scrabble letters for girls just as much.

As of 2014, 124 girls and 27 boys were given the name. It also makes a great middle, though it’s impossible to track in the second spot.

Overall, it seems like the kind of spare, meaningful choice that appeals to parents today and could wear well on a child born in 2016.

Do you like Lux better for a boy or a girl, as a first or a middle name?