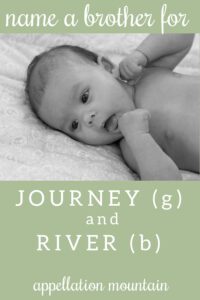 We have two children and we’re expecting a third (and last) child in a few weeks, a son.

Our daughter, Journey Suzanne, is 5 and our son, River Lewis, is 3. We didn’t mean to choose two noun names, but they were the names we both liked. The middle names are for his mom and my dad.

Our list of girl names is long: Sloane, Meadow, Poppy, Serena, Lyric. My favorite for a daughter is Lyric. I know it could be a boy’s name but I’ve always thought of it as a girl’s name.

I’m not sure where to start with another boy name. Sage and Callen are the only names that I sort of like, and my husband dislikes them both.

Part of me thinks that another word name makes sense, but it shouldn’t be too close to the other kids’ names. So I’m not sure where that leaves us.

My husband’s only suggestion is Maverick, but I just think it’s too much.

We’d like to use some form of Matthew or Matthias for his middle name.

It’s an interesting dilemma, isn’t it? I’m tempted to start suggesting word names, and yet … you didn’t really set out to choose word names, right? And you’ve both ruled out some obvious choices, like Maverick, Sage, and Lyric.

River and Journey strike me as word names with a contemplative vibe. They’re sort of outdoorsy, maybe a little bit virtue-adjacent. And while they don’t feel completely new, they’re definitely twenty-first century names. You wouldn’t name a brother for Journey and River something classic like Michael, but I can see that a name as bold as Maverick isn’t quite a fit, either.

Let’s see if we can come up with some names that fit that same kind of vibe, without being too obviously matched.

A BROTHER for JOURNEY and RIVER

Strictly speaking, Beau is a word – in another language. It means handsome in French. And in English, it’s an outdated word for boyfriend. (Or maybe “suitor” is a better synonym – but that seems outdated, too!) Anyway, Beau has plenty of modern energy, even if it’s not completely novel as a given name.

We tend to think of Boone as a surname name, and it is. But it comes from the French bon – good, ultimately from the same Latin root as our word bonus.

Knox comes from a Scottish word meaning hill, but we associate it with Fort Knox – home to the US gold repository.

While this surname name has distinct origins, it looks an awful lot like the Latin pax – peace. That makes it feel like a brother for Journey and River.

The first straight-up word name on this list, Ridge might be too well-matched to River. And yet, I think it works.

A hopeful nature name, Wells mixes surname style with the natural world and water associations of River and the positive, almost virtue-vibe style of Journey.

It’s that last name that checks all the boxes for me – Journey, River, and Wells. I particularly like Wells Matthew. It’s a good mix of the current and the traditional. And I think Wells bridges the style of both sibling names, while still feeling like a current, stylish choice.

Readers, what would you name a brother for Journey and River?