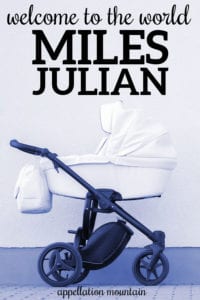 UPDATE: Welcome Miles Julian! Karlie writes “This was just the list we needed to get us thinking – thank you! We considered Jude, Garrett, Blake, Theo, and Davis. We finally agreed to either Holden or Julian, and we were going to decide after we met him. But then, in the hospital, my husband agreed that it really was my choice and our new little guy looked like a Miles. We flipped a coin for his middle name, and he’s Miles Julian. Thanks to everyone again!

We named our son Joseph FamilyName LastName III, and call him Joey. I’m not into family names, and always said I’d never have a junior. Then I married one!

Part of the agreement was that Joey would be the only family name we’d use, and I’d have veto power over future children’s names. We’re expecting a son, and my husband is trying to stick to that. But he already said he can’t imagine calling his son Miles, which is my favorite name. I also like Beau, except Joe, Joey, and Beau?! Yeah … no!

He has suggested Ryder, Archer, and Jace. I don’t hate them, but they’re not names I would choose.

Can you help me find some names that my husband won’t hate, and I’ll (hopefully) love?

Congratulations on your new baby boy!

Here’s the thing: you were really accommodating with your firstborn’s name.

Some parents fall into using family names; others reluctantly agree even though it’s not their preference. But you were against it, and went with the tradition only because it meant so much to your husband to hand down his name.

That’s pretty generous of you.

Normally, I believe (strongly) that couples have to compromise on a name choice, and the ultimate decision is better for that process.

If he tells you that Miles was the kid who bullied him mercilessly in third grade, then sure. I’d take that name off the list. But there’s really no need for you to consider Archer or Ryder or Jace, right? Because this choice is very much up to you.

Still, I wouldn’t be surprised if there’s a name that appeals to your love of Miles and Beau, but also speaks to your husband’s preferences. Oh, and sounds great with Joey!

Okay, I talked tough about not considering your husband’s preferences. But Asher falls midway between Miles and Archer. It carries a great meaning: happy.

A cool Irish name that’s rising in use in the US, Declan might be the next Ryan. But so far, it remains just a little different.

There’s something carefree and cool about Beau. I think Finn shares the same vibe.

If you don’t mind two J names, Julian might be exactly right. It comes close to Joseph’s classic vibe, but is very much a contemporary favorite.

A modern-sounding Old Testament name, Levi works well as a brother for Joseph – or for more current favorites like Miles.

A surname-style name that connects to the enduring character Tom Sawyer.

Every bit as classic as Joseph, but brightened by on-trend nickname option Theo.

If you love Miles, there are dozens of -s ending boy names that might substitute. Wells is one of the best.

Readers, over to you – what would you name a brother for Joseph if Miles and Beau are out?