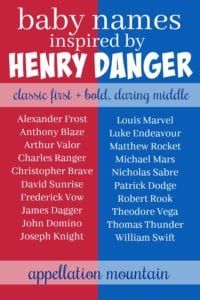 What are Henry Danger baby names?

First up: Henry Danger is a Nickelodeon comedy about a teenage boy named Henry Hart in the fictional town of Swellview. He goes looking for a part-time job and finds himself employed as Kid Danger, a sidekick to local superhero Captain Man. Henry + Danger = Henry Danger, the name of the show.

Jace Norman played the hero-in-training for five seasons and still cameos in the spin-off, Danger Force.

Because Kid Danger is a secret identity, you won’t hear the character called Henry Danger.

But the show title sounds like a given name, first + middle. After all, plenty of parents have used the middle name Danger for their children, so that years from now they can quip “Danger is my middle name.” That’s an old-school construction, by the way. A little bit of searching suggests that it dates to 1909, at least, when a character in this book insisted “porpoise is my middle name.”

The more you hear “Henry Danger,” the more it starts to sound like a winning combination.

So that got me thinking … what are some other Henry Danger baby names?

Alexander Frost – If I’d thought about it before my Alex was born on a snowy December night, this might have been his name.

Arthur Valor – Emile Hirsch named his son Valor, but I think I like it better as a middle.

Charles Ranger – Ranger doesn’t seem too crazy to me, but I think it fits.

David Sunrise – Sunrise isn’t quite in same category as Dagger or Rocket, but it’s undeniably bold.

Frederick Vow – True is the obvious bold middle, but Vow is even less expected … and so even edgier.

James Dagger – Too much? James is such a classic that I think it can support nearly any middle, even one this intense.

John Domino – On the rare occasion we hear Domino, it’s almost always for girls. But I love the sound paired with everyguy name John.

Joseph Knight – From the Middle Ages to Jedis, this middle feels bold and virtuous, too.

Louis Marvel – Fall Out Boy’s Pete Wentz just named his daughter Marvel; the newest member of the British royal family is Prince Louis. Why not put the two together?

Michael Mars – Bruno Mars’ stage name comes from the god of war, but the singer has softened the name’s edge just slightly – and added an extra sheen of cool.

Nicholas Sabre – Does the ‘s’ of Nicholas blend with the ‘s’ of Sabre too much? Or is it exactly right?

Patrick Dodge – Fun fact about Dodge: it comes from Roger. But today it feels like a mix of truck name and Dickens’ Artful Dodger, with a dose of legendary sports team thrown in, too.

Robert Rook – I’m a sucker for alliteration, and bird names? Love those, too. Rook refers to a type of crow, a chess piece, and also to swindle – the last inspired by the bird. But I think it’s still a great choice, at least in the middle spot.

Theodore Vega – Vega is the name of a star, borrowed from the Arabic word meaning eagle. It’s bold and dramatic, and while it’s not as obvious as Thunder or Rocket, I think it fits with Henry Danger baby names.

Thomas Thunder – Now that Chris Hemsworth’s version of Thor is a household name, maybe Thor feels less dramatic. But Thunder, as in the god of? That still seems appropriately big.

William Swift – Swift refers to a bird, but also to speed. I love the subtle way the W of William is repeated in the sound of Swift.

These are all names I brainstormed as possible daring middles, but couldn’t quite match up with a classic first.