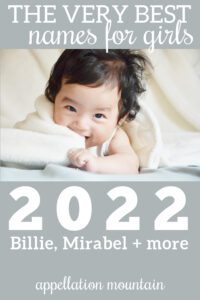 Presenting my picks for girl names 2022!

When it comes to predicting the next big thing, my record is mixed. I’ve nailed a few – others are misses.

But the fun is in the trying, right?

These dozen names are my choices for the best girl names 2022. They’re the names that will fit perfectly in the coming year. And while some will increase in use, none of these are on track to replace Olivia at the very top of the popularity charts. (At least not yet!)

Some years style and sound drives these lists. In other years, pop culture features in a big way. This year combines a little bit of both.

After all, that’s really what powers names to the top of the charts – a mix of appealing sound and an opportunity for plenty of parents to hear the name anew – and think it could be just right for their daughter.

We’re naming our daughters Charlie and Frankie and Stevie. (With a nod to Nicks and Budd for that last one.) So how can it be that Billie, a time-honored borrowed-from-the-boys choice, remains outside of the current Top 1000? After all, Billie Eilish continues to record hit after hit. And, in fact, Billie sits just beyond the current rankings, suggesting that 2022 could – finally! – be Billie’s year.

Yes, endless reboots of Scooby Doo mean that nearly everyone across generations thinks of Daphne as the red-head in the purple dress. But then came Bridgerton. The Netflix hit made a steamy series of romance novels into must-stream TV at the close of 2020. And Daphne, eldest Bridgerton daughter, re-cast the mythological name. Now it feels like a successor to Chloe, Zoe, and Penelope.

The best nature names aren’t just nouns. They convey something more, like elegant Rose or adventurous River. Dove immediately suggests peace – a name both calm and powerful. Disney Channel star Dove Cameron put this name on parents’ radar just as we were embracing Wren. But now it’s the 2022 Disney+ series Willow featuring a character named Dove. Could it be enough to push this straightforward nature name into greater use?

Speaking of Willow, it’s easy to dismiss this name as an invention for the original 1988 cult classic. But there’s far more backstory to this name than you might guess. Elora will not appear in the 2022 Disney+ series, but it’s reasonable to expect that it could spark more interest in the original tale. Plus, Netflix’s Reservoir Dogs has also given us as character who answers to Elora. And, of course, the name is already trending, another El- name like so many current favorites.

Faye feels gently old-fashioned, but also other-worldly. It’s a good pick for parents who love Wheel of Time, but wouldn’t name a child Moiraine. When a name can appeal to the same families who love Khaleesi and Grace, that’s a potential hit. Plus, Faye peaked in the 1930s. If the hundred-year rule applies, that’s an entire generation of names that we can expect to hear again right about now.

Since returning to the US Top 1000 in 2017, Florence has climbed in use quickly. But 2022 could be a big year for this vintage favorite. After all, Florence Pugh has become a superhero at the center of the Marvel Universe. First she played Natasha’s sidekick in Black Widow; now she’s headed to Hawkeye on Disney+. While it’s too soon to say what’s next for the actor, it’s worth noting that Scarlett Johansson pushed her name right into the US Top 25.

Goldie checks every box. It’s a color name, like Scarlett and Navy. It feels like a vintage revival, an alternative to Millie and Sadie. There’s just a hint of virtue name about Goldie, too, thanks to all of the positive qualities we associate with the precious metal. Speaking of precious, that puts Goldie in the same category as gemstone names like Ruby and Pearl. Factor in Goldie Hawn’s status as a Hollywood icon from an earlier age, and it’s easy to imagine parents embracing this sparky, colorful name.

This name could’ve been huge already. After all, we love Lucy and Luna, and so many -elle/-ella enders. But Luella has stayed off most parents’ radar, an unexpected vintage choice that hasn’t quite caught on. Now, though, Disney has reinvented their one-dimensional villain Cruella de Vil as a punk rock antihero. Birth name: Luella. Emma Stone’s performance could be just enough to shortlist Luella for even more families.

Much has been made about how no one names their daughters Mary anymore. Except we still name them Maria. The name sits just outside the current Top 100. It fits in nicely with chart-topping favorites like Olivia and Amelia. With the West Side Story remake on the big screen, we might all be singing the unforgettable song – and considering it for our daughters.

Girl names ending with -elle and -ella are nothing new. Gabrielle peaked in the 1990s; Isabella dominated the early part of the twenty-first century. Some parents might want to bypass any -elle/-ella ender. But more of us might be looking for something just slightly different – a fits-in sound with an unexpected twist. Disney’s Encanto delivers with a hero named Mirabel. And while the movie spells it -bel, American parents tend to like the extra letters. Juliette outranks Juliet; Zoey is more popular than Zoe. That’s why it’s Mirabelle that makes this list of girl names 2022.

We love nature names, and Oak has an appealing strength. Surname names are favorites, too, with names like Everly and Paisley galloping up the charts. Oakley combines the best of both trends, plus it nods to Annie Oakley, the legendary sharpshooter immortalized in the musical Annie Get Your Gun. It’s not just Oakley, though – Oaklyn and Oaklynn are rising, too.

The ultimate big sister, Wendy Darling has changed over the years. She’s always kind and brave, but new tellings of the story make her more adventurous – an equal to Peter. Disney’s live action remake, Peter Pan & Wendy, gives equal billing to Miss Darling. With a 2022 debut slated on Disney+, it could be just enough to put this name on parents’ shortlists. While Wendy’s return might feel premature – the name peaked in the 1960s – it first debuted in the US Top 1000 in the 1930s. So maybe – just maybe – Wendy is due for an earlier-than-expected revival.

Those are my picks for the best girl names 2022. I could go on! But I’ll stop here, because I’m curious to know: what names do you think will take off in the next twelve months? 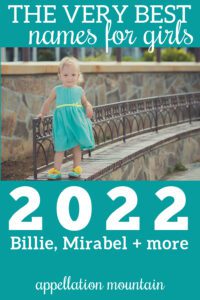