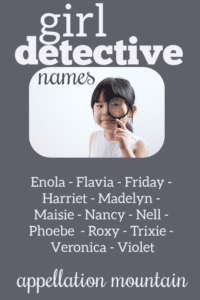 Girl detective names range from the traditional to the downright novel. But every one of them feels capable and smart.

These dozen names come from fictional girl detectives over the last century or more. Some have appeared in movies, but most of them come from books. (Of course, quite a few have leapt from the page to the screen.)

Many are school girls, but a handful are young women, either when their story begins, or maybe as we’ve grown up with them.

It makes for a mix of intriguing names.

Years after Sir Arthur Conan Doyle gave us the brilliant Sherlock, writer Nancy Springer gave us his much younger sister, Enola. She’s following in her big brother’s footsteps, solving crime in Victorian England. It’s a curious name, the anagram of alone, invented by a writer in the late nineteenth century. Despite that mournful meaning, it’s been used over the years. And now, Millie Bobby Brown is bringing the part of Miss Holmes to life in a big screen adaptation of Springer’s stories. In other words? We might meet a few more Enolas.

Speaking of teenage crime solvers in England, Flavia de Luce stories are set in the 1950s. She’s a well-born young woman, brilliant beyond her eleven years. But her family has fallen on hard times, and Flavia is left on her own quite often. She uses all of this free time – and her considerable talents with chemistry – to solve all sorts of murders and ghastly crimes in her part of the countryside. Author Alan Bradley has penned eleven novels starring the pre-teen sleuth. While Flavia remains rare, it seems an obvious possibility in our age of Fiona and Olivia, Ava and Faith.

Tuesday Weld, Wednesday Addams, Thursday Next, and Friday Barnes. Thursday counts as a detective, of course, in the world created by Jasper Fforde. But she’s 30-something when the series begins. Friday Barnes, on the other hand, is just eleven when she solves her first crime. The story is set at her boarding school. The series is up to eight books now. While the most famous literary Friday is Robinson Crusoe’s right-hand man, there’s no reason most calendar names need to be reserved for boys or girls.

Harriet the Spy was published in 1964, became a movie in 1996, and has been well-read by thousands of children along the way. (A Disney Channel reboot followed in 2010, too, but several key details are changed.) You wouldn’t call the main character a detective. She’s an aspiring journalist, known for knowing her classmates’ and neighbors’ secrets. But if Harriet M. Welsch doesn’t belong on this list of gutsy, independent girls who figure out what others are trying to hide, well … who does? The name remains outside of the US Top 1000, even though it fits perfectly with popular picks like Abigail and Evelyn.

Some of the girl detectives should be called young women. Miss Madelyn Mack solved her first crimes in 1914, thanks to the imagination of Hugh Cosgro Weir. I’m not sure how well they’d hold up for modern readers, but it’s worth noting that this character is among the very earliest girl detectives fiction gives us. She works closely with her journalist friend Nora Noraker in 1910s New York City. Based on the little I’ve read, Nora functions as Madelyn’s Holmes, chronicling their adventures. It’s fun to see a twenty-first century favorite applied to a modern character living a whole century earlier.

Another detective in her 20s, Maisie Dobbs served as a nurse during the Great War before setting up shop in London. She calls herself a psychologist and investigator, but mostly, she solves crimes. Jacqueline Winspear introduced the character in 2003, and carried her right into the thick of World War Two by the time the fifteenth novel was published in 2019. The character is quiet and capable, a steady and thoughtful figure, a little different than some on this list – but with every bit as much bravery.  Along the way, Maisie transformed from a quirky, dated name to a fast-rising favorite in the key of Top 100 pick Sadie.

No list of girl detective names could be complete without Nancy, as in Drew. Carolyn Keene is listed as the author, but the Nancy Drew Mystery Stories, just like the Hardy Boys series, were all written by a group of writers hired by Edward Stratemeyer. Nancy solved The Secret of the Old Clock back in 1930. Depending on how you count them, there are up to 175 titles, published pretty much continuously from 1930 until 2003. That’s not counting crossover novels with the Hardy Boys, or the latest take on the character, Nancy Drew Diaries, first published in 2013.

We recognize her name instantly. The stories have inspired movies over the decades, including 2007 and 2019, plus television series in the 70s and 90s. Now the CW is about to release yet another television series starring the girl sleuth. Two more names that could get a boost from the series? Bess and George, Nancy’s crime-solving BFFs.

Edward Wheeler created dozens of characters in the late nineteenth century, many of them women. That made Wheeler one of the few dime novel authors to write memorable female heroes alongside his more conventional male protagonists. There was Deadwood Dick; Photograph Phil, the Boy Sleuth; and New York Nell, the Boy-Girl Detective. She’s a girl who dresses as a boy to sell papers and solve crimes. An 1854 publication date makes her one of the earliest in the genre.

We remember L. Frank Baum for The Wizard of Oz, and Kansas farm girl Dorothy. But he penned lots of stories, some nearly forgotten today. One of those is 1911’s The Daring Twins: A Story for Young Folk. Twins Philip and Phoebe are orphans. Phoebe’s sleuthing saves Phil after he’s falsely accused of a crime. A sequel followed in 1912, and more books were planned. But Baum never completed them.

Another dime novel heroine, Roxy sold flowers on the street in turn-of-the-twentieth-century New York. She was created as a young protege of Nick Carter, one of the most famous fictional detectives of the era. In fact, the titles of her stories begin with “Nick Carter’s Girl Detective.” Carter was much better known, and for far longer – he inspired a radio show and a movie series. But Roxy has her place on the list of girl detective names.

Beatrix “Trixie” Belden debuted in 1948, inspired by Nancy Drew but with a few notable differences. She’s younger, and while she solves an impressive number of difficult cases with her Bob-Whites club, she tends to stick closer to her home on Crabapple Farm in New York’s Hudson Valley. Author Julie Campbell Tatham penned the first six books; other authors added more, totaling 39 published novels through the 1980s.

Veronica Mars debuted in 2004, starring Kristen Bell as a high school student in fictional Neptune, California. Veronica’s life falls apart when her best friend, Lilly Kane, is murdered. Mars eventually solves the crime – along with plenty others along the way. The series ran for just three seasons, but it’s remained a fan favorite with a devoted following. A Kickstarter-funded movie was made in 2014; and now, in 2019, a fourth season is premiering on Hulu. Could it be enough to make Veronica’s everybody’s new favorite? It could be the coolest of the girl detective names right now.

In 1915, author Anna Katharine Green wrote The Golden Slipper and Other Problems for Violet Strange. I’d never heard of either, but get this: Green’s work predates Arthur Conan Doyle by a detective. Credited as the “mother of the detective novel,” Green polished the idea of a detective series. Green would write more than 40 books over her career. Violet Strange is typically considered the very first girl detective, a debutante who secretly solves crimes on the side. A radio adaptation aired on the BBC in 2013, but Violet mostly lives on in the creations she inspired – like Nancy Drew, and the rest of the girl detectives.

What are your favorite girl detective names? Are there characters you would add to this list?