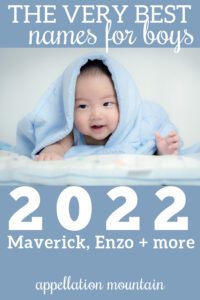 These twelve choices represent my favorites for the coming year. Several of them are already trending, but could climb even higher in the next twelve months. Others remain just a little under the radar.

These list freely mix sound, style, and pop culture. Any list of names does! While a handful of these really are succeeding on their own merits, many owe at least a little something to current events and pop culture, making them rise a little higher than similar names.

When it comes to successful predictions, my record is mixed. But that never stops me from trying to imagine what’s next for boy names 2022!

Banks fits with big, splashy names like Kingsley and Reign. But it also feels like a cousin to River –  after all, it started out as a surname for someone who lived by a river bank, or maybe a hillside. Combined with a stylish sound, that makes Banks one of the boy names 2022 to watch.

Ezra meets Theo, with a dash of Luca, too – is it any wonder Enzo already ranks in the US Top 200? It’s short for Italian masculine names ending with the sound, especially Lorenzo – Laurence, in English. In fact, Lorenzo is slightly more popular than just Enzo – at least for now.

Equally rugged and aspirational, Everest has been on the fringes for most of the twentieth century. After all, Tenzing Norgay and Edmund Hillary first climbed the world’s tallest mountain back in 1953. The first British expedition to make the attempt – and garner world-wide attention – was even earlier, in 1921. Everest is outdoorsy and bold, a name that suggests courage and some serious endurance and skills. It also sounds just a little different than current Top 100 favorite Everett.

Maybe Giannis is a little bit of a long shot. But Milwaukee Bucks star Giannis Antetokounmpo is having one heck of a year. Born in Greece to Nigerian parents, his path to the NBA presented hurdle after hurdle. Now he’s a two-time league MVP and Defensive Player of the Year. Pronouce Giannis like Yannis. It’s the Greek form of John, an unconventional choice that looks surprisingly familiar.

Normally, listing a Top 100 boys’ name – much less a Top 50 one! – would feel like cheating. But let’s talk about Maverick, because it’s gone from wait-you-named-your-baby-what to a mainstream favorite in two short decades. Why? We are living in the age of epic boy names. The original Tom Cruise movie helped put Maverick on parents’ long lists. Now the long-delayed sequel is expected in May, making Maverick potentially one of the hottest boy names 2022.

For every Blaze, there are nearly three dozen boys named Sebastian. So, yes, we’re embracing bold and daring names. But there’s still very much a place for little gentlemen, boys at-home in bow ties. Montgomery could be a next-generation gents’ name, calling back to Hollywood icon Montgomery Clift.

The Matrix came out back in 1999, introducing us to Neo – The One, played by Keanu Reeves. Back then, the only boy name ending with O in the US Top 1000 was Alejandro. Neo sounded, well, new. And very science fiction-y. Since 1999? Theodore, Leo, and Leonardo all make the Top 100, with Milo, Enzo, Arlo, Emiliano, and Thiago not far behind. Neo would fit right in, sound-wise. Besides, Neo is a compelling character. It’s easy to imagine parents naming their children after the hero.

First up: Otto was the most viewed post at Appellation Mountain this year. And AM readers? They tend to be ahead of the curve. But it fits, doesn’t it? Like Neo, it’s a next wave o-ender. But unlike Neo, Otto belongs with vintage comeback choices. After all, Henry and Theodore were once hopelessly out-of-favor.

Speaking of neglected classics, Raphael has long been overlooked across the English-speaking world. But it’s traditional and romantic. Like Nathaniel’s Nate, Raphael’s Rafe immediately makes the name accessible and all-boy. And there are just enough references – from the Renaissance artist to the Ninja Turtle named in his honor – to ensure that we all recognize the name. It’s worth noting that Rafael – the Spanish version – is far more popular, at #247.

This mid-century favorite isn’t quite ready for revival on paper. And yet, from the French word for king to Scottish hero Rob Roy, this name feels strong and proud – if a little retro. The runaway success of Ted Lasso, and the appeal of Roy Kent might just change that. Sound-wise, it’s equally tempting to put Ray on this list. Both are contenders for the next Max/Gus/Cal name.

This name has always been preppy with an edge. It sounds at-home in the Ivy Leagues, like Yale graduate and 41st president of the United States, George HW Bush. But there’s also Walker, Texas Ranger. And now, Walker Hayes. The Fancy Like singer’s moniker is pitch perfect for boy names 2022.

Like Banks at the top of this list, Wells appeals for so many reasons. It’s a little bit of a nature name. But it suggests wellness and well-being, too, taking it closer to modern virtues. And the idea of a wellspring or a wishing well reinforces the name’s hopeful vibe. It’s a perfect pick for the coming year.

Those are my choices for the best boy names 2022. Which names do you think we’ll hear more of in the coming year?

Note: Popularity data was updated on May 16, 2022 – and nearly every name rose in use, often by quite a bit!