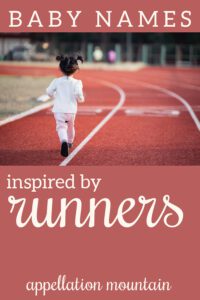 Looking for baby names for runners?

If you’re always training for your next half-marathon, then names inspired by your lifestyle could be the perfect choice. This mom ran throughout her pregnancy, then named her son Miles.

She’s not alone, either. Dozens of runners complete significant races well into their second and third trimesters.

If that’s you, then maybe you’d love to name your child something to celebrate all those accomplishments. Expectant parents often draw inspiration from the things they love, whether that’s music or destinations or sports.

Famous runners could be a source of inspiration. But many names of legendary runners, like Abebe Bikila, seem very specific. Others, like Michael Johnson, are so common that they don’t feel quite as tied to the sport.

These baby names for runners range from the bold to the mainstream, but they all tie in to a love of the sport.

A long and lovely girl name, Atalanta comes to us from Greek myth. She refused to marry until her father found a suitor who could beat her in a footrace. Atalanta outran many a young man, until finally Hippomenes persuaded the goddess Aphrodite to help. Tragedy followed – hey, this is Greek myth! – but the initial, and much better-known, story has plenty of appeal. It’s the best mythological name choice, especially since Nike, the Greek goddess of victory, is a little too running shoe.

A word name, fast and fiery Blaze owes something to the traditional – and unrelated – Blaise.

Place names remain popular. Boston all fits the two-syllable, ends-in-n pattern so popular for boys’ names in recent years. If you’re a runner, Boston rises to the top for another reason. The Boston Marathon debuted in 1897, making it the world’s oldest annual marathon.

We tend to think of Cadence as musical. Runners know that cadence – the number of steps taken per minute – is an important part of getting faster, too.

Originally, Chase referred to the hunt. By the fourteenth century, it meant pursuit, too. The idea of chasing a goal almost makes this name a modern virtue pick. It fits right in with baby names for runners.

Sports fans might not think of Florence as a runner name, but FloJo? Legendary. Florence Griffith Joyner is considered the fastest woman athlete of all time.  In the 1980s, she won five Olympics medals, three of them gold. She still holds several world records.

The 1994 smash hit movie Forrest Gump covered everything from Elvis Presley to Vietnam to Watergate and more. The character is known from early days as a surprisingly fast runner. At one point, a heartbroken Forrest takes up running and inspires a movement. There are Forrest Gump running clubs and races named in his honor, too.

When it comes to great runners, Jesse Owens comes immediately to mind. Not only did he win four gold medals at the Berlin Olympics – with Hitler watching – USA Track and Field’s highest honor is known as the Jesse Owens Award. Usain Bolt might be better known today, but Jesse Owens’ legacy is unsurpassed.

The first woman to finish the Boston marathon was Kathrine Switzer. She wasn’t exactly welcome, though – Switzer registered for the 1967 race using her initials, and was assaulted by a race official during her run. Despite the adversity, Kathrine finished, and her name appears in the history books.

The numbers give Lane to the boys, but figures like Rory’s BFF on The Gilmore Girls keep it wearable for both. Why does it belong with baby names for runners? If you’ve ever run on track, you’ve stayed in your lane. It’s subtle, but that might be a positive.

If Boston belongs, why not London? The London Marathon in its current form dates to 1981, but races through the city took place nearly a century earlier. What it lacks in history, it makes up for in profile. It’s part of the World Marathon Majors, along with Chicago, New York City, Tokyo, Boston, Berlin, as well as the World Championships and the Olympics.

Can you imagine a better name for a runner’s son than Miles? The meaning has nothing to do with distance. Instead, Miles comes from either a Slavic word meaning gracious, or possibly the Latin word soldier. Still, we associate Miles with distance, making it a great choice for a runner.

While the modern Olympics includes dozens of sports, the heart of the original competition was always track and field. Record-setting runner Usain Bolt named his daughter Olympia Lightning.

Pace can come from the Latin word for peace. When we’re thinking about baby names for runners, it means to run at a steady rate. It’s rare as a given name, but fits with favorites like Chase.

Runners and Catholics recognize this one immediately: Sebastian. The third century saint served as an elite soldier under Diocletian. When the Christian persecutions began, he faced death, too – but the first attack didn’t take, and he lived to confront Diocletian again. He’s named the patron saint of athletes in general because of his endurance and physical strength. There’s also Sebastian Coe, Olympic gold medalist and celebrated British middle distance runner, who helped bring the 2012 summer games to London.

Bird names like Raven and Wren have soared, opening the door for Lark, Kestrel, and maybe Swift, too. It’s also a surname – think Jonathan Swift or Taylor Swift. But this name means fast, and that makes it a possible choice for a runner’s child. This one might work better as a middle than a first.

The word means several different things, but there’s a strong association with a running track, as well as the category of sports known as Track and Field. Track has the same brief, brisk style as Chase and Dash, but is much less common in the US.

Are you a runner? Would you consider any of these baby names for runners? 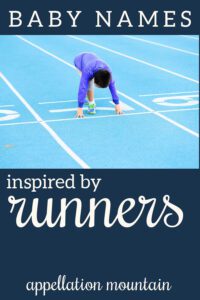 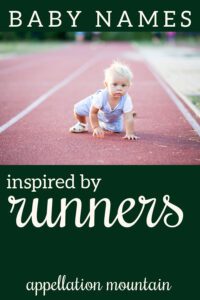