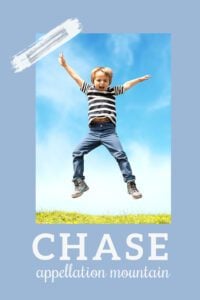 Thanks to Lia for suggesting our Baby Name of the Day.

The baby name Chase started out as a surname, usually given to a hunter.

In French chasser means “to chase.”  As in hunting. It shares Latin roots with our words catch and capture.

As time passed, chase also became a noun, referring either to the hunt itself, or to the lands where the hunt took place.

Eventually we could chase lots of things, not just prey.

All of that makes the baby name Chase active and energetic.

But it also feels at home in a boardroom, a preppy hellraiser name.

That’s thanks to Chase National Bank, founded in 1877 by John Thompson. Thompson named his bank after US Treasury Secretary and Supreme Court Chief Justice Salmon P. Chase – though Chase had nothing to do with Thompson’s venture.

By the 1930s, Chase became the largest bank in the US.

Nearly a century later, it remains top of the heap.

Technically, the bank’s name is JPMorgan Chase, following a series of mergers. But it’s normally shortened to Chase, a legacy name with a brisk, modern sensibility.

Nearly any surname will see sparing use as a given name, and that’s true for this name.

One possible influence: jazz rock band Chase scored a hit in 1971 with “Get It On.” (If jazz rock sounds odd to you, remember that Chicago struck it big around the same time.)

Anyway, the band was named for its leader and trumpet player, Bill Chase. On television performances, he’d introduce the band, noting that it shared his name.

Tragically, several band members, including Bill, died in a plane crash in 1974.

In 1973, NBC series Chase ran for a single season.

It starred Mitchell Ryan as Captain Chase Reddick of the Los Angeles Police Department. He led a unit tasked with solving the most impossible of crimes, often going undercover and chasing down suspects in spectacular races.

The baby name Chase slowly gained in use.

What explains the massive rise in use?

Actor and comedian Chevy Chase was born Cornelius. His nickname came, in part, from “The Ballad of Chevy Chase,” an old folk song. He became a household name beginning in 1975, as part of the original cast of Saturday Night Live. All these years later, a younger generation knows him from his work on long-running sitcom Community.

Chase sounds like it might’ve gotten a boost from soap operas.

Indeed, in 1983, evening soap Bare Essence included a Chase on the show. (He was the husband to main character Tyger Hayes.)

There are almost certainly more, just enough to serve as scaffolding, reminding parents about the baby name Chase as it became a mainstream favorite.

He was Rookie of the Year in 2016, and has won many a race since then. It’s a perfectly appropriate name for the champ.

But for many parents – and their young children – the baby name Chase has a very different association.

Since 2013, Chase is part of the team of search and rescue dogs who save the day on animated series PAW Patrol.

If you know your pups, he’s the German Shepherd in the police cruiser.

The series is currently headed for a ninth season.

Confident and high-energy, the baby name Chase has become a go-to choice for parents.

It offers just enough history to feel traditional. (It’s sometimes used as a Charles nickname, which ties the name to a bona fide classic.)

While it now sits just outside the current US Top 100, no question it’s a popular name for a son. Chase sounds like the star quarterback or the reliable best friend. It’s an approachable name for a child, and a traditional choice for an adult.

No surprise the baby name Chase continues to prove popular.

What do you think of the baby name Chase? 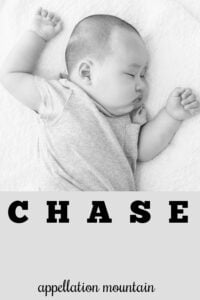