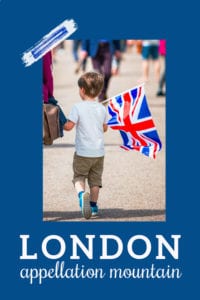 The baby name London brings to mind one of the world’s most storied cities.

Thanks to Lee for suggesting our Baby Name of the Day.

Unlike Savannah or even Camden, the baby name London is a relative newcomer.

Of course, the city is anything but new.

Romans settled the area way back in the first century, and it was town ages before they marched in.

The name’s meaning is obscure, but one possibility is “King Lud’s fortress.” Geoffrey of Monmouth penned a work that freely mixes history, legend, and fiction. He claims King Lud ruled the region in the days before the Roman rulers arrived, though he called it Trinovantum.

What we do know is that, by AD 50, the Romans called their settlement Londinium, and we’ve been debating the name’s meaning nearly as long.

One of my favorites: it refers to a temple of Diana previously located in the city center: Llan Dian. But that’s another wild theory without much evidence.

What we do know is that American parents have embraced place names for their children. Some locales, like Charlotte, Sydney, and Georgia, started out as given names – or surnames – first.

But others, like Savannah, were clearly borrowed from the map.

In the early 2000s, Paris Whitney Hilton became a household name. She’d appeared in gossip columns as early as 1993. But in 2003, she and fellow celebutante Nicole Richie co-starred in a reality series, The Simple Life. Paris and Nicole took regular Joe jobs … and failed at them, disastrously. It became a sensation.

So what does Paris have to do with London?

The traditionally masculine name rose in use in the 1980s – just as Savannah soared. It was an early place name favorite, and Hilton’s fame briefly pushed in into the US Top 200.

While Hilton and Richie weren’t villains, they didn’t exactly inspire you to name your daughters for them.

But if you’re thinking about the possibility of Paris as a child’s name, and ruling it out because of the reality star, then it’s only a short trip across the English Channel to London.

By 2005, Disney Channel original series The Suite Life of Zack & Cody gave the name London to their resident hotel heiress.

But it isn’t just that “London and Paris” are linked together in our minds, or that place names in general were gaining in use.

It helps that the early 2000s were the age of two-syllable, ends-with-n names, especially for boys. Landon peaked in the early part of the new millennium. Logan, Jackson, Mason, and all of the -aiden names were gaining, too.

For the girls, Brooklyn was rocketing up the charts. And names like Peyton and Madison were every bit as stylish.

And then there’s the reality that people love London. It’s been a destination for centuries. From Shakespeare to The Smiths, from Sherlock Holmes to Queen Elizabeth I, we all know something about the city.

The 2012 London Olympics probably inspired some families – the name peaked for girls a year later.

As of 2018, just over 1,600 girls and 700 boys received the name. It’s falling rapidly for our daughters, but holding slightly steadier for our sons.

And that seems about right. While usage suggests that most Londons are girls, it’s an inherently unisex name.

Overall, the baby name London benefits from a certain easy cool. It’s tailored and modern, but drenched in history at the same time.

Would you consider the baby name London? Do you like it better for a boy or a girl?