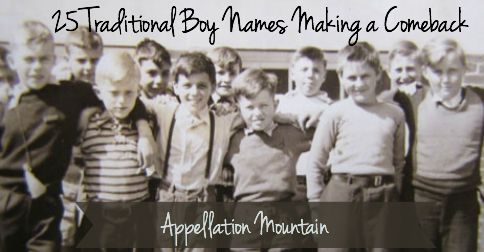 When is a baby name back? These 25 traditional boy names show signs of revival, but none have cracked the US Top 100 – yet. Many of them may still feel dated, even fusty.

But choose one of these names for your son in 2015 or 2016, and there’s a good chance that you’ll be safely ahead of the curve. These names are the future Olivers, Maxes, and Henrys, traditional boy names that are very much on trend today.

To make the list, a name had to be:

Looking for traditional boy names that aren’t as popular as William or James? Read on!

Clyde – More retro than Kai, less expected than Jack, Clyde was among the fastest-rising boys’ names in 2014, gaining nearly 200 places to reach #804 in 2014. Clyde’s heyday was back around the turn of the twentieth century, and the name left the rankings after 1998. Now, bolstered by a television miniseries about Bonnie and Clyde, and fueled by our affection for short names for boys, Clyde is making a comeback.

Alfred – He’s been Batman’s faithful manservant for years, but that didn’t help Alfred feel fresh and new. After peaking in the 1910s, Alfred had slipped to very edges of the rankings by 2013. But this name surged over 150 places to #799 in 2014. If this continues, could Alfred return to the US Top 50? Never say never …

Harvey – You love Henry, but you already know three! What’s a parent to do? Turn to the slightly more offbeat Harvey, a name previously attached to an invisible rabbit in a Jimmy Stewart film. After years on the brink, Harvey exited the US Top 1000 entirely after 2000. The name returned in 2011, and has rapidly climbed to #493, vaulting over 120 places from 2013 to 2014 alone.

Clark – Clark went from trailblazing surname to Hollywood leading man to Superman’s shy alter-ego. Now it’s among the traditional boy names on the rise, climbing 75 places to #382 last year. If you’re crushed that Max is so popular, Clark could be the name for you.

Lionel – Leo is one of those traditional boy names that has made the transition from the retirement home to the local kindergarten. Over the last few years, both Leo and Leonardo (thank you, Mr. DiCaprio) have felt fresh and new. Now debonair Lionel is following. An earlier generation might have thought Richie. Today, it makes me think Old Hollywood, as in Drew’s ancestor, the legendary actor Lionel Barrymore. The name rose more than 70 places to #660.

Otto – Hannah was once the hottest of the palindrome baby names. Now that distinction might belong to Otto. The once-clunky Germanic moniker climbed nearly 70 places to #627 in 2014. The entire family of names has garnered more attention in recent years, with names like Otis and Ottoline appearing on high profile birth certificates, too.

Harold – Yes, Harold! Harold was the last Anglo-Saxon king of England. And in recent years, it’s been the go-to name for a quirky character, the absent-minded professor. But hear it on a child, and it’s surprisingly right. It could be shortened to Harry or even Hank, but the little Harolds that I’ve met all wear the name in full. Harold rose over fifty places to #828 in 2014. Ernest – Jane Austen’s Emma helped the literary heroine name reach the top spot for girls. Author Harper Lee’s name is a sensation, and our affection for Atticus Finch boosted the character’s name in recent years – at least until we learned Finch had another side. So why should Ernest, as in Oscar Wilde’s The Importance of Being Earnest, be the next literary-boosted favorite? And that’s not even considering literary giant Ernest Hemingway – pictured to the right. In 2014, the name rose over fifty places to reach #880.

Warren – Kennedy and Carter, Lincoln and Reagan. We do like our presidential names, but does Warren count? Warren Gamaliel Harding was the 29th President of the United States, and he was very popular right up through his death in office in 1923. But scandal erupted after his death, and his reputation is mixed. So maybe we’re not naming our sons after Harding at all, but instead embracing the surname name afresh. In 2014, Warren rose over forty places to #432.

Theodore – Along with Alvin and Simon, Theodore has long been in baby name style limbo, suitable for singing chipmunks, but not for real boys. Those days are over, with Theodore rising over 40 spots to #126 in 2014. While it doesn’t quite feel like the rest of the traditional boy names, just Theo has also quietly caught on, reaching #509 in 2014.

Hugh – Julian, Luke, Lucy, Luna – we do like the ‘oo’ sound that is brought to us by the letter u. Factor in actors like Hugh Grant, Hugh Dancy, and Hugh Jackman, and it’s a surprise this name didn’t catch on sooner. As of 2014, Hugh was up over forty places to #869. At #438, the ‘o’ ending Hugo is even more popular.

Franklin – We talked about another first name borrowed from the White House earlier on this list. Could Franklin – as in Delano Roosevelt – be on the rise thanks to the former Commander-in-Chief? Maybe. Or maybe it’s our growing affection for Francis names. Or perhaps we’re just looking for fresh, two-syllable, ends-in-n surname style choices for our sons. Whatever the reason, Franklin was up over forty places to #453.

Lewis – When it comes to traditional boy names, Lewis is more typically the surname form, and Louis the given name spelling. But they’re both on the rise in 2014. Lewis was up over forty places to #597, while Louis – which brings to mind legendary jazz musician Louis Armstrong, as well as young British Prince George Alexander Louis, rose over twenty-five spots to #289. One reason some American parents may prefer Lewis? While Louis can be pronounced like Louie, Lewis always takes the ‘s’ – and from Miles to Brooks, many a popular name fits that mold. 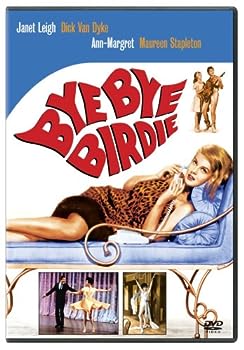 Conrad – In the 1960 musical Bye, Bye Birdie, fans of the Elvis Presley-inspired fictional rock star chanted “We love you, Conrad, oh yes, we do.” But the Germanic Conrad had peaked back in the 1930s, meaning that the name was already waning when the musical debuted. Since then, there hasn’t been much love for Conrad – but with the name leaping forty places to #649 in 2014, that’s changing.

Julius – We do like those ancient names, so no wonder Julius – as in Caesar – is on the move. With cousin Julian firmly established in the US Top 100, Julius climbed nearly forty places to reach #309 in 2014. My favorite fact about this name? Julius is also the name of the monkey on all of the Paul Frank merchandise, if you’re looking for a built-in nursery theme.

Cedric – Harry Potter boosted many a name, including the celestial Luna. Cedric was a heroic and ill-fated Hogwarts student who competed with Harry in The Goblet of Fire. A young – and then unknown – Robert Pattison played Cedric in the movie adaptation, pre-Twilight. Originally it was another book that launched the name – Sir Walter Scott’s 1819 historical novel Ivanhoe. Whether this is a literary choice along the lines of Ernest, or a pop culture one, Cedric was up a full thirty places to #785 last year.

Felix – Friendly, happy Felix has that modern letter x, but a history longer than many names. It’s gone from quirky animated cat to cool, edgy option in the last few years. As of 2014, Felix ranked #267, up nearly 30 spots from the year before.

Francis – When it comes to traditional boys names, Francis feels like one of the obvious choices. Many a Francis has answered to Frank. But lately, it’s Francis in full that feels fashionable once more. Some of the credit certainly goes to the popular pope. But, like many of the names on this list, it’s also true that they feel fresh in 2015 simply because they spent so many years feeling anything but. Francis was up more than twenty-five places to #478 last year.

Leonard – Leonard Cohen, Leonard Bernstein, Leonard Nimoy. You can probably name plenty of men with this name, but until recently, few of them would have been born in recent years. But Leonard – the name comes from the Germanic elements meaning lion and hearty, and has been given the poetic meaning “lion-hearted” – is yet another of the traditional boy names on the upswing, climbing 25 places to #662.

George – If Pope Francis gets partial credit for the rebound of Francis, is Prince George the reason George bounded more than twenty places to #134 last year? Maybe. But with Pope Francis, it’s reasonable to assume that Catholic parents might be inclined to name their child after the pontiff. With George, it seems possible that some parents might reject the name for fear of copying Kate. This makes me suspect that George is, like Francis, a name that’s just plain ready for revival.

Russell – To me, Russell is the biggest surprise on this list. It’s a surname name associated with the color red. But I debated whether it fit with traditional names for boys. After all, surnames like Logan and Landon strike me as relatively new names. But Russell has been in the US Top 1000 every year since 1880, so I think it meets most of the criteria set out above. The one way that Russell falls short? It was the US Top 100 through the 1980s, meaning that Russell is more dad-name than fresh possibility. And yet, Russell was up more than twenty spots to #408 in 2014. Is that a sign of a comeback, or just a blip?

Dean – James Dean is eternally cool, but Dean was dated until, oh, about 2008. That’s the year that the name clearly reversed its slide into obscurity and started to climb once more. Like Russell, Dean was popular more recently than Harvey or Clyde – the name ranked in the US Top 100 as late as 1969. But a mix of factors is bringing the name back sooner than might be expected. There’s a minor character by the name in the Harry Potter series, and, more importantly, Jensen Ackles’ character on long-running television favorite Supernatural. The story of demon-hunting brothers Sam and Dean debuted back in 2005 and is still going strong. In 2014, Dean ranked #221 – a climb of nearly twenty places from the year before.

Arthur – Not so long ago, Arthur was your grandpa’s name. But in recent years, the name has reclaimed its regal roots. Thanks to our affection for ends-in-r names, Arthur feels on trend. The Camelot connection makes the name legendary and literary. No surprise that Arthur is up for another year, reaching #306 in 2014.

Bruce – Bruce was the name of the mechanical shark in Jaws, and the Finding Nemo great white was called Bruce as a hat tip to the other big-screen beastie. Robert the Bruce makes it a Scottish heritage choice, while Bruce Springsteen lends the name a double scoop of Americana. But Springsteen also made me wonder if Bruce was really back. The answer is a cautious yes. Bruce left the US Top 100 after 1970, reached an all-time low of #532 in 2010, and has quietly started climbing since. As of 2014, Bruce was up nearly twenty places to #401.

Howard – Confession: Howard makes me think of Howard the Duck. And yet. I do see the appeal of this name. A Top 100 staple through the 1950s, it is undeniably a traditional boys name. It has history galore, as a surname and a given name. And Howie doesn’t feel like such a crazy thing to call a kind when Henry is at the height of fashion, and Harvey also has a place on this list. After decades of falling, Howard left the US Top 1000 after 2012, but was back in 2014. Maybe it’s too soon to call Howard ready for revival, but with Harold and all the other H names on this list, it felt right.

What’s your favorite of the traditional boy names? Are there others that you would add to this list?