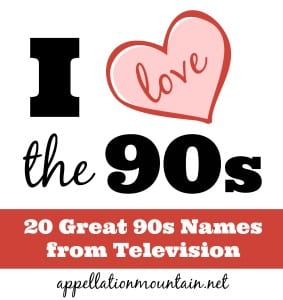 All four of those names have something in common: every one of them appeared on television at some point – or several points during the 90s.

Many parents wouldn’t love the idea of choosing a television-inspired name.  Song lyrics, yes.  Literature, of course.  Maybe even a great movie with a cult following, or a legend from Hollywood’s Golden Age.  But television?  It seems too … obvious.  Not very inspired.

And yet, the numbers suggest that television launches more names than any other medium, for exactly that reason – it’s accessible, and even in our age of nearly infinite channels, it is surprisingly universal.

That was even more true in the 90s, early days for cable network original series and before-Netflix and Amazon joined the fray.

Plus, it’s probably true that we do much of our television-watching in our younger years.  I never missed The Facts of Life in the 1980s, but by the 1990s, I was living on my own – without cable for a big chunk of the decade.  The names that influenced me were the ones I saw between, say, my tweenage years and my early 20s.

And so if you were young in the 90s, chances are that you’ll recognize every one of the shows on this list, and probably some of the character names – even if you haven’t seen a single episode.

If you did see an episode – or one hundred? – maybe some of these names will have made it to your short list.

Sabrina – As in Sabrina, The Teenage Witch. The show aired from 1996 through 2003, moving from ABC to the WB in the process.  Melissa Joan Hart played the teenaged spell caster, and the series featured lots of great names, for witches or mere mortals – Zelda, Libby, Roxie.

Topanga – Probably the most daring and distinctive choice on the list, borrowed from ABC’s Boy Meets World.  Topanga is a California place name, meant to emphasize the character’s hippie roots when she first appeared on the series.  But Topanga has grown up, married the world-meeting boy, Cory, and now the couple appears in new Disney Channel series Girl Meets World, about their daughter, Riley.

Blossom – Here’s another outlandish(ish) entry – and a great 90s name!  Mayim Balik played the title role on Blossom from 1990 through 1995.  Her brothers were Tony and Joey; we learn during the series that her musician father named her after jazz singer Blossom Dearie.  This wasn’t the show’s only stand-out character name, though. Blossom’s BFF answered to Six.  Bonus points: The Powerpuff Girls cartoon debuted in 1998, featuring tiny superheroes named Bubbles, Buttercup, and Blossom – she’s the one in pink.  A forerunner of many a pan-botancial name in use today.

Phoebe – Another doubleshot of a great 90s name, this one famously worn by both Friends’ ditzy but lovable Phoebe beginning in 1994, as well as Charmed’s Phoebe, sister to Piper and Pru, starting in 1998.

Xena – Lucy Lawless played a fierce warrior, a spin-off from Kevin Sorbo’s Hercules-centered series.  The name fared well during the show’s 1995 through 2001 run, leaping from obscurity to briefly rank in the US Top 1000.  But Xena also ushered in an age of high value Scrabble letter names for girls, from Ava to Zoe.

Dot – Can you name your kiddo after a cartoon character?  Animaniacs unleashed the Warner Brothers – a pair of 1930s cartoon characters named Yakko and Wakko, as well as the Warner Sister, Dot.  The trio was locked away in the studio’s water tower at the height of their stardom in the 1930s, only to escape sixty years later.  It was daffy and wacky and silly, but oh that 1930s name, Dot!

Meadow – Did you know that The Sopranos debuted in 1999?  Maybe it’s really an early 2000s show, but let’s pretend and add Meadow to this list anyhow.  In a series chock full of conventionally Italian names like Tony, Corrado and Adriana, Meadow is an outlier. Felicity – Keri Russell’s breakout role was as college freshman Felicity, moving across the country from California to the fictional University of New York against her parents’ wishes.  After a 1998 debut and so much buzz, the series ran for four years and continues to appear on best television shows of all time lists.  Her lacy, virtue name has fared well, too.

Winnie – Oh, The Wonder Years!  Running on ABC from 1988 through 1993, though set in the 1960s, the series introduced us to the Arnold family, and lovely girl-next-door, Winnie Cooper.  When Jimmy Fallon announced that he’d named his daughter Winnie, Miss Cooper was one of the inspirations he cited.  Formal name options abound, but in the age of Sadie, Winnie stands on her own nicely.

Daphne – Frasier was a 90s favorite, debuting in 1993, that picked up where 80s favorite Cheers left off.  Daphne Moon, though, was a new character in 1993, a caretaker for Frasier Crane’s pop, Martin, and eventually a love interest for Frasier’s baby brother, Niles.

Slater – Few series defined the decade as well as Saved By the Bell.  All of the characters were memorable, but there was only really one name that stood out – the surname of Mario Lopez’s character, A.C. Slater.  Slater didn’t catch on in the 90s, when Tyler was on top – could the name rise with Archer, Asher, and others ends-in-r choices for boys?

Dawson – As in Creek.  The WB series premiered in 1998, and ran through 2003.  There were lots of interesting names on the series – Pacey, Joey on a girl.  But Dawson was the main man, played by James Van Der Beek.  Unlike many of the names on this list, Dawson actually did rise in the 1990s.  Today he’s maybe a smidge too tied to the series.  But it’s an interesting way to honor a David, and kids born in 2015 will probably never think of the Creek.

Walker – Confession: the first time I took Walker seriously as a baby name was when it was used as a joke in the Will Ferrell movie, Talladega Nights.  Race car driver Ricky and his wife Carly have sons named Walker – and Texas Ranger.  But it’s also the ‘W’ in former presidents George Walker and George Herbert Walker Bush, and an occupational surname with a long history of use.  It’s among the most popular of the W surname names in vogue today.

Dexter – Yes, the creepy Dexter Morgan didn’t debut on television until 2006.  But the animated Dexter’s Lab arrived in 1995, featuring boy genius Dexter, tormented by his unicorn-loving sister Dee Dee and a world generally inhospitable to brilliant grade schoolers.  It didn’t do anything for the name, but today Dexter feels very wearable.

Holling – Here’s a rarity that’s never caught on – and probably never will.  Remember the name of the bar owner on Northern Exposure?  Holling Vincoeur.  Given the character’s age – sixty-something – and the fact that he was a supporting cast member, maybe it’s no wonder Holling failed to inspire.  And yet, it’s less Abercrombie than Hollister, more obviously masculine than Hollis.

Wilson – Love William, but want something a little different?  I loved the name of the never-fully-seen neighbor in Home Improvement: Wilson.  His name was much more interesting than Tim Taylor and his boys’ names: Brad, Randy, Mark.  Want another pop culture association for the name?  In 2000 hit flick Cast Away, Tom Hanks’ stranded character talks to a volleyball – called Wilson.

Augustus – Harold Perrineau, Jr. played Augustus Hill on gritty HBO original series Oz beginning in 1997.  Augustus is the series’ narrator, and also a generally decent person – despite his imprisonment for drug dealing.  Perrineau’s character adds a different side to the ancient, saintly appellation.

Fox – Fitting that The X-Files would have a main character named Fox.  American parents were about to fall in love with the letter x, and with nature and word names, too.  While Fox was a rarity in 1993 when the series debuted, today Fox is hot.

Xander – Another X-centric name launched by the small screen in the 1990s, Xander was one of Buffy’s BFFs on Buffy the Vampire Slayer.  Unlike most of the series’ characters, Xander had no special powers – though on several occasions, his regular guy qualities would save the day.  The character’s full name was Alexander – but he was almost always referred to by the truncated version.  The series debuted in 1997, and Xander cracked the US Top 1000 in 1999.  Chalk another one up for Joss Whedon.

Carter – E.R. was a sensation when it debuted in 1994, and it ran for an astonishing fifteen seasons.  Noah Wylie’s character, John Carter, was a medical student when the series debuted, but he graduated to full doc over the character’s eleven seasons on the show.  Even though Carter was his surname, the character almost never answered to John.  It’s the popularity of E.R. and Wylie that helped propel Carter from preppy-surname-name on the rise to Top 100 staple.

Aidan – Okay, I’m cheating – this is name number eleven on the list!  I had this whole post written when I realized I’d left off Aidan!  Sex and the City was another HBO original series, debuting in 1998.  Carrie Bradshaw and her gal pals made Manolo Blahnik a household name, and introduced John Corbett as a furniture designer called Aidan as her love interest.  The name was already a stylish successor to Ryan and Brian, but now it was about to ignite a trend that would dominate the coming decade.

What are your favorite great 90s names from television?  Are there names that should be on this list?