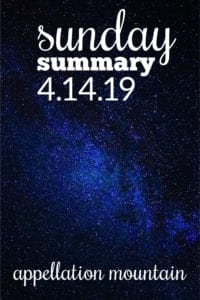 Katie Bouman photographed a black hole, a feat never before accomplished in all of human history.

Okay, not just Katie Bouman. But in a field dominated by men, Katie – who holds a PhD in computer vision – went viral after a post showed her delight at her team’s success.

Last weekend, my daughter’s scout troop – about a dozen 10- to 12-year old girls – visited NASA Goddard. The gap between those middle school girls and Katie has never felt smaller.

Which has what to do with names, you ask?

We often focus – and rightly so – on finding strong names for our daughters. Nothing too cutesy, we insist. We’re raising future women of dignity and accomplishment, not aspiring pop stars.

Except the pool of names appropriate for a female heart surgeon/Supreme Court Justice/Fortune 500 CEO can feel tiny. Most of the true classic girl names pass the test. These do, too:

But it’s still a tiny sliver of all the names.

Katie, as it happens, does not appear on these lists. Neither does Nancy (Pelosi) or Ginni (Rometty, the CEO of IBM). Continue to name women of accomplishment, and you’ll quickly see that while there are Ruths and Marys and such sprinkled among them, plenty of women wear names that we’d never associate with their positions of power and influence.

Our fictional Secretary of State is named Elizabeth. But in reality? Condoleeza works, too.

And while yes, Katie Bouman is actually Katherine Louise, she hasn’t felt the need to shed the cute Katie to succeed in a male-dominated field.

So maybe the problem isn’t the names. Maybe it’s our perception.

Do we hear traditionally feminine names and think that Arabella or Evie or Gianna or Lula can’t possibly be a CEO or a successful politician or a scientist who breaks new ground?

Because Katie reminds us that it’s very possible. 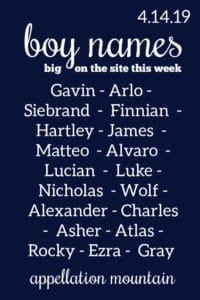 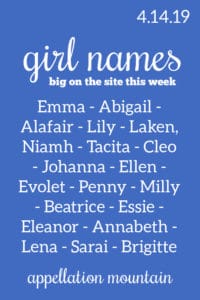