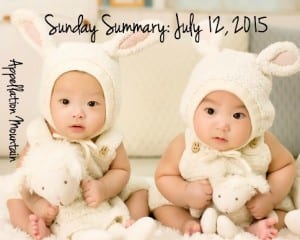 We finally saw Inside Out this weekend, and wow! I was prepared to like it, but I loved it. I mean, I was in tears loving it most of the time. Part of it was the main character, Riley. She’s an 11 y.o. ice hockey player. Since my oldest is a 10 y.o. ice hockey player, some of it really hit home.

It was a Pixar movie, and so, naturally, I was among the last in the theater, reading the credits obsessively. Accounting, Craft Services, and finally – yes! – production babies. But they went by so fast. Way too fast! I noticed at least four Olivers and more than one Wyatt. Did anyone namespot any great names?

I may have to go see it again just to get a good look at the list!