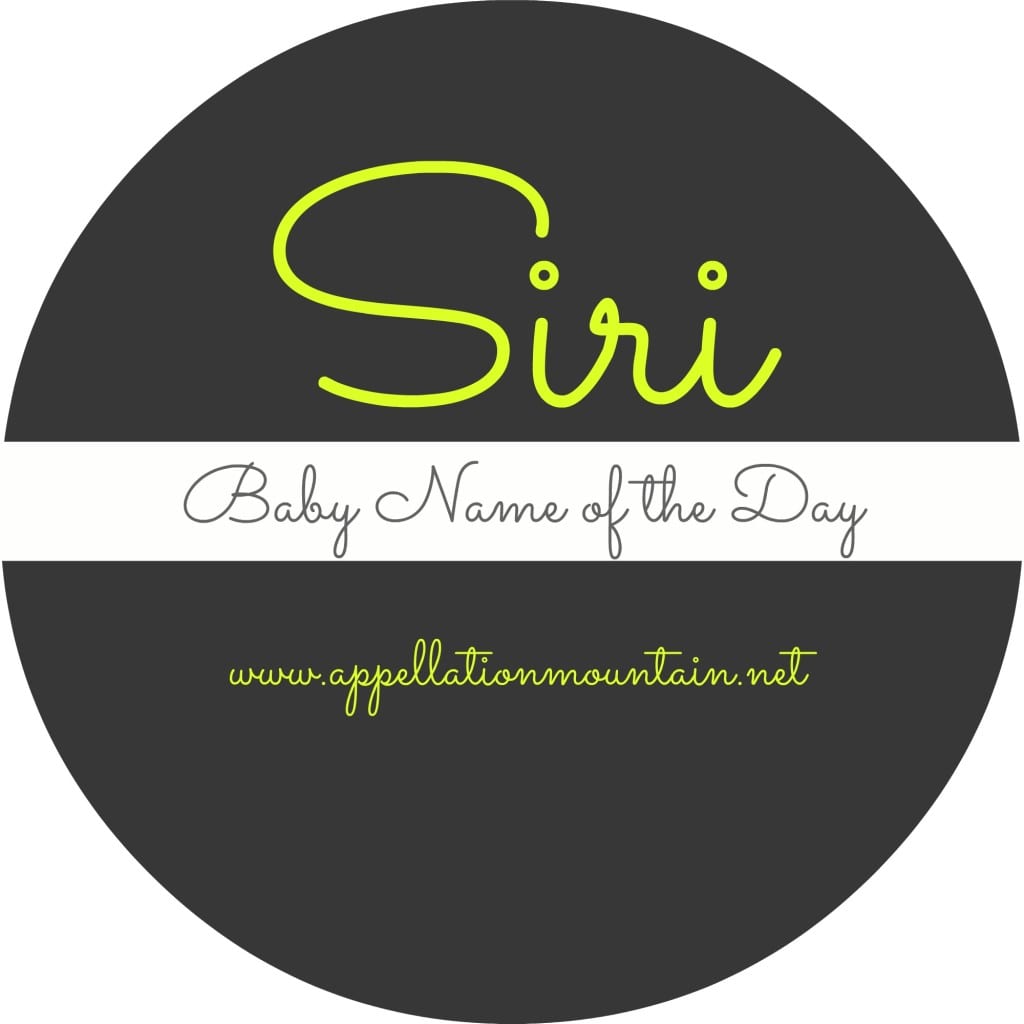 Thanks to Angela for suggesting Siri as our Baby Name of the Day.

Siri is a given name, one known in Scandinavia for ages. The Apple engineer who christened her knew that.  He’s Norwegian.  And maybe a little bit of a name nerd, too, because Dag Kittalaus wanted the voice recognition program to have a great name, and argued for Siri with Steve Jobs himself.

I’d heard was that Siri stood for Speech Interpretation and Recognition Interface, but apparently that was reverse engineered.

If Dag was familiar with Siri – he’d shortlisted it for a daughter’s name at one point – it seems like he also appreciated her tough girl meaning.

Siri is short for Sigrid, which comes from an even older Norse name, composed of the elements sigr – victory and fridr – beautiful.  Sigrid shares her second syllable with Ingrid and Astrid.

As a given name, Siri stands on her own, especially in Sweden.  In Finnish, she’s Siiri.  She generally enjoys use throughout Scandinavia.

It was a different story in the US.  Siri had some sparing history of use – there were a dozen or more born most years from the 1940s onward, rising to more like three dozen by the 1990s.

The name got a big bump in 2006, the same year Suri Cruise was born.  Did lots of parents turn to baby name books, looking for newest celebrity name, and fall in love with Siri instead?  Maybe.  Apple didn’t even launch their project until 2007, and it first became available as an app in 2010, so that wasn’t it.

Since 2006, more than one hundred girls have been given the name every year.  It’s not clear that she’s trending upwards, but it does appear that a combination of the new technology and little Miss Cruise have boosted Siri’s profile.

There have been a few high-profile Siris in recent years:

All of this pales compared to Sweden’s most famous Siri.

Sigrid Sofia Matilda Elisabet von Essen was a well-born noblewoman.  She married young, divorced, and then scandalously re-married, this time to influential playwright August Strindberg.  Women of her station did not divorce and marry writers.  Their marriage was tumultuous, and influenced many of Strindberg’s works.  What’s more, the new Mrs. Strindberg had always wanted to act, but it was unthinkable.  Now she was free to pursue a life in the theater, and she did.  Her husband even wrote a few roles just for her.

From the early twentieth century actress to the brave new technology, Siri is a fascinating possibility – rooted in history and tradition, but blazing new trails, too.  If you’re after a modern and daring name for a daughter, she’s one to consider.