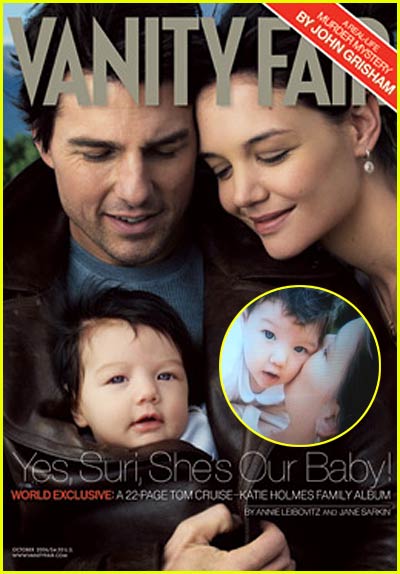 She often makes the list of crazy celebrity baby names, but guess what?  As of 2012, this choice was poised just outside the US Top 1000.

Our Celebrity Baby Name of the Day is Suri.

Before the Prince of Wales was married, back when Angelina Jolie only had two children, a few weeks before Gwen Stefani became a mom, there was the TomKat pregnancy watch.  The year was 2006, and we’d watched the marriage of Tom Cruise and Nicole Kidman disintegrate via magazine covers and gossip blogs.  Then there was the whole Oprah couch-jumping episode.  E! ranked the romance of Tom and Katie #2 on their list of 100 Best Things in Pop Culture.

The A-listers were among the first to keep mum about baby’s arrival, though that’s since become more and more common.  (And more and more difficult, when your celebrity BFFs will accidentally leak your name on Twitter, Gwyneth, and paparazzi camps outside of hospitals.)  Then – at last! – came the Vanity Fair cover story, complete with photos.

In the article, Tom claimed that the happy couple stumbled on Suri in a baby name book, and loved the meaning – red rose – instantly.  It was a little bit of a backtrack from their initial statement, which claimed Suri was Hebrew for princess.

Which is true?  Speculation abounds.  Among the many possibilities:

Even more interesting, the name had some use pre-TomKat.  Six girls received the name as far back as 1958, and 20 newborn girls were named Suri in 2004.  There’s a lemur voiced by Hayden Panettierre back in 2000’s Dinosaur.  Other characters were called Aladar, Kron, Plio, and Yar – fanciful inventions, all.

Suri also brings to mind Surrey, as in southeastern England, and the horse-drawn carriage originally manufactured there – fringe on top optional.

None of this makes Suri an especially appealing choice, but she’s been on a steady climb since Miss Cruise’s 2006 arrival.  184 girls received the name that year.  By 2012, she’d reached a new high – 241 newborn Suris.  It is almost certainly due to the non-stop coverage of the famous Suri.

Besides all the press generated by the little miss, could Suri’s sound be on trend, too?  No, we’re not embracing Yuri or Murray.  But we do seem to like Rory for girls, along with Siri for smartphone assistants, and short names in general.

Suri is one Hollywood choice that has gone from “what were they thinking” to “hmmm … we like that name, too.”