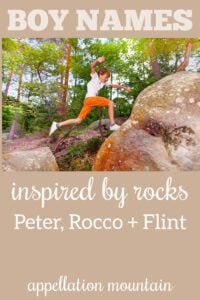 Rock names for boys include everything from classic Peter to straight-up, well, Rock.

Many of these feel like nature names. But some fit into the surname category. Others are straight-up saintly.

One thing rock names for boys all have in common? Undeniable strength.

Maybe it helps that Dwayne Johnson – one of the biggest stars of our day – is known as The Rock.

So if you’re into the great outdoors or geology or maybe rock n’ roll, chances are that some of these names might appeal.

While rock names for boys might sound novel, they offer considerable history:

Ready for the rock names?

The Celtic word crag refers to a rocky outcrop, rugged land. Craig is a name derived from crag, a 1960s favorite.

The Old English element haer means rock. Harlow is originally a place name derived from haer, and it has some history of use as a boys’ name, though it’s more popular for girls today.

The ultimate rock name with Biblical roots, from the Greek petros – rock.

A dashing surname spin on Peter. Pierre, Per, and Pedro are three more.

The –ston ending on lots of names can mean stone, like Winston.

If Flynn follows Finn, could Flint catch on, too?  It’s a form of quartz that sparks when struck. In the 1960s James Coburn played a James Bond-parody character called Derek Flint.

Sure, it’s a popular material for kitchen remodels. But Granite is also very much part of the natural world, favored by climbers from Yosemite to Patagonia.

Among the most stylish of the possibilities, Jasper is also a form of quartz.

Too much?  Maybe.  But if Jet, Orion and Gideon are wearable, Obsidian isn’t impossible.

Go with just Rock, and there’s no doubt.

Like Shane, Shale has a softer sound. But it seems very wearable.

There’s something dramatic about a boy named Slate. Blank slate, clean slate, the online magazine … There’s also Slater, an occupational surname for someone who covered roofs with slate tile.

Nearly as obvious as Rock, but slightly more familiar thanks to anchorman Stone Phillips.

It sounds like jagged – rough, uneven – just like crag and Craig. Actually, Jagger is an occupational surname, another word for a peddler. And of course there’s Mick Jagger, legendary frontman of The Rolling Stones.

A saintly Italian heritage pick that doesn’t actually mean rock. It comes from the Germanic element hrok – rest.  The saint was French, but the Feast of St. Rocco is associated with Italian immigrants in the US, thanks in part to traditional celebrations – and a famous scene from The Godfather II.

A respelling of Rocco, made famous by an animated wallaby in a Nickelodeon series from the 1990s, Rocko’s Modern Life.

What do you think of rock names for boys?  Are there any that you would use?  Have I left any off this list?

First published on January 4, 2013, this post was substantially revised and re-published on March 2, 2022. 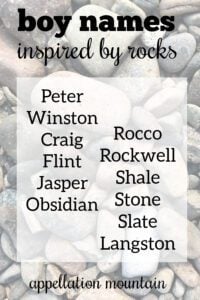