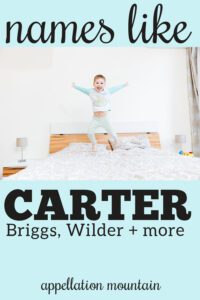 Carter appears in the US Top 1000 for most years with data available, way back to 1880. But it soared in use beginning in 1994, thanks to the debut of smash-hit television series E.R. John Carter – almost always referred to as simply Carter – started out as a medical student, and eventually becomes a talented doctor.

By now, the name has ranked in the US Top 100 for  a dozen years and counting. Even if you love it, you might feel that the name is just too common – or already taken by a friend or family member’s child.

What makes names like Carter? They’re preppy and a little bit buttoned-down. After all, that was true of Dr. John Truman Carter III. But they’re also capable. After all, the occupational surname was earned by someone who drove a cart – the old-school equivalent of today’s UPS drivers. And Carter Oosterhouse started his television career in 2003 as a carpenter on TLC home improvement series Trading Spaces. That definitely lends the name a can-do vibe.

So we’re looking for surname names with a certain amount of polish, but also a lot of strength.

These dozen names like Carter share some of the popular name’s style, but remain distinctively different, too.

Briggs feels rugged, as it should – it’s cousin to Bridger and Bridge. While the surname boasts history galore, it’s a newcomer to the popular first names list. It first cracked the charts in 2012. Briggs fits with names like Carter because of its vibe, but it has one special quality: that final s. With Brooks and other -s ending boy names feeling fresh and interesting, and ends with -er boy names becoming more dominant, Briggs might feel like a refreshing replacement thanks to sound, too.

With a mix of athletic and artistic associations, Calder might appeal to a great many parents. It easily substitutes for sound-alike Carter, but comes with a bonus: built-in nickname Cal. Calder shares Scottish roots with names like Cameron and Mackenzie, but doesn’t feel too specifically like a heritage choice. If you’re an ice hockey fan, you know this name has special meaning, thanks to the Calder Trophy, given to the NHL’s Rookie of the Year. While a handful of uses have raised the name’s profile slightly in recent years, Calder remains an underused gem.

Every bit as crisp and clear as Carter, Clark fared well in the first half of the twentieth century, back when Carter was still rare. That early-1900s popularity explains Hollywood icon Clark Gable, as well as Clark Kent, the name of Superman’s alter-ego. With the generation that grew up on Smallville now naming babies of their own, no surprise that Clark feels like a logical choice. That mix of man-of-steel and Oscar-winning associations makes this a substitute for handsome, capable Carter. One more fun reference: there’s a candy called the Clark Bar, named for creator David L. Clark.

Perfectly preppy Fletcher might wear boat shoes and a blue blazer. Except the name refers to weapons, via the Old French fleche – arrow. Back in the day, a fletcher was an arrowsmith, and that lends the name a slightly different quality. With that -er ending, it feels like an obvious substitute for the much-loved Carter.

Most of the names like Carter share that stylish -er ending. But a distinctive ending sound might appeal to many parents – after all, it’s not just Carter, but Hunter and Connor and Asher, too. Fielding started out as a surname for someone who lived in open country – in fields, as opposed to a town, forest, or another distinguishing landmark. Eighteenth century English novelist Henry Fielding gave us Tom Jones; many years later, Helen Fielding introduced the world to Bridget Jones. That makes it a little bit outdoorsy, a little bit literary – and an interesting alternative to names like Carter.

Like many surnames, Landry enjoys some use for boys and girls alike. With ties to a French saint – a seventh century Bishop of Paris, also known as Landericus – as well as legendary NFL coach Tom Landry, reasons abound to consider this name. It’s a Louisiana place name, too, which makes it feel just right for a Southern gentleman. Or maybe lady … Ali Landry makes it feminine; Friday Night Lights’ Landry Clarke pushes it back towards the boys. Like Carter, it feels traditional and modern at the same time.

At first glance, Parker enjoys much too much popularity to serve as a Carter substitute. After all, Parker entered the US Top 1000 back in 2009, and ranks in the Top 100 today. Except there’s no rule that says names like Carter have to be wildly unexpected. For many families, finding something just the tiniest bit less common works, because it means their son won’t share his name with another cousin or kid in the neighborhood. Parker’s outdoorsy vibe keeps this name down-to-earth, even though it has quite a bit of polish, too.

Spencer climbed in the 1980s, fueled by Lady Diana Spencer – the future Princess Di – and a host of other uses, like ABC detective series Spenser: For Hire. While the surname is spelled with a ‘c’ and an ‘s’, the ‘c’ is consistently far more popular as a given name. Spencer combines a certain preppy – even aristocratic tone – with humble origins. Once upon a time, a spencer worked in a pantry, helping to keep a great house well-provisioned. Because Spencer never became a huge hit, it feels like a substitute for Carter today.

Summer serves as a seasonal favorite for girls, light and bright. But Sumner makes an intriguing option for a son. As you might guess, the surname was given to one who summoned – specifically, called others to appear in court. It’s a popular place name, in Tennessee and Kansas, but also Oregon, Washington, a handful of other states – and even on the moon, where you can find Sumner crater. It seems slightly Southern, but also potentially meaningful. The idea of summoning or calling might make an appealing image for a child’s name. It’s on this list of rare 1885 names, lending Sumner a vintage vibe, too.

Like Carter, Thatcher reads as hard-working. After all, a thatcher repaired roofs with straw and similar materials, also called thatch. Both names have political ties, Carter to a former US president, and Thatcher to a former British prime minister. But the biggest boost for Thatcher probably comes from 2001 movie A Knight’s Tale, with Heath Ledger starring as William Thatcher, an aspiring knight from the wrong side of the tracks. With Theodore topping the charts, other Th- names might feel even more appealing.

In today’s language, Walker brings to mind romantic, meaning-rich names like Journey. We use phrases like “a spiritual walk.” And yet, it originates with the traditional practice of fulling wool – pounding the material with clubs, hands, or yes, feet – to cleanse and thicken it. It’s also the W. in George W. Bush and George H.W. Bush, so it’s yet another presidential pick. This mix of preppy polish and hard labor marks so many names like Carter.

Wilder arrived in the US popularity rankings just a few years ago, blending a certain outdoorsy feel with one that’s a little more dangerous – it’s a preppy hellraiser name. But that barely captures all the associations. There’s legendary Hollywood filmmaker Billy Wilder, comedian Gene Wilder, author Laura Ingalls Wilder, and Pulitzer Prize-winning author Thornton Wilder. While it’s gained dramatically in popularity since debuting in the US Top 1000, it remains far less common than Carter, and a worthy substitute.

Those dozen names like Carter could all be great substitutes. What would you add to the list?