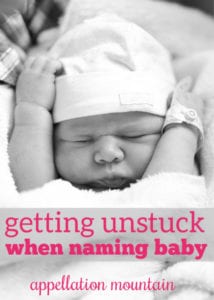 Here’s what my partner and I agree on for our first child, a girl, due in August.

We’re really struggling to come up with any names that fit. Can your readers help?

Here’s the thing: naming is a process of trade-offs. If you find a name you both love, it will probably check most of these boxes. But maybe not all.

I think it will be easier to find a name you love if you focus on the qualities you appreciate in potential names, rather than running it against the checklist and immediately disqualifying it from consideration.

That’s easy to suggest, but hard to do, right?

Let’s dive in and talk about some potential names.

Twentieth-century French author Colette makes this literary and just traditional enough. It’s appeared in the US Top 1000 many years, making it familiar. And it sits a few notches outside of the current US Top 500, so it’s far from common. I think that checks all of the boxes, except for meaning – but I have goods news there, too. Colette comes from Nicholas, via feminine form Nicolette, so it shares the meaning “victory of the people.” That feels just about perfect.

Strictly speaking, Greta comes from Margaret. But it feels like an independent name, not a nickname. And while everyone recognizes Greta, and it’s been in the US Top 1000 more years than not, it’s far from common, currently sitting outside the Top 500. Greta shares Margaret’s meaning: pearl. It’s on the right side of feminine, and I’d call it timeless rather than vintage.

Short and spare, Gwen feels like a modern name. But it comes with plenty of history. Just think of Gwendolen, a name belonging to figures like twentieth century poet Gwendolyn Brooks and a legendary ruler of the Britons, said to have reigned in the 11th century BC. Or, you know, Gwen Stacey from the Spider-Man universe. It has a great meaning: blessed.

Mae breaks one of your rules. It can be spelled May, like the month. But most of the time, the given name is M-a-e, as in West and Jemison, the astronaut. It’s bright and strong, a simple name that feels slightly vintage and with plenty of modern energy. In terms of meaning, it is sometimes short for Mary or Margaret. But I think the strong meaning comes from the month, which honors the Roman goddess of the spring, and all things new and growing.

Nothing too old-fashioned and nothing too modern? That’s a puzzle that Maren solves beautifully. Style-wise, it fits with lots of twenty-first century picks – surname names like Piper, tailored inventions like Laken. But it has plenty of history as a given name, used in both Dutch and Scandinavian languages. In the later, it dates to the 1600s. As for meaning, it probably relates to Marina, from the Latin “of the sea.”

Petra is the rarest name on this list, and arguably the most ancient. It was the name of a city in the ancient world, located in modern-day Jordan. But unlike Delphi or Pompeii, we don’t immediately equate it with the distant past. Instead, Petra sounds timeless. While multiple origins and meanings are possible, it’s often considered a feminine form of Peter, meaning rock.

A feminine form of Simon, Simone is the classic name that everyone knows, but no one uses. It’s nicely tailored, but undeniably feminine. And while Simon is a New Testament name of significant, French Simone seems far less connected to anything Biblical. Though the meaning – he has heard – might be too specifically religious for you to consider. There’s also, of course, the legendary Nina Simone, the inspiration behind John Legend and Chrissy Teigen’s daugther’s name: Luna Simone.

Sylvie comes the Latin word for the woods – silva. It sounds like silver, too, which adds a certain sheen. Sylvie fits right in with names like Avery and Ivy, but it’s far less common – just inside the current Top 1000 in the US. It’s feminine, but spare. And while it’s unexpected, it seems like the kind of name that would fit in today.

Overall, I think my favorites are Colette and Maren, as names that straddle the uncommon/ familiar line, and feel easy to spell and pronounce.

But the important thing now, I think, is not to focus on whether the names satisfy your criteria perfectly. I think it’s time to start thinking about qualities you like in certain names, and seeing what feels more like something that’s right for your family.

Readers, over to you – what would you add to this list? Are there any techniques you’ve used for getting un-stuck when it comes to names? 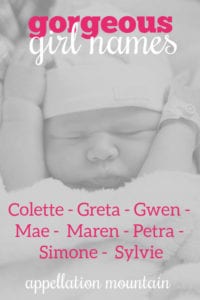