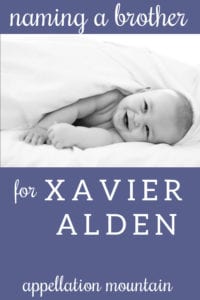 My husband and I are expecting our second son in March, and we have no names that we even kind of agree on.

Our first son is Xavier Alden. It took us until the very last minute to agree on it. My husband’s name is very unusual, and he’s sensitive about giving his kid a “weird” name.

On the other hand, I’ve always liked having a name that’s just a little different. (And I think his name is awesome, but he’s made me promise not to share it.)

If it were up to my husband, Xavier would’ve been Joseph or David. It’s not that they’re not good names, it’s just that they feel all used up by SO many Joes and Daves I know.

Plus, our last name is pretty common and short, so there are probably two dozen Joseph LastName already.

I really liked Gideon, Judah, and Felix, but the list of rejected names goes on and on. Can you suggest some boy names that my husband will agree are “normal” but aren’t dull?

How exciting to be expecting your second son – congratulations!

No matter what our personal preferences around names, I think there’s often so much more compromising required than we expect, right?

You’re absolutely right – there’s no such thing as a normal name!

It sounds like your husband wants a name that’s traditional, familiar, and easy to wear. You’re looking for something with history, but a little bit of flair.

Those aren’t bad qualities. After all, Xavier is a great name! So let’s see if we can find something that combines them again.

A note on popularity: Xavier ranks in the current US Top 100. (As of 2019, it’s #91.) But it doesn’t feel particularly common. Most of these names are around the same popularity level, but a few are rarer – because it’s possible for a name to be both instantly familiar and rather uncommon, too.

Dominic has a great rhythm. Nothing really sounds quite like Dominic. It’s ranked in the US Top 1000 every year since 1900, and yet it doesn’t sound nearly as classic – or common – as Joseph and James.

I wonder if a subtle connection between your boys’ names would appeal? Xavier and Everett sound different and distinct, but they share that stylish middle v.

On paper, Hugo is relatively rare. But everyone recognizes it and can spell it immediately.

Just like Xavier, Isaac stands out sound-wise. But it’s a Top 50 pick, about as common as Anthony, Luke, or Christopher – which feels pretty mainstream.

Halfway between Gideon and Joseph is Julian.

Malcolm is a rock-solid name for a son, traditional and never trendy.

A New Testament name with an outdoorsy meaning – forest – Silas feels like a modern favorite that’s fresher than David and James, but has every bit as much history.

Tristan left the US Top 100 after 2014, but it’s still widely recognized without feeling too common.

Overall, my favorites are Everett (I’m a sucker for that shared middle V sound) and Dominic (I just love the way it sounds with Xavier.)

But I know the community will have some great suggestions, too.

What would you name a brother for Xavier Alden?