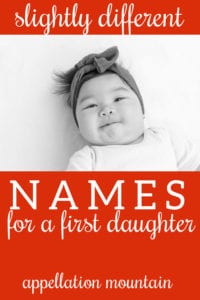 I was born at peak Ashley. My sisters are Jessica and Stephanie. My husband is Michael, and his sister is Ashley, too.

Now that we’re starting a family of our own, I very much want our children to have names that are all their own.

I’ve read what you wrote about popular names not being as common as they used to be. And I don’t want my kids’ names to be so different that they hate them.

We have nieces named Olivia and Lily/Lillian, and a nephew named Caleb, but those names are all a little more popular than I’d consider.

We’re expecting our first daughter in January, and I’m not sure where to start. Can you help us come up with a list of different, but not too different names?

Thank you in advance!

I think you’re honed in on the challenge. We want different. But what exactly does that mean?

Every family gets to define it for themselves. But let’s see if I can suggest a sweet spot.

I’ve called these Sweet Spot names, and I have a long list here.

Though lots of those names might be more popular than you’d probably prefer.

So I’ve looked a little farther up the list, but the same principles apply – immediately familiar, easy to spell and pronounce, and with a certain amount of history behind them.

As spare as Claire, but a little more modern instead of classic.

A rising favorite, Esme has history. JD Salinger gave the name to a character way before Stephenie Meyer ever imagined her world of vampire romance – though it’s Twilight that helped put the name on parents’ lists.

It sounds much like chart-topper Sophia, but Fiona also seems a little outside of the mainstream.

A tailored classic for a daughter, Helen topped charts from the 1890s well into the 1930s. Now it feels a little bit antique, but still strong and timeless.

A more modern alternative to Helen, with the same straightforward style.

An Old Testament place name meaning “peaceful,” Shiloh is also a Tennessee town remembered for a Civil War battle. That might feel like baggage, but somehow, Shiloh seems like a wearable choice, the right mix of storied and fresh.

A feminine form of William and an alternative to favorites like Ella.

That’s quite a varied list, right? It’s possible to find names of any popularity level to suit any style. I’m wondering if any of these jump out at you?

I’m inclined to suggest Maren and Blair, if only because they’re nicely on-trend, but far from overused.

Or maybe you’re drawn to the more traditional names on this list? You wouldn’t be the first Ashley to opt for something a little more vintage, like Willa or Helen.

Readers, over to you. What are your best suggestions – and names! – for a daughter that feel just slightly different?