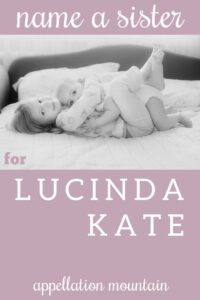 We have a 3 year old daughter named Lucinda Kate. We had planned to call her Lucy, but right now, she’s still mostly Lulu at home, and Lucinda with friends and family.

Kate is for my husband’s mom Kathleen, but I also just loved the way the names flow together.

What I love about my daughter’s name is that it’s a “real” name, but it’s not one that lots of people ever hear. I like that she can choose a nickname. And I love how romantic and just plain fun her full name is to say! We get asked if she’s named after Lucinda Williams, the singer. The answer is no, but ever since we chose the name, Lucinda Williams has grown on me.

Our second daughter will be here at the end of October, and nothing is coming to us as easily as Lucinda’s name. My husband likes Aurora, but it doesn’t have the same kind of nickname options, and I think it’s probably too popular. We both thought about Elianna, but our good friends of have a new baby Ellie. Plus I don’t like the way it would be hard to spell.

Mostly I keep thinking we’ll hear the perfect name, but we’re running out of time!

It sounds like you’re both drawn to longer names, so I won’t try to suggest Claire or Sloane.

The ideal name for Lucinda Kate’s sister will:

Did I miss anything?

In general, then, we’re looking for a sweet spot. No to names like Katrina and Katerina, that can easily be respelled. But we’ll also (probably) avoid long and lovely names like Dulcinea and Fiorella. They check a lot of the boxes, but they’re so uncommon that I can imagine some headaches and challenges.

A SISTER FOR LUCINDA KATE

Long and lovely, and easily shortened to Nella or Nell, Antonella feels like one of those names you never hear – even though everyone recognizes it.

Should you find yourself calling your girls Lucy and Evie, revealing their elaborate, lovely full names will be the most delightful surprise.

There are plenty of gorgeous Lily names, but many of them are more common – or, like Elianna, could be spelled multiple ways. Liliosa, though, has been around since at least the ninth century. It’s distinctive and different, though Lily is quite popular.

Strictly speaking, Mariana could easily be spelled Marianna. It fails this test. And yet, Mariana is far more common. And it’s only one question – one N or two? – as opposed to multiple variations. Plus, Mariana is every bit as strong and lovely as Lucinda.

Fiery Seraphina doesn’t quite make the current US Top 1000. In fact, it never has. But it’s a logical sister name for Lucinda, equally dramatic and bold. I’d shorten Seraphina to Sera or Fee.

Like Mariana, there are two possible Susanna spellings – with or without the ending H. But Susanna regularly outranks Susannah, so I think it’s safe to recommend this version. As for nicknames, besides Susie and Sue, there’s also Suki/Sukie, Zuzu, and Sosie.

A classic and enduring name, Theodora is rich with short forms. And it feels weighty and meaningful, a little bit vintage, but still fun to say.

I love the sound of Lucinda and Veronica. They’re timeless – but not really classic – names. Both have energy to spare. I’d shorten Veronica to Vera, Vero, Vica, or Vee – but Ronnie/Nicki are choices, too.

So many of these names are great with Lucinda that it’s tough to narrow it down!

My top pick is probably Evangeline. Like Lucinda, it offers an easy, built-in nickname. But if Evangeline feels a little too familiar to you, then I think I’d opt for Susanna. Like Lucinda, it’s a name everyone knows, but no one is using.

Readers, what would you name a sister for Lucinda Kate?