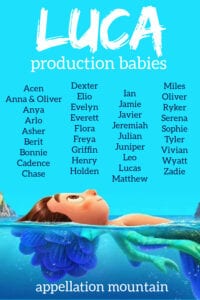 Looking for the Luca production babies? Here’s the list of 37 babies who got a shout-out in the closing credits of Disney-Pixar’s latest flick.

If you’re new to the concept, it’s pretty simple. It takes months – sometimes years – to create an animated movie of such complexity. That means that employees welcome plenty of children during the process.

Ever since the very first Toy Story movie, the team at Pixar has acknowledged these new arrivals at the very end of the closing credits. And name fans? We’ve been watching for them just as long. Since that first movie debuted in 1995, other animation studios – including Disney, which now owns Pixar – have gotten into the act, too.

Given the creative nature of many studio employees, the names tend to be intriguing. And sometimes it’s tempting to wonder if some of them are shout-outs to earlier Disney and Pixar projects, too.

Oh, and a huge shout-out to Angel for sending me the production babies screenshot before I got a chance to see the movie myself. Thank you!

Let’s dive in to all of the Luca production babies!

From twins named Anna and Oliver, to Henry, Lucas, Matthew – and another Oliver! – classic names are always part of production babies lists.

Another category well-represented: current favorites. Just like all of us, Pixar employees often stick with names that parents love for this generation.

On the girls’ side, there’s Evelyn, Vivian, and Juniper.

Tyler and Cadence sort of fit in this same category, though both are well past their peak of popularity.

Production baby names sometimes reflect broader trends. Here’s one: our love of casual names. Sophie is rising, even as Sophia and Sofia plateau. And while it’s hard to argue that the evergreen James is out of favor, it’s worth nothing that Jamie is back for boys, right at home with other nickname-only options like Charlie and Theo.

The broad scope of any Pixar production means that their personnel come from all across the world, representing diverse and varied backgrounds. Some of these production babies might be growing up outside of the US, but it’s also possible that their Pixar-employed parents simply chose favorites from their own cultures to pass down to their children.

Anya, the Russian take on Anna, never quite caught on in the US, but it’s among the more familiar picks. So is the Scandinavian Freya, now a Top 200 favorite – so maybe it belongs in an earlier category.

But then there’s Berit, a Scandi take on Bridget via Birgitta, quite rare among English speakers.

Javier, of course, is the Spanish form of Xavier, and long familiar in the US.

INSPIRED BY THE STUDIO … OR THE FILM?

With two dozen Pixar movies to date – Luca is the studio’s twenty-fourth feature length film – no surprise that some parents choose names used in prior films. But did they do it intentionally … or was it a coincidence?

Cozy, casual Bonnie is the kid at the heart of the later Toy Story films. It feels like an appropriate choice for a Pixar staffer.

And then there’s Arlo, a name boosted by 2015’s The Good Dinosaur – though the name is possibly more successful than the film itself.

Two other choices leapt out from the production babies list: Elio is the Italian form of the Greek Elios, meaning sun. Given the film’s setting in the Italian Riviera, it feels on point.

This last one might be a stretch, but Serena sounds almost exactly like siren – as in the legendary creatures similar to mermaids. Since the movie is about sea monsters, well … the comparison leaps off the page. Except, of course, Serena actually comes from a Latin word meaning tranquil.

First up: Acen, possibly an attempt to fashion a formal name for rising favorite Ace?

Vintage up-and-comers Dexter and Flora feel just slightly ahead of the curve – exactly right for a wildly creative workforce.

So does Zadie, a version of Sadie transformed by the zippy Z. English author Zadie Smith helped make the name famous.

Of course, the name that stands to benefit most from movie isn’t waiting near the end of the credits. It’s Luca itself, a rising favorite prior to the movie’s release, a cool classic parents have embraced in recent years. While it already ranks in the US Top 100, Luca is one to watch.

What are your favorite Luca production baby names? 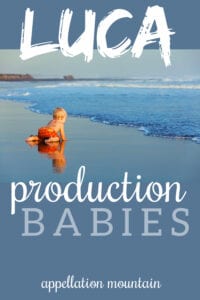 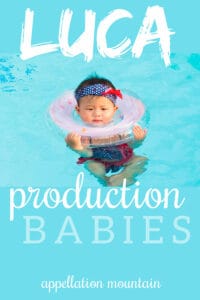