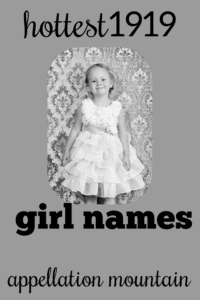 These are the names I might have blogged about way back when, as the first World War drew to a close and Mary Pickford was the brightest star in Hollywood.

The hottest 1919 girl names would all be right at home in 2019. Except they’re all relatively rare – or, at least, most of them are less common than they were a century ago.

The Addie names are white hot today, with multiple spellings of Adeline/Adelyn in the US Top 1000. Adelina, yet another version, can be found there, too. But it’s relatively underused today, though it did appear in the rankings at #543. On paper that’s better than the name’s 1919 performance, but in 1919, the name was skyrocketing in use. Today, it seems to be on gentle decline. But I think it could still appeal to families looking for an alternative to Isabella.

Afton comes from river name made famous by a Robert Burns poem, and often set to music. We love a tailored choice for our daughters, and place names have never been more popular. So it’s not surprising to hear Afton today. But way back in 1919, Afton ranked in the US Top 1000 at #829. It has rarely been back on the charts since. The poet Burns passed away in 1796, five years after writing the poem. Presumably, the folk song helped keep it in the minds of parents.

Lear’s loyal daughter, Cordelia has been in sparing use since Shakespeare wrote his version of the play in 1606. It’s a literary name that we all recognize, thanks to a sprinkling of other minor characters and real people. Joss Whedon used it in Buffy; Anne Shirley, of Green Gables fame, longed to have this name for her own. In 1919, it was still very much in use. By today’s standards, it’s rather rare. Of course, if some of the hottest 1919 girl names feel surprisingly modern, Cordelia seems appropriately vintage – one more reason to revive this lovely name.

A French name related to the ancient city of Delphi, Delphine also brings to mind the delphinium flower. And it’s the word to describe something that’s dolphin-like. (Think canine, feline, delphine.) So that makes it quite the nature name, with a French flourish, and an approachable spelling and sound. If Danielle was another decade’s smash hit, couldn’t Delphine be the next of the hottest 1919 girl names to make a comeback?

Georgia is a sweet spot name, the kind of choice every one loves, but not everybody is using. Georgette takes all of Georgia’s charm, then adds in a dollop of Scarlett and Juliette. It ought to be a winning proposition, but so far? Georgette remains on the sidelines. Back in 1919, it was rising. Today, it hasn’t seen the Top 1000 since the 1970s.

This Welsh name is back in the US Top 1000, after quite a few years’ absence. But it was even hotter in 1919, and would peak between the 1930s and 50s. Maybe that’s why it feels very early stage revival today. But it fits right in with so many spare, sleek girls’ names, from Sloane to Claire to Grace. One possibility: we’ve yet to meet long-time Spider-Man universe character Gwen Stacy in the newest version of the superhero movies. Should she appear, this name might surge in use once more.

We like to pretend that word names are new, born of the exuberant individualism of recent generations. Only that’s not so. Word names appear over the years, mostly – but not exclusively – borrowed from nature. Music and literature inspired a fair number of word names, too. Novella refers to a shorter novel. (Or maybe a very long story.) Thanks to that -ella ending it fits right in with girls’ names, in 1919 and today.

Back in 1919, Socorro was brand new to the US Top 1000. It would stay there into the 1950s. But today? It’s nearly unknown – even though it’s a Spanish name, and the Spanish-speaking population of the US is far higher in this century than the last. The name means relief. It’s the Spanish word for succor, taken from a title for the Virgin Mary: Nuestra Señora del Perpetuo Socorro. (Americans typically call her Our Lady of Perpetual Help.) That’s an appealing virtue meaning, and an edgy, energetic sound, too – a combination that could be great for a daughter born in this decade.

Some of the hottest names of 1919 were recent inventions – just like today. I’m not sure if that explains Treva. It’s sometimes listed as a feminine form of Trevor; or maybe it means homestead; it appears on maps in the ancient world, too. I’m tempted to rhyme it with Eva, but maybe it’s more like Trevor-with-an-a. Either way, Treva feels right at home in our century, as well as the one gone by.

We’ve been borrowing place names for ages. No surprise that a list of the hottest girl names of 1919 includes one. This might refer to the island in the West Indies, part of the Republic of Trinidad and Tobago. But it’s also the Spanish word for trinity, so it might have more in common with Socorro. Today, of course, Trinity has been well-established as a girl’s given name, so that’s another vote for considering Trinidad an option for girls born in 2019.

Those are my picks for the hottest girl names of 2019. Would you consider any of them for a daughter? 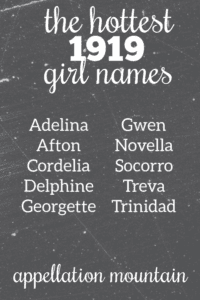 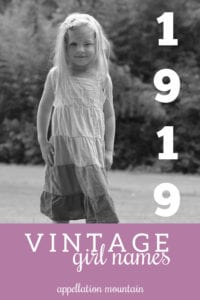