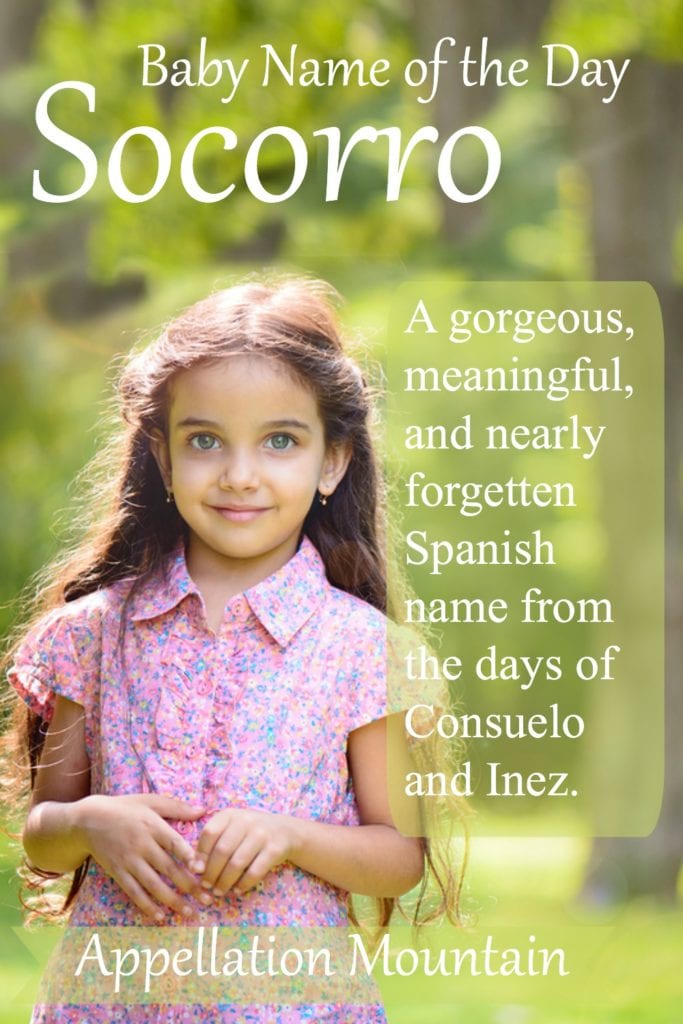 Looking for an intriguing virtue name for a girl? Socorro could make an unexpected choice.

Some recent namespotting inspired today’s Baby Name of the Day.

In Spanish, this name literally means relief or succor. Succor comes from the Latin succursus via French.

A fifteenth-century Byzantine icon by the name depicts Mary with the infant Jesus. Images of Mary abound, but this one is officially recognized by the Vatican. The faithful can visit the restored icon at Sant’Alfonso all’Equilino in Rome.

How does any of this connect to a given name? Simple.

In Spanish, the title becomes Nuestra Señora del Perpetuo Socorro. Just like many Marian names,  it is sometimes given as a girls’ name in Spanish, with or without Maria.

We tend to think of English-Spanish crossover names as a 21st century phenomenon. It isn’t so. Back in 1919, plenty of Spanish-influenced names for girls made the charts:

While Juanita and Anita seem stuck in fashion limbo, Socorro belongs with Inez and Consuelo – vintage names that feel fresh and appealing.

A wealth of nicknames could provide another reason to consider Socorro.

Romance novelist Maria del Socorro Tellado Lopez became one of the best-selling Spanish language authors. As the writer of more than 5,000 works, she even held a Guinness World Record. Several of her twentieth century favorites inspired popular telenovelas. Her pen name was Corin Tellado.

Besides Corin, I’ve seen Cory and Coco suggested as nicknames, both of which make Socorro very wearable for a child.

It also appears as a place name, used in more than a dozen locations throughout the Spanish-speaking world, including an island in Mexico.

A bird native to the Mexican island by the name is called the Socorro Wren. A mockingbird also shares the island’s name, as do a parakeet, a towhee, a dove, and an elf owl.

The name appears on all the Spanish language baby names sites I’ve checked, but I couldn’t find much chatter. Do native speakers consider this one an abuela name, not quite ready for revival? Or is it waiting in the wings with Antonia and Florence?

My sense is that the name fits with the latter. Given to just eight girls in 2015, Socorro is teetering on the edge of extinction. But that can make for an edgy, interesting, and still traditional choice for a daughter’s name, far less expected than Sofia.