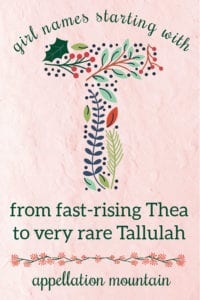 But it’s not a very popular one – at all! T ranks twenty out of twenty-six letters. Even Z names are more popular.

That wasn’t always true, though.

In the 1960s and 70s, names like Tracy and Tammy, Terri and Tina and Tanya were everywhere.

But now? There’s not a single girl’s name starting with T in the entire US Top 100.

And yet, dozens of appealing choices starting with T await.

MOST POPULAR T NAMES FOR GIRLS

An early surname favorite for girls, Taylor is now more likely to be the mom than the daughter. But the name remains in steady use.

A number name of sorts, Trinity refers to the number three – especially in a religious sense.

An Irish surname name, Teagan picks up where Megan left off.

It started out as a Theresa nickname, but now Tessa is the most popular of them all.

A sparky short form of Theodora, Thea feels like a spin on long-time favorites like Leah and Mia.

Talia claims Hebrew roots; Thalia, Greek. Though they tend to meet in the middle, an appealing name that’s nicely international.

An early celebrity baby name, thanks to Ryan O’Neal and Joanna Moore’s daughter, Tatum Beatrice O’Neal, born way back in 1963.

A Disney princess name, Tiana surged in popularity in the 1990s. It rose again following 2009 release of The Princess and the Frog. While it’s faded today, it remains in use.

A modern word name that fits right in with Ruby and Pearl.

A form of Theresa preferred in Spanish, as well as Italian, German, and several Scandinavian languages.

A minor sea goddess from Greek myth, and a long and lovely rarity for a daughter.

As in actor Thandie Newton, born Thandiwe, which means beloved in Xhosa.

A contracted form of Theodora, and the name of silent film star Theda Bara.

A former Top 100 favorite, from the era when -elma names were as ubiquitous as -lia names now.

A feminine Theo name that should get a boost from Hamilton.

The French form of Theresa.

An ancient region of Greece.

Ages before Juliet pined for Romeo, Thisbe loved Pyramus with results every bit as tragic.

A feminine form of Thor, perhaps more wearable in our Nora-Cora-Flora moment.

A New Testament name boosted by 1960s supernatural sitcom Bewitched, Tabitha has faded in use, but remains rich with potential.

An Arabic name meaning congratulations, fans of The Good Place will recognize Tahani.

Decades before Kai, Tai briefly caught on for girls. Credit goes to American figure skater Tai Babilonia, who competed in the 1976 and 1980 Winter Olympics with pairs partner Randy Gardner.

Another New Testament name, Talitha comes from a phrase spoken by Jesus in the Bible.

A name with more than one possible origin, and ties to outspoken Hollywood actor Tallulah Bankhead.

A feminine form of Thomas, via the elaborate Thomasina.

Originally short for Matilda, though Oscar-winning actor Tilda Swinton makes it feel like an independent name, too.

A Cornish name meaning third, Tressa feels like an twist on popular Tessa.

A calendar name rarer than June or Summer, twentieth century actor Tuesday Weld put this on the list of possible choices for our daughters.

What are your favorite girl names starting with T? 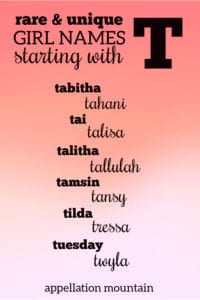 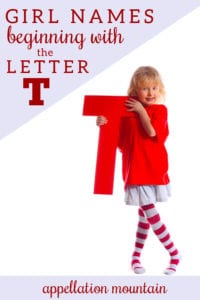