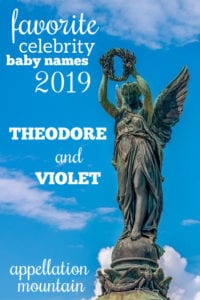 Time to announce the winners in the 2019 favorite celebrity baby names contest.

The victors in this year’s competition join Margot and Sebastian, the 2018 champs.

You’ll note that this contest isn’t about the headline-grabbing choices, the kids called Psalm and Slash Electric, Birdie and Zissou. You can read all about those names here.

Instead, these are the mainstream picks that appeared on high profile birth announcements. There are more than you might guess!

But now, let’s get to the results!

The final two names were Theodore and Charlie. Formal Theodore brushed past casual Charlie, with a commanding 71% of the vote.

I might have guessed Charlie would carry the day. It’s appeared on countless celebrity birth announcements, as well as plenty of real world ones, too. This year’s Charlie belonged to Lauren Conrad – but I can rattle off half-a-dozen. (Including Zooey Deschanel’s slightly older son, who even shares a middle – Wolf – with LC’s new arrival.)

This year’s Theodore belongs to NBC News’ Richard Engel and wife Mary Forrest. As with Charlie, I can list lots of other parents who have also chosen the name.

But there’s something especially of-the-moment about Theodore. The name entered the US Top 250 in 2011, and broke into the Top 100 in 2015. It’s a classic, to be sure, but it’s also a white hot favorite. Maybe it’s the nicknames – cuddly Teddy, the o-ending Theo – or maybe it’s just a nice change from William, James, and Alexander.

On the girls’ side, the contest played out very differently. By the narrowest of margins – just a handful of votes, really – Violet brushed past Nora.

Once again, it was easy to imagine either name carrying the day. There’s something quiet and sturdy about Nora, a solid name that feels playful on a child, capable on an adult. Violet feels slightly more flamboyant, thanks to the vivid color and the colorful Violets we know – like Downton Abbey’s Dowager Duchess, or The Incredibles’ Violet Parr.

The birth announcement that put Violet on this year’s list comes courtesy of musician Tim Lopez and wife Jenna. You know him from The Plain White Ts, of “Hey There Delilah” fame.

What do you think? Did your favorite celebrity baby names win the contest?

Image by Couleur from Pixabay