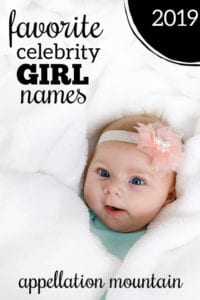 We’re talking about your favorite celebrity girl names 2019. No, not my favorites. I’ve got a list of the quirkiest and most intriguing choices for this year, the names that I can’t stop thinking about.

But plenty of high profile parents choose fairly mainstream names for their daughters. This is a chance to look at those possibilities, too. And it’s also a chance for you to pick your favorite celebrity girl names 1919 – the ones that you might consider for a daughter of your own.

I’ve chosen eight options that feel like the straddle the stylish and the familiar. They’re not quite buttoned-down classics, but neither are they too out-there. You wouldn’t be surprised to hear these on any playground.

There are two reasons I turned this into a contest. First, I found there were so many “The Stars, They’re Just Like Us” names that I couldn’t pick just one for my annual Best-Of list. But more importantly, I think these favorites can point to bigger trends. Last year’s winners, Margot and Sebastian continued to rise in 2019. So do the two runner-up names, Louis and Genevieve.

If celebrities love them, and Appellation Mountain readers love them, then probably, in another year or two, they’ll be the names we’re hearing everywhere – if that’s not already true.

So let’s dive into this year’s contenders!

Nora – Actors Jay Ellis – you know him from Insecure – and Nina Senicar named their daughter Nora Grace this summer. It’s a traditional, but lovey choice. Nora is #30 in the US right now.

Violet – This flower power name stands at #43 in the US. Musician Tim Lopez and wife Jenna welcomed a daughter by the name over the summer. Violet joins sister Eloise, another name on this list … and Lopez is most famous as a member of The Plain White T’s, known for their smash hit, “Hey There Delilah.”

Claire – A straightforward, but feminine classic, Claire Elizabeth is the daughter of The Princess Diaries alum Erik von Detten and wife Angela. The name currently ranks #49 in the US.

Ruby – Deep red Ruby has enjoyed quite the revival. It ranks #74 in the US, and two celebs chose it for daughters this year. Rocker Nikki Sixx and wife Courtney named their new arrival Ruby. The View’s Abby Hunstman named her daughter Ruby Kate, a twin for William Jeffrey.

Delilah – Kiera Knightley and husband James Righton welcomed a second daughter, Delilah, a sister for Edie. It’s a pretty, fanciful choice boosted by a pop song. The name currently ranks #94 in the US.

Poppy – Not so long ago, Poppy was the kind of name only celebrities were daring enough to use. But now the bright flower name is on the rise. Kayla Ewell of The Vampire Diaries and husband Tanner Novlan welcomed Poppy Marie this summer. Poppy sits at #592 in the US.

Ramona – It’s the rarest name on this list, at #835. But it appeared on two celebrity birth announcements this year. Musician Ryan Lewis and wife Jackie welcomed Ramona Rae. (They’re thinking of calling her Mona or Romy for short). And country singer Margo Price and Jeremy Ivey went with Ramona Lynn.

Two sweetly old-fashioned names square off in the first contest.

Not only are Ruby and Delilah pretty names, but both have been boosted by song. The Plain White Ts scored a hit with “Hey There Delilah” in 2005. And Ruby? It’s featured in at least a half dozen hits over the years.

Check back next Saturday to see if your favorite Celebrity Girl Names 2019 advance to the next round, and don’t forget to look for the boys’ contest, too!