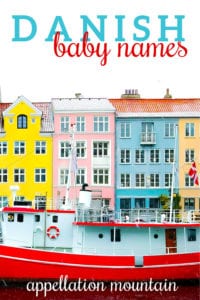 Danish baby names range from the very familiar to the utterly unexpected.

As of 2019, Denmark’s #1 names were Emma and William – both reliable chart-toppers in the US.

But let’s look at some of the Danish baby names that American parents probably haven’t heard, or at least aren’t using.

Some of these might make great choices for a child. They’re all taken from the recently released Top 50 names.

Do you need Danish heritage to pull these off? It might help for some. But most of these feel just slightly international and intriguing – not necessarily reserved for Danes.

Agnes is Agnes, a traditional name with a long history of use. But in the US – as well as much of the English-speaking world – we’ve put Agnes on the shelf. In Denmark, and elsewhere in Scandinavia, it’s the height of style. Maybe Americans should take a fresh look at this vintage charmer.

Alba can mean bright, from the Latin albus. In Italian and Spanish, it means dawn. And in Germanic, the name element means elf. So that’s a lot of possible backstories and meanings – and it only scratches the surface.

As with Alba, possible origins for Alma abound. It’s the Spanish word for soul, a Ukrainian river name, a Turkic word for apple. In Latin, it means nourishing, and there’s a Saint Almus dating to the thirteenth century. It’s nicely pan-European, at home from Stockholm to Barcelona, and nearly everywhere in between.

Maybe the first conventionally Scandi pick on this list of Danish baby names! Astrid brings to mind author Astrid Lindgren, as well as the Viking warrior from the How to Train Your Dragon franchise. Fans of The Office remember that it was misspelled and misunderstood by Michael Scott, but that shouldn’t attract from the name’s timeless appeal.

Also spelled Freya and sometimes Freyja, it’s a Old Norse name meaning lady. She’s the goddess of love and beauty, a little bit like Aphrodite in Greek myth. But Norse gods are fierce – she also escorts heroes who die in battle to the afterlife. The ‘y’ spelling in bigger in the English-speaking world, though it has only ranked in the US Top 1000 for the last handful of years.

A mini name in the key of Ava and Mia, Ida could be big in the US – but it fails to make the Top 1000. Notable namesakes abound – Tennyson used it for his poetry, Ida Tarbell pioneered investigative journalism in the early twentieth century, and a handful of saints, fictional characters, and real-world women of accomplishment complete the picture.

Eleonora tends to appear in baby name books as the Scandi equivalent of Eleanor. But it’s this slightly shorter form that ranks on the popularity charts today.

Liv Tyler made her brief, sharp name famous. We tend to hear it as an Olivia nickname, but that’s not so. It’s an Old Norse name meaning protection … but it happens to be the same as another word meaning life. That makes Liv something of a modern cousin to Zoe.

Matilda is quietly trending in the US, an antique name on the upswing. In Denmark, it’s Mathilde instead. The pronunciation is more similar than you might guess. Saints and royals have worn the name, and it has a long history of use in Scandinavia. That’s particularly true in Denmark, where it’s first found in the thirteenth century.

It sounds like a sister for Story or Fable – and that’s part of the appeal. But Saga is also a Norse goddess name. Accounts vary, but Saga presided over history and wisdom, and possibly poetry, too. It sounds thoroughly Scandi, and undeniably literary.

We think of Axel, the far more familiar spelling in the US. But Aksel is preferred in Denmark. It’s the medieval Danish form of Biblical figure name Absalom. The ‘x’ makes it cool, edgy, and familiar in the US. The ‘ks’ version takes it a little closer to its roots.

In the 800s, King Alfred the Great of Wessex fought tirelessly against invading Danes. But today, Alfred is heard equally in both countries. In England, cuddly nickname name Alfie is a chart-topping favorite. Danish parents have put the full name into their Top Ten in recent years. American parents remain lukewarm on both forms, but that could change.

Despite our love for Emily, Emma, Emilia, and Emmett, American parents tend to overlook Emil. But it’s a nicely pan-European name with a current sound and a long history of use.

File Frederik with Alfred – a traditional favorite overlooked in the US, but finding a well-deserved place in the sun elsewhere. It’s the name of Denmark’s current Crown Prince, though that seems to reflect the name’s long-standing classic status, not explain the name’s current popularity.

The Danish form of John, Johan has a long history in Scandinavia. (But then, factoring in related names, John has been wildly popular for ages – and remains so today.) Several Swedish kings and plenty of Scandi notables answered to the name. And while it’s easy to dismiss it as a classic in long use, I suspect it’s more like Henry or Theodore – a trending classic – than simply one that’s never fallen out of favor.

Konrad feels German, and indeed, that reflects the name’s roots. We tend to spell it with a C in English, but K is preferred throughout much of Europe, including Scandinavia. It’s much more popular in Denmark today than in neighboring countries.

The Italian Mario comes from an old Roman family name – Marius! Les Miserables fans will recognize the valiant Marius Pontmercy, who falls in love with Cosette. (Eddie Redmayne played the character in the 2012 movie.) But Marius isn’t exclusive to the novel, or to France.

Nohr makes for an intriguing and modern name. It’s brief and unexpected, but not out of place in our age of Jax and Kai. It turns out that Nohr comes from antiques like Norman and Norbert. Still, Nohr feels thoroughly modern, a wintry name with style to spare.

Another name with German roots and a pan-European vibe, Otto reads as quirky and classic in the US. Now that Oliver is so popular, perhaps Otto is the next O name for boys primed to catch on.

Storm feels like a weather name, one that some might argue sounds more like a vocabulary word than a child’s name. But the Old Norse Stormr had the exact same meaning. It lends Storm some history in Denmark, where it’s a surprisingly popular pick.

What are your favorite Danish baby names? What surprised you?