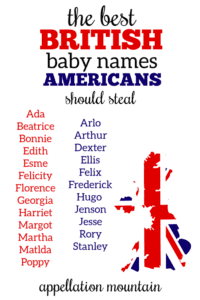 The new data is out on British baby names.

Elea at British Baby Names provides the best analysis. Start with the new Top 100 list here. But it’s got me thinking: if you’re naming an American baby in 2019? Some of the names from that other English-speaking country might be exactly what you’re after.

After all, a handful of these names are heard in the US, but aren’t quite so popular here as they are there … yet.

Arthur – #7 in E&W; #230 in the US. It feels nicely British, doesn’t It? There’s the legendary king, plus the Weasley patriarch. But it works in the US, too. And hey – we now have Jason Momoa as Aquaman, aka Arthur Curry.

Dexter – #95 in E&W; #476 in the US. Long overlooked, save for serial killers and mad geniuses. But if Jaxon and Jax are big, why not Dexter and Dex?

Frederick – #65 in E&W; #496 in US. English parents are wild for nickname names, and Freddie ranks #18. But American parents love a long, classic boy name. Christopher and Nicholas gave way to Alexander and Nathaniel, and now there’s Theodore and Benjamin. I say Frederick ought to be in the next wave.

Jenson – #70 in E&W; unranked in the US, but Jensen is #293. Take a generation of moms named Jennifer, add our affection for Jackson and J boy names in general, and it’s stunning that we’re not hearing more of Jenson. Or is it Jensen? American parents favor the -en ending.

Rory – #38 in E&W; #368 in the US. Exclusively masculine in England, maybe The Gilmore Girls puts some American parents off this choice for their sons. (Though it shouldn’t. And Rory ranks a rarer #579 for girls anyhow.)

Ada – #55 in E&W; #251 in the US. Ada ought to be right up there with so many mini names parents love throughout the English-speaking world. But this big bump is probably brought to us by Peaky Blinders, a crime drama based on real nineteenth century events.

Felicity – #100 in E&W; #354 in the US. A handful of pop culture uses have pushed this name into the American mainstream, but it remains just under the radar.

Florence – #15 in E&W; #971 in the US. A place name with a distinguished bearer or three, made cooler by Florence + the Machine.

Georgia – #71 in E&W; #223 in the US. American parents tend to like Georgia, but it’s the English who are using it in serious numbers.

Harriet – #45 in E&W; unranked in the US. If you love Abigail and Charlotte, but are crushed they’re so common, this is the name for you! Scarcely used in the US, Harriet is as cool as Juliet, with built-in nickname Hattie if you like – or not.

Poppy – #11 in E&W; #592 in the US. Americans love a good nature name, just like British parents. But this one hasn’t quite reached Lily/Daisy/Violet heights in the US.

What are your favorite British baby names? Do you expect to hear more of these in the US anytime soon?