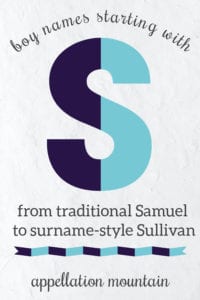 But every letter offers rich variety, and S is no exception.

Surname names abound. So do word names, from gentle Shepherd to bold Steel.

Traditional Steven and Stephen remain steadily popular, but international forms – like Stefan – less popular today. (The Spanish Esteban sits just inside the current US Top 500, but, of course, that’s not an S name.)

In terms of rank, S names for boys come in 11th place out of 26. You’re far more likely to meet a boy with a J or an A name, but boy names starting with S are plentiful, too.

A gentlemanly choice, Sebastian feels traditional. But it’s more popular today than ever before.

Nearly every Samuel is a Sammy or a Sam, an all-boy name as down-to-earth as Jack, as accessible as Joe.

The Spanish form of Saint James, Santiago is a favorite throughout the Spanish-speaking world – including the US.

From Silvanus, this New Testament name refers to the forest.

Classic Steven once reached as high as #10. And it ranked in the US Top 100 from the 1940s well into the early years of the 2000s. So maybe it’s natural that this name has slowed down in recent years.

Simon sounds intelligent and capable, a thoughtful name with a traditional vibe.

A preppy, polished surname name for a son. It’s also spelled Spenser, as in 1980s television favorite Spenser: For Hire. Netflix rebooted the show with Mark Wahlberg in the title role in 2020.

Another spelling for Steven, equally traditional – but serving to obscure the name’s true popularity.

The romance language form of Sergius and Serge is, by far, the most popular form of this name in English.

Sterling once referred to currency; today it is just as likely to mean “of high quality.”

An Old Testament name with an appealing meaning: peace.

Either an Old Testament name, or possibly borrowed from an Egyptian god.

Sage offers so many meanings: it’s a virtue name suggesting wisdom, a colorful one in a shade of green, and a nature name, too.

An Italian cousin to Saint.

An Anglicized form of the Irish Sean. The spelling Shaun is also seen, though it’s currently out of the US Top 1000.

In the nineteenth century, John B. Stetson created the must-have hat for the West. It makes this surname name sound rugged and at home on the range.

Another take on the Irish Sean, this one made popular by 1953 Western movie Shane.

A Danish name made famous by philosopher Soren Kierkegaard.

A casual nickname name, Sonny has long been given as a formal name, too.

A place name derived from the Spanish phrase meaning Saint Anne, Santana has been used for girls and boys in growing numbers – but at the moment, it’s far more popular for boys.

A favorite from the 1960s and 70s, Scott originally referred to someone from Scotland. Now it’s more dad name than anything, but chances are that bright, brisk Scott will make a comeback … eventually.

An Old Testament hero, as well as a Welsh saint from the 500s, Samson could be an alternative to traditional Samuel.

Rising fast for girls, but equally appealing for our sons, Sutton originally referred to any settlement in the south.

Once an extreme Hollywood baby name, Saint has gained in use – and quickly! Depending on your point-of-view, Saint can be a bold virtue name.

A name from both the Old and New Testaments, the Hebrew Saul offers a great meaning: prayed for.

A modern virtue name, a brother for Legend or Justice.

Found in the Old Testament and on the map, Shiloh’s sound and meaning appeal – tranquil.

Most Sams are really Samuel, but some are Samson or Samir … while others might be just Sam.

A Spanish form of a Latin name meaning savior, Salvador is dashing and creative. Think of the artist Salvador Dali or designer Salvador Ferragamo.

A fashionable surname from the 1910s, Stanley fell in use from the 1950s onward. And while it’s not quite back today, this name is attracting more attention from young parents.

A Biblical place name that inspired other towns, the most famous Salem is probably in Massachusetts. While the tragic events of the late 1600s seem like the distant past, the town has become synonymous with witchcraft.

Stephen by way of Europe.

This surname comes from the Spanish phrase todos los santos – all of the saints.

A name that signals good fortune as well as the seventh day in the Book of Genesis, Seven feels like much more than just a number.

Another spelling of Shepherd, long in use as a surname.

The Italian equivalent of Salvador.

Along with Saylor, Sailor is more common as a girl’s given name. But just like any occupational surname, it works for both – especially if your family has a connection with the sea.

As in celebrated author Salman Rushdie. The name comes from Arabic and means safe.

Likely a cousin to Saint, the most famous Sancho might be Don Quixote’s faithful companion, Sancho Panza.

Short for Alexander in Slavic languages, Sasha is more common for girls in the US, but still feels unisex.

As in baseball legend Satchel Paige, born Leroy. His claimed his nickname came from a part-time job carrying luggage at the train station, but that’s not the only story. Paige passed away in 1982. The name rose in use after Mia Farrow and Woody Allen welcomed son Satchel Ronan Farrow, now a journalist known by his middle name.

Legendary dancer and choreographer Savion Glover put his name on the map. It might be invented, though it sounds like it should be a name. It rose quietly in use in the years following Glover’s 1985 Broadway debut – he was eleven. Following Glover’s smash hit, Tony Award-nominated 1996 show Bring in ‘Da Noise, Bring in ‘Da Funk, Savion even spent over a decade in the US Top 1000.

Borrowed from the name of a Germanic tribe, sharp Saxon originally referred to a type of knife.

An adventurous, outdoorsy pick. To Kill a Mockingbird gave it to a girl, but Scout seems like an equal opportunity word name.

The Irish form of James.

Rock legend Bob Seger could put this last name right up there with Hendrix.

A Western African name equivalent to the title Sheikh.

From the ancient Sergius, this name is known in many European languages, but neglected in English.

From the Roman family name Severus – as in Snape – this name sounds like its meaning: severe or stern.

A Hebrew name meaning gift, Shai is better known in English as Jesse.

The name of a famed Zulu warrior king.

The Fast & Furious franchise made this surname feel like a potential first, especially after 2019’s Hobbs & Shaw installment put the name in the title.

An upbeat Irish surname, Shea means fortunate. Or, if you’re a baseball fan, it refers to the stadium that was the long-time of the New York Mets.

Another surname occasionally promoted to the first spot.

From a Sanskrit name meaning kind, Shiva is a destroyer god in Hinduism. That sounds dark, but Shiva’s goal is to remove evil from the world.

An English surname name, Sidney had become much more popular for girls. But ice hockey legend Sidney Crosby could be one of the reason that has changed in recent years.

As in the Lion King’s central character. Simba literally means lion in Swahili.

An Old Testament name that fits with Julian and Adrian.

The name of a fictional, adventuring sailor, immortalized in the Middle Eastern folk tales One Thousand and One Nights. He’s been reinvented ever since, but the name has never quite filtered into more general use.

A French surname by way of Scotland, based on place name Saint Clair.

Regardless of the spelling, this name is pronounced Sinjin.

Beyonce and Jay-Z gave this name to their baby boy. It’s climbed in use since the famous couple put it on our radar.

It sounds like six – and it might refer to the number. But it can also mean polished.

A nickname sometimes used for a junior, and occasionally given as a formal name.

An English surname name with a cool, edgy sound. A British glam rock band by the name dominated the UK charts in the 1970s.

A type of rock, Slate can refer to tiles made from the material, or perhaps its gray color.

A Slater was probably a roofer, or someone who worked with slate tiles. It sounds impossibly cool.

Mostly heard for girls, but a surname possibility that would work well for a son, too.

The most common surname has yet to catch on as a first for our children.

It would be a lot to live up to, but the Greek philosopher’s name is unforgettable.

A color name, referring to the chestnut shade of a horse’s coat, or a type of herb – and yes, a surname and sometimes given name, too.

Like Skip and Skeet, Spike feels a little more like a nickname than a formal first name. But actor and comedian Mike Myers chose the name for his son in 2011. (Meyers also has daughters named Sunday Molly and Paulina Kathleen with wife Kelly Tisdale.) He’s cited comedian Spike Milligan – born Terence – as one of the reasons for his son’s name choice.

Originally a name for a knight’s young apprentice, Squire meant gentleman by the nineteenth century. Today it’s less dramatic than Duke or Earl, but in the same general category.

A place name like Sanford, but with a different vibe, thanks to the exclusive California university.

Stanton would fit right in with so many two-syllable, ends-with-n names for boys.

A type of iron, Steel is something of a virtue name, projecting strength and constancy.

It looks like the masculine form of Stella – from the Latin word for star – though Stellan almost certainly has separate origins.

Another name that suggests enduring qualities, nature name Stone is familiar thanks to journalist Stone Phillips.

A literary name that never quite caught on, Story is every bit as wearable as word names like River or Lyric.

A Scottish surname and a royal house, also spelled Stewart. This name feels traditional, familiar, and unexpected, too.

Once a surname name for one who summoned others to official business, Sumner now sounds like a boy’s name in the key of Hunter and Spencer.

A Scandi import worn by kings and notables aplenty, but rare in the US.

A smooth surname name, probably originally derived from a word meaning servant. For years, swain has also been another word for suitor.

Borrowed from the surname of the late actor Patrick Swayze.

The name of a medieval saint from Winchester, England. If it rains on his feast day, July 15th, a rainy 40-day summer is said to follow.

A cousin to Silas, Sylvester also comes from the Latin silva – the forest. It brings to mind Sylvester Stallone and the animated Sylvester the cat. There’s a saint by the name, too. Because his feast day is December 31st, some European countries traditionally referred to New Year’s Eve as St. Sylvester’s Day, or even just Sylvester.

What are your favorite boy names starting with S?

Originally published on October 19, 2020, this post was revised substantially and re-published on April 18, 2022. 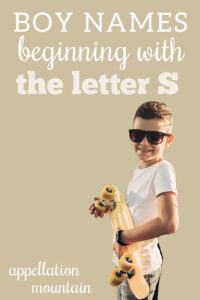 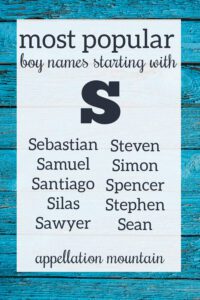