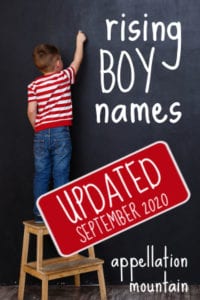 For the past several years, I’ve predicted rising boy names. They’re the names most likely to tip into the US Top 1000 when the new data is released.

Or I try to predict. Some years, I feel like I’ve got a crystal ball. Other years? Not so much.

After a round or two of prognosticating, I realized that some names I’m watching will take more than just 365 days to break into the charts. And so you’ll see lots of past names repeat.

I don’t automatically re-list names. In fact, I dropped a bunch of 2018 predictions from my 2019 list … only to have Aries, Decker, Kaiser, and Reign all rank.

Now a technical note: I’m making my predictions in 2020. But we’ll be evaluating them against 2019 data, which is expected on May 8, 2020 … covering all births recorded between January 1st and December 31st of 2019. (Confusing? Yup! But making predictions for 2019 five months after the year ends? That’s just plain wacky.)

UPDATE: The 2020 data release was delayed until September 4, 2020. This post has been updated to reflect how well I did with my future-casting!

You can read past years’ predictions and results here:

Now, on to my picks for rising boy names!

Abner appeared on my 2018 list. Actually, I was watching it way back in 2015. It’s still hovering, just outside of the Top 1000, just like it’s been for ages. So why does it make this list of rising boy names? First, we always need familiar, but underused, vintage names to revive. Plus, we like -r enders. And Abraham and Abel both rank in the current Top 200. Another Ab- name with an -r ending feels promising. And I do think potential nickname Abe fits in nicely with Max and Gus.

For a while, it felt like I was hearing Arrow everywhere. While that’s tapered off, I think Arrow remains a likely candidate for the Top 1000. That bright ‘o’ ending is a big reason. It also helps that Arrows seem like such positive symbols – they fly straight and true. The popularity of The CW’s Arrow helps, too.

A brand-new entry for 2020’s list, Banks picks up on the s-ending surname trend in a big way. It feels like a mix of nature name – think river bank – and bling. There’s a certain active verb quality to this one, too – the way a car or an airplane banks in a turn. (Am I using that correctly? It feels like a racing term, right?) I’d call it a preppy hellraiser name. It’s appeared on a handful of celebrity birth announcements for sons and daughters, but just like Miles, Brooks, and Hayes, I’d give this one to the boys.

UPDATE: Banks returned to the US Top 1000 for the first time since the nineteenth century. It now ranks #917.

I’m still bullish on Bear, even though the name continues to sit just below the threshold for ranking. But Fox and Wren appear in the Top 1000. Once Bear was a wacky celebrity baby name, only thinkable for Jamie Oliver. Then other high profile parents embraced it, including Kate Winslet and, most recently, Liam Payne. With every birth announcement, it’s felt more like a nature name, equal parts cuddly and fierce.

Another carry-over from last year’s list, Callahan continues to appeal for two reasons. First, it’s a great formal name for friendly Cal. But we’re also into longer boy names, like Sullivan and Caspian. With names like Hudson and Hunter, Carter and Colton so mainstream, Callahan fits.

Not so long ago, I might’ve ruled Evander way too fanciful to ever succeed. But then romantic Tristan became a late-90s breakout star. Caspian debuted in the Top 1000. And suddenly, ancient hero Evander sounds perfectly reasonable. It feels like an Evan-Alexander mash-up, but it’s actually closer to the latter. It’s Greek and means “good man.” If meaning matters, Evander passes the test with flying colors.

Often new names feel like riffs on current favorites. What else could explain a Top 100 packed with Aiden, Jayden, and Hayden just a few years ago? New favorite Everett, then, might inspire Everest. There’s lots to recommend it besides the similar sound. It’s a nature name, one associated with a famous peak. That association makes it an almost-virtue name. Not just a mountain, but a challenge. But its still feels slightly more subtle than Legend.

Harrison sits just outside of the current Top 100, so how can just-Harris languish beyond the Top 1000? With our growing affection for s-ending boy names, Harris shows plenty of promise. Plus, like Harrison and Hendrix, it’s part of the classic Henry family. That anchors the name even more. It fits perfectly with rising boy names, so here’s guessing that it just has to catch on … eventually.

Smith and Jones are surnames so common that  they feel nearly anonymous. And yet, I think both offer some serious cool. Jones benefits from the familiar first syllable Joe – a default nickname should your child prefer to blend in. As with Harris and Banks, it’s another s-ending surname, and that could mean plenty of potential, too.

Maverick, Legend, Blaze. Some parents like boy names that play big. Legacy fits right into the epic baby names trend. Plus, it debuted recently for girls. Similar names, like Reign, have quickly followed for boys, too. Why not Legacy? Like many word names, it sounds equal opportunity.

Earlier in the 2000s, every Mc and Mac name leaned girl, from Mackenzie to Mckenna to Mckinley. Creative spellings abounded. But lately there’s a cluster of Mc and Mac names that feel distinctly masculine. McCoy might be their ambassador. After all, the name belongs to an original Star Trek cast member. “The real McCoy” means the genuine article; it’s a swaggering name with plenty of spirit. The long-feuding Hatfields and McCoys lend it a certain Americana vibe. Fun fact: it’s a cousin to Aidan, and shares the same meaning:  fiery.

For every McCoy, there’s a Montgomery. One is at home on the range; the other, in a library. Montgomery belongs with gentlemanly boy names, Julian and Sebastian, Grayson and Oliver. Like Banks, it’s a name featured on a handful of high profile birth announcements. It’s also a name borrowed from Hollywood royalty – Montgomery Clift racked up four Oscar nominations from the late 1940s into the early 1960s. While it’s never been popular before, it feels like it belongs with the rising boy names of our era.

All of the reasons that Pharaoh shouldn’t work are the reasons it succeeds. The spelling is non-intuitive in English. And it’s a big, bold name – the title for a ruler of an ancient kingdom, rich with splendor and majesty that echoes across millennia. Those two qualities might be deal-breakers in another era. Today? Both feel like a plus. It goes farther than Kingston, picks up on Phoenix, and brings to mind names like Cairo.

Another s-ender, Riggs shares lots of the same qualities that put Banks on this list. But there’s something even more rugged and outdoorsy about Riggs. Maybe it’s because of the rigging on a ship or sailboat, or maybe it’s because a big rig is a serious freight truck. Or could it be down to the sound? Add a B, and Briggs does make the current Top 1000.

At first glance, it’s just a respelling of Zachary, both slimmed down and gussied up. But it’s also a little bit like Dakari with a Z. The latter is a Shona name meaning “rejoice.” Whether it’s a creative spin on the Biblical name or an import with an origin I’ve missed, I think it feels promising.

All of these names were within striking distance of that number. Because while it can happen, it’s very rare for a name to go from never-heard to ranked in the space of a year. Even overnight sensations take a little bit of time. 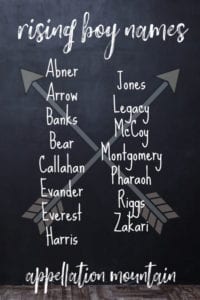