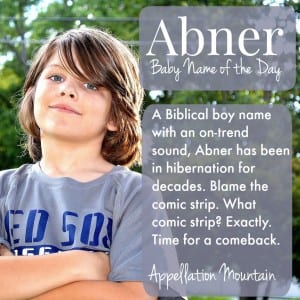 Looking for an Old Testament name with vintage style and a great meaning?

Thanks to Bethany for suggesting our Baby Name of the Day: Abner.

Abner appears in the Old Testament Book of Samuel. He’s a military commander and cousin to Saul.

The name has Hebrew origins, and a great meaning: my father is light. Ab refers to father and ner means light.

The Biblical figure gets mixed up in a feud between rival factions, and was ultimately killed by a rival and buried in Hebron.

There’s an eighth century Irish abbot by the name, but it isn’t clear if his name comes from the Bible, or some other lost source.

It was one of the many Biblical names little heard until the Protestant Reformation.

Abner: In the New World

There are plenty of men by the name in nineteenth century America, including West Point graduate and Union Army General Abner Doubleday.

Doubleday came from a distinguished New York family, and went on to invent the San Francisco cable car system. For decades, it was said that Doubleday invented the game of baseball as a young man in Cooperstown, New York –  despite no evidence that he ever played the game. (Baseball Reference has the scoop.)

Other eighteenth and nineteenth century Abners include politicians, athletes, writers, an inventor, a prominent minister and an evangelist jailed for blasphemy.

The name hovered between the high 200s and the low 500s from the late nineteenth century into the early twentieth. But by the 1930s, Abner had left the US Top 1000 and was headed towards obscurity. 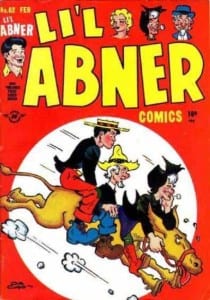 Could the comics be to blame for Abner’s demise?

Rural Dogpatch was one of the first Southern settings for a comic. Capp’s hillbilly characters shaped the way the world saw the American South.

The star of the show was 6’3′ tall teenager Li’l Abner Yokum. Yokum towered over his parents, and was strong, sweet, and none too sharp. When Abner married Daisy Mae in 1952, it was featured on the cover of Life magazine.

On an equally Southern, but more serious note, William Faulkner gave the name to a character in his 1939 short story Barn Burning.

Abner: The Road to Revival

The few pop culture uses weren’t flattering: a pet pig in Nickelodeon’s Hey Arnold!, one of the Kravitz neighbors in television’s Bewitched.

But it looks like Abner is ready for revival. Abner’s -r ending is quite stylish. Other Ab- names for boys are on the rise: Abel, Abraham, and Abram all gained in 2013.

If a possible rise in Abner’s popularity gives you pause, there’s an even rarer form of the name to consider: Avner. Avner is the preferred form in modern Hebrew. (It’s listed first in the Kveller database.) That ‘v’ sound amps up the name’s cool factor.

So if you’re heartbroken that Silas is catching on quick, you might want to consider under-the-radar Abner. The name is every bit as Biblical and on-trend, but definitely unexpected.

What do you think of Abner? Is this name ready for revival?