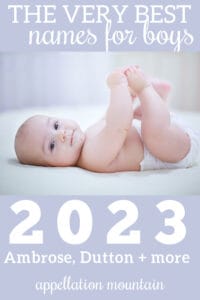 This is the Appellation Mountain list for the coming year.

Instead, it’s a general style direction. A sneak peak at sixteen names that could help define the way we name in the year ahead.

If the girls’ list was defined by sweetness with a spark, the boys’ list is chock full of offbeat leading men. They’re capable of taking center stage, but they’re not the go-to classics, like William, or the action heroes, like Jack. Neither are they modern favorites or chart-topping style stars – yet, though some of these could join Maverick and Elijah in the future.

This list is a little light on surname names, too. While they’re not going away any time soon, it does feel like more parents are looking for a slightly different kind of name.

And yes, you might recognize some of these from the 2022 list! It can take a while for a great name to catch on.

An ancient name with an enduring meaning: immortal. While we’re still seeing plenty of epic boy names like Maverick and Legend, it’s happening alongside the return of the gentlemen – buttoned-up boy names that wear well across a lifetime.

Traditional Theodore is on top, which means plenty of boys answering to cuddly nickname Teddy. And names like Raven and Wren have gone mainstream. So maybe Bear isn’t any kind of a surprise at all, a name that’s sweet and fierce at the same time, and one that brings to mind the late, legendary football coach Bear Bryant – though he was born Paul.

We love Jack, a classic name with an action hero vibe. But we’re also big on newcomer names like Kai, less traditional but with the same energy. Beck might be short for Beckett or Beckham, but it also stands on its own, brisk and bold but very much feeling like more familiar favorites.

2016’s Rogue One: A Star Wars story seemed like the only time we’d ever meet Cassian Andor. But then along came Disney+’s original series Andor, filling in all the gaps about how our unlikely hero went from cynic and thief to rebel and hero. The name follows current favorites like Sebastian, but also picks up on potential nickname Cash.

Never bet against an Irish name in the US. That said, for years, Conan was deadly wedded to “the Barbarian,” a pulp fiction character turned comic book hero turned blockbuster movie starring a young Arnold Schwarzenegger. But the movie came out way back in 1982. Since then, we think first of comedian and late night host Conan O’Brien – a very different vibe. There’s also a long-running manga and anime series called Detective Conan. That opens the door for parents to consider Conan, an Irish name that feels versatile and new.

Another trend for the 2020s? Purpose names. They’re virtue names remade for the twenty-first century, rich with meaning. Many lean Christian, but only in the broadest sense – like Creed. It comes from the Latin credo – I believe. But it’s made famous thanks to this generation’s answer to Rocky Balboa, the fictional boxer Adonis Creed. He’s headlined movies in 2015 and 2018, with another sequel expected in March 2023.

Daniel meets Sutton in this surname name. It’s worn by the family at the heart of Yellowstone, the tale of a Montana ranching family. Debuted in 2018, the series recently entered its fifth season, delivering plenty of drama and intrigue. The name now feels rugged, with a little bit of swagger.

For years, Leif has teetered on the edge of the US Top 1000. Vikings: Valhalla could finally put this Scandi import on the rise? A second season of the hit series debuts early in 2023. After all, Leif falls somewhere between names like Jack and ones like River.

We are forever looking for the next comeback name. Classic Louis checks all the boxes. It shares the S ending of trending picks like Brooks and Atticus, but it’s as regal and saintly as Charles or Henry. A new re-telling of Anne Rice’s Interview with the Vampire on AMC helps; so does the youngest child of British royals Will and Kate. Louis is sophisticated and cozy at the same time, a strong name that wears well across a lifetime.

A brother for Ambrose, Montgomery is another choice with plenty of polish. Like Audrey and Ava, it has some Hollywood glam to offer up, too, thanks to 1950s leading man Montgomery Clift. It fits with surname names like Hudson and Carter, but takes the style in a new direction, too.

It’s possibly Ozzy has been hiding in the data for a while, a nickname for Oscar. But lately it’s just Ozzy that feels like one of the best boy names 2023. It blends the cuddly appeal of Charlie with the rock star energy of Hendrix, and that double Z in the middle doesn’t hurt, either.

Not so long ago, River was a bananas kind of name, reserved for offbeat families like the Phoenixes. But as the years have passed, River has gone mainstream, a name that suits any kid – outdoorsy or otherwise. It’s almost a virtue name, akin to Journey, Genesis, or Skye. While it’s already trending, it feels like a perfect name for coming year and a lock to enter the US Top 100 as one of the best boy names 2023.

Names like Brooks and Wells are already succeeding, a mix of associations buoyed by that stylish S ending. Rhodes seems like the logical next S ender to catch on. It’s a preppy hellraiser, a scholarly choice with a hint of rock and roll, a name with ancient roots and a modern sensibility.

Shai sounds – and maybe looks – invented. But nothing could be further from the truth. It comes from a Hebrew word meaning gift. Perpetual favorite Jesse is actually Yishai in Hebrew, and Shai is also sometimes heard as a nickname for Isaiah. It’s a unisex favorite in Israel, and feels poised to follow names like Kai into wider use in the US.

Not so long ago, any name really popular for girls didn’t stand a chance for boys. That seems to have changed. Accordingly, could we see an uptick in boys called Willow? Like William, it shortens to Will. Like Leo and Arlo and Milo, it ends with that upbeat O sound. And Warwick Davis is back as sorcerer Willow Ufgood on Disney Plus’s Willow, which could be just the boost the name needs.

Like Creed, Zion is a purpose name, often a poetic term for heaven. It’s a place name, too, used as a synonym for Jerusalem. Take all of that meaning, and combine a sound similar to favorites like Ryan, and Zion is a lock. Leaping into the US Top 100 might not happen in the coming year, but no question Zion has gone from out-there possibility to one of the best boy names 2023.

Would you consider any of the names on this list? What would you add?