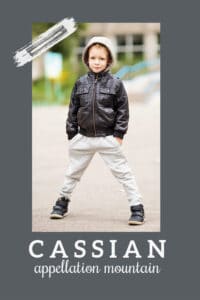 The baby name Cassian combines ancient roots with twenty-first century story to become one of the most intriguing names of the moment.

Thanks to Bay for suggesting our Baby Name of the Day.

Cassian comes from the name Cassius, via the old Roman family name Cassianus.

The meaning of Cassian is up for debate, but one possibility? Vain.

Happily, that’s easy to overlook in this name’s story.

At the turn of the fourth century, Saint John Cassian brought monastic traditions from the eastern church to the west, ultimately settling in what is today Marseille. (Which would’ve been in Gaul way back then.)

It’s the name of several saints in the same era, including a fourth century martyr. Cassian of Imola was a school teacher. After he refused to sacrifice to the Roman gods, his students turned on him, stabbing him with their styli. He’s now the patron saint of stenographers.

Nearly any saint – no matter how obscure – will keep a name in sparing use, and the baby name Cassian is no exception.

Cassian is sometimes heard as a surname. There’s a Canada-born yacht designer and a Major League Baseball player, along with a few other figures.

It seems to have the exact same name origin, from the old Roman Cassianus.

Of course, lots of names sound a little bit like the baby name Cassian.

The name Cassia sometimes serves as a feminine form of Cassius. And sometimes it comes from another name for cinnamon.

Irish surname Cassidy had a good run. And the Greek Cassandra is a classic.

Freshly popular baby boy name Caspian comes from the name of the sea.

Casper has never quite caught on in English, possibly because we all think of the comic strip character “Casper the Friendly Ghost.” But it’s a traditional favorite throughout much of Europe.

Chances are you’ve seen his movies, even if you don’t know it. From Oxford Blues to The Butler, Thank You for Smoking to Dallas Buyers Club, he’s worked on a wide range of movies, many of them Oscar-nominated

He’s the older brother of actor Cary Elwes, known for The Princess Bride.

But how do you pronounce Cassian?

Up until recently, Kash-en might’ve been the logical answer. It lines up with rock star surname Cash, as well as new innovations like Cashton. And it’s the sound we hear in Top 100 favorite Sebastian, too.

Except for the fictional character who changes everything. His name is pronounced Cass-ee-ahn. That’s more like Julian or Adrian.

We first met the most famous Cassian in 2016’s Rogue One. (Spoilers ahead.)

The movie is part of the Star Wars universe.

Played by Diego Luna, Cassian Andor is a rebel spy in the days before Luke Skywalker and his team took out the Death Star.

Remember in A New Hope, how Luke and the rest of the rebels reviewed the blue prints for that planet-detroying galactic super-weapon?

Somebody had to steal them.

And that somebody? Cassian Andor and Jyn Erso.

They sacrifice their lives in pursuit of the Death Star plans.

But Star Wars: Andor is a prequel, taking us back to Cassian’s early days. He’s a thief from the planet Kenari, destroyed by the Empire. He’s recruited to the Rebel Alliance and the rest, well … chances are you know the story.  Or will be watching it on Disney+, where the first season debuted September 2022.

COURT of THORNS and ROSES

Another fictional Cassian could be headed to the small screen

Sarah J. Maas wrote A Court of Thorns and Roses in 2015. It’s a New York Times bestseller, and the start of a fantasy series that currently numbers five books.

Talk of a possible television series is ongoing, which could further raise Cassian’s profile.

Until 2021, the baby name Cassian had never ranked in the Top 1000 most popular names in the US.

In fact, until the year 1997, the name didn’t register at all in the US Social Security Administration records.

Five births are required before the SSA lists a name.

Why? Cass- names, including Cassidy and Cassandra, were popular in the 1990s. But it may simply be that the baby name Cassian was always used in very small numbers, and 1997 simply marks the first year five births were recorded.

Because Cassian remained rare, reaching a high of 22 births in 2012.

Then came Rogue One.

It was released in mid-December 2016.

One factor: Andor was much-delayed over the course of 2020 and 2021. It was announced in 2017. Pre-production was taking place in early 2020, when everything ground to a halt.

Fans have been waiting for Andor – and hearing the name Cassian – for years.

An ancient name is reborn in a galaxy far, far away.

With baby boy names like Carson and Sebastian topping the popularity charts, to say nothing of other Cas- names, Cassian fits right in.

And yet, it’s the name of a revolutionary, of a hero who fights for the good, even at great personal sacrifice.

That makes this an on-trend name with a serious virtue vibe.

No surprise, then, that the baby name Cassian, is on the rise.

What do you think of the baby name Cassian? 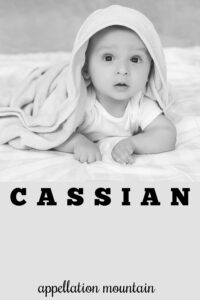 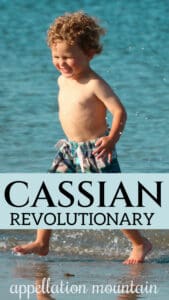