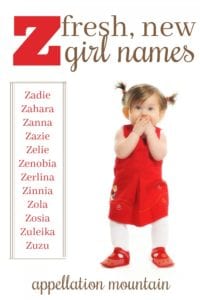 Z girl names have a certain something, don’t they? Just ask Zoe and Zoey, Zelda, Zara, and Zuri.

Zahra, Zainab, Zaniyah, Zaria, Zariyah, Zariah, Zhavia, Zaylee, Zoie, Zola, and Zora round out the rest of the sixteen Z girl names on the list.

With all of these Z girl names in the current Top 1000, are there more possibilities yet to be discovered?

Of course there are! Some are fresh and modern, recent innovations seldom heard before. Others trend vintage, even ancient, but sound surprising today, too. None of these names appeared in the US Top 1000 when the list was first published in September 2018, but that’s starting to change.

Still, every one of these names remains are – but I think they’re on the right side of wearable.

Here are my picks for twelve fresh, new Z girl almost names that no one is using … yet!

Sadie is a form of Sarah, so you might guess that Zadie comes from Zara. Not so. Instead, Zadie is simply Sadie-with-a-Z. London-born author Sadie Smith swapped her first initial, and published the bestseller White Teeth in 2000. A nineteenth century favorite, Sadie has returned to the US Top 1000 in recent years. No surprise, then, that a handful of parents have discovered this twist with some literary flair.

I’ve yet to write about Zadie, but check back and I’ll update when I do.

The Jolie-Pitts gave this name to their eldest daughter, Zahara Marley. The name claims a mix of roots – Swahili meaning “to flower” or Hebrew and Arabic meaning “to shine.” Either way, that’s quite auspicious. The name has seen a bump in use ever since the celebrity parents made the choice, but remains just slightly outside the mainstream.

I’ve yet to write about Zahara, but check back and I’ll update when I do.

British fashion editor and entrepreneur Zanna Roberts Rassi has appeared on reality shows like Project Runway All-Stars, drawing attention to her unusual name. I’m not sure if it’s Rassi’s birth name, but it probably started out as either a short form of Susannah/Suzanne or possibly a feminine form of John. Or maybe even a creative invention based on Anna and our love of the letter Z. It’s also spelled Jana.

I’ve yet to write about Zanna, but check back and I’ll update when I do. 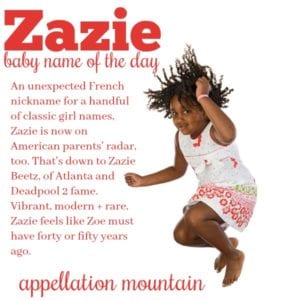 This name is so rare, you might wonder why it makes the list. Easy: rising star Zazie Beetz, of Atlanta and Deadpool 2 fame. Born in Berlin to a German father and American mother, her birth name is Zazie. It started out as an Isabelle nickname, but years before Beetz’ parents chose it, a best-selling French novel turned 1960 Louis Malle novel gave the name to a precocious tweenaged girl exploring Paris on her own. As Beetz’ star continues to rise, it’s easy to imagine parents embracing her name. 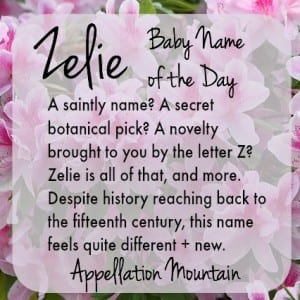 Zaylee entered the US Top 1000 last year. Was it yet another new twist on Kaylee? Maybe, or perhaps it’s inspired by Zelie. Like Zazie, it’s a old-school nickname for more traditional choices. But in this case, the Zelie in the news was a saint. Marie-Azélie Guérin Martin and her husband Louis Martin were the parents of the wildly popular Saint Thérèse of Lisieux. Both of the Martins were canonized – officially declared saints – in 2015. Pronunciations are all over the map for this one – in French, it doesn’t sound quite like either Ellie-with-a-Z or Zaylee, so importing it to American English offers multiple possibilities, though I think it’s the long ‘a’ that is catching on.

You might have spotted Zenobia way back in an English lit class. Nathaniel Hawthorne’s The Blithedale Romance gave us the beautiful, privileged Zenobia. But centuries earlier, the name belonged to a first century queen of Armenia, and a third century queen of the Palmyrene Empire. The latter served as regent for her son, conquering neighboring lands – including Egypt – before eventually picking a fight with Rome that she ultimately lost. From Chaucer to Rossini to the modern day, artists, playwrights, and musicians have attempted to re-tell her story. If you love the sound of Olivia and Isabella, but want something far less common, Zenobia might be the name for you.

I’ve yet to write about Zenobia, but check back and I’ll update when I do.

Once again, Zerlina sounds like an invention. But Mozart gave the name to a character in Don Giovanni in 1787. He may have based it on a Yiddish form of Sarah, Zerla or Zerle. Or maybe he found inspiration some place else entirely. Regardless, she’s gorgeous and street-smart and definitely a flirt. If there were more opera fans out there, I suspect we’d hear more of this name.

I’ve yet to write about Zerlina, but check back and I’ll update when I do.

Nearly any flower name is heard in small numbers over the years, and we can find women named Zinnia all the way back in the early 1900s. But it’s on the upswing now, part of the new generation of nature names for girls. Bold botanicals like Magnolia and Azalea are climbing, and we’re wild for Violet and Lily. Factor in the appeal of the letter Z, and colorful Zinnia makes an obvious choice.

Zola recently tipped into the US Top 1000. Maybe that’s because we like sassy, retro nickname-name Lola so much, and Zola turns it up with the letter Z. But other associations include  nineteenth century French writer Emile Zola, as well as record-setting runner Zola Budd. In the author’s case, it might come from an Italian place name. (His dad was born in Venice.) As for the runner? She’s South African, and Zola means tranquil in Zulu. So that makes this short name global, unexpected, literary, and undeniably vibrant. 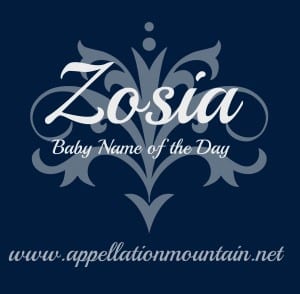 In Polish, Sophia is Zofia. And instead of Sophie, it shortens to Zosia. The pronunciation is tough to capture in English, but the most famous bearer rhymes her name with Sasha. Zosia Mamet played Shoshannah on HBO hit Girls, and remains in the spotlight following the series’ end. While it belongs strictly in nickname category in Poland, it might make an appealing heritage choice for American parents.

Zuleika appears in medieval legend, the name given to a figure from the Bible. The Book of Genesis and the Qu’ran, however, only call her as someone’s wife. In Persian, Zuleika means beautiful, and many stories using the name cast their Zuleikas as a temptress. But that’s old news today, and Zuleika might strike exactly the right balance between out-there rarities and overlooked gems.

If you know your classic Christmas movies, then Zuzu could bring to mind George Bailey’s youngest in It’s a Wonderful Life. It’s most often a nickname for Susan, but plenty of other names can lead to Zuzu, too. Brazilian designer turned activist Zuzu Angel started out as a Zuleika. It’s a shimmering name, but a cute one, too – a tough combination to pull off. And yet, just like Gigi and Lulu, Zuzu might wear better as a nickname.

Those are my picks for fascinating Z girl names, overlooked but very much ready for rediscovery.

Would you consider any of these for a daughter? What would you add to this list?