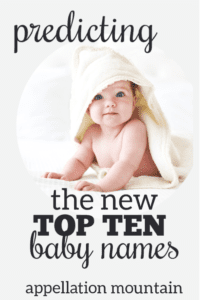 It’s like Christmas meets the Super Bowl meets my birthday.

New popularity lists means plenty more prognosticating than a groundhog on the morning of February 2nd. Catch up on all of my Predictions posts here:

Before we go any further, it’s worth noting that the Top Ten tend to be a pretty stable bunch – and the Top Five, even more so! Only a handful of names have ever climbed that high.

This means you won’t find Khaleesi in my predictions – at least not for the Top Ten! Instead, you’ll recognize every one of these names … and probably know at least a few kiddos called them already.

The current Top Ten for girl names looks like this:

Amelia and Evelyn entered the Top Ten last year, replacing Emily and Harper. (As they say on Netflix, nailed it!)

The new list is tough. In order for a new name to enter, a current name needs to vacate its spot. That means a name has to fall in use and another name has to gain enough to surpass one of the current Top Tens. In recent years, we’ve seen a different pattern: currently popular names are falling in terms of absolute births, but few names are rising in use dramatically enough to replace them.

That leads to curious outcomes. Emma fell in use from 2013 to 2014, in terms of percentage of total births – but still became the #1 name in the US.

There’s only one current Top Ten name that strikes me as truly vulnerable: Abigail. Here’s my prediction for the new Top Ten:

Emma – It’s falling in use, but nothing seems to be gaining dramatically enough to knock it out of place – yet.

Olivia – The story with Olivia sounds the same. I think it holds on to the #2 spot simply because we’re not quite ready to replace it.

Ava – Like the current #1 and #2 names, I expect #3 Ava to hold onto that spot when we see the new popularity list.

Amelia – A leap from #8 to #4 would be massive. And yet, Amelia seems to have plenty of momentum. It shares Olivia’s chart-topping style. One factor that argues against Amelia’s rise? The strong gains in popularity of similar-but-not-the-same Emilia.

Charlotte – I’m betting that Charlotte might gain slightly in the rankings. Why? Nonstop coverage of the British royal family keeps this name in front of parents – even American parents – in a (mostly) favorable light.

Isabella – I might have Isabella knocked too far down the rankings. Parents love this long and storied name. And yet, it’s been on top for ages, and I’m hearing plenty of parents avoid it because it’s just too, too familiar.

Mia – Another great English-Spanish crossover name like Isabella, and a mini name in the key of Ava, it’s easy to see the appeal of Mia. But after so many years, I think Mia is finally starting to lose favor with current parents.

Victoria – If Abigail is exiting stage left, what name will replace it? Camila spoke to me. Except I think Victoria has the greater chance. It’s tough to miss it when traditional names trend. But consider this: it’s another English-Spanish crossover, a feminine name rich with strength, and we’ve all been watching Jenna Coleman as a young queen on Victoria, shown on Masterpiece Theater in the US. Downton Abbey boosted plenty of names. This series could easily do the same. Plus, it’s one of those great long names, like Isabella, that comes with plenty of great nicknames, but begs to be used in full, too.

A random thought: remember a few years ago, when Princess Charlotte was born just days before the new US data was released … and Charlotte had entered the US Top Ten? We could have a repeat of that coincidence, with Meghan and Harry’s child due any day now, and Victoria a favorite among bookies if Baby Sussex is a girl.

Moving on to the gentlemen, here’s the current list of most popular boy names in the US:

Oliver and Logan replaced Ethan and Michael last year. I called Oliver, but Logan took me by surprise!

Wild card Logan soared into last year’s Top Ten on the strength of two blockbuster movies, both with the name in the title. While Logan had been popular for ages, suddenly it was everywhere and then some.

I doubt that kind of momentum can be sustained. Mason is also slowing down, and Jacob continues to fall. (Don’t mishear that as “no one is naming their kids Mason or Jacob these days … I expect both names to remain steadily popular for years to come.)

Still, I think both could tumble out of the Top Ten – but Mason seems slightly more vulnerable. As for newcomers, Henry and Wyatt both have some good momentum. But Lucas strikes me as the strongest candidate.

Liam – Liam overtook Noah for the top spot in the US last year. I think it will likely hold on in this year’s data.

James – This classic name feels quite current today – though a baby James is more likely to use the name in full, rather than Jimmy or Jamie. Despite worries that parents are borrowing it for girls – and they are, especially as a middle – I think it could be the new go-to classic for boys.

Noah – I’m hearing Noah less these days, but never bet on a former #1 to fall too fast.

William – I’m guessing James will eclipse William as the most popular classic boy name … but not by much.

Benjamin – A longer boy name with classic appeal, Benjamin is the new Alexander.

Oliver – Or maybe Oliver is the new Alexander? It’s one of the few names in the boys’ Top Ten that strikes me as really climbing.

Elijah – I think Elijah has just enough momentum to move up the rankings a bit.

Logan – Last year’s Logan spike strikes me as a fluke. My take? It’s a modern staple, but not a future #1 name.

Jacob – This former #1 name remains in heavy use, but Benjamin + Oliver have more appeal today.

Lucas – My bet for the newest member of the US Top Ten, a Biblical classic that feels just a little bit different today.

I ruled out Henry and Wyatt because while they’re both climbing, they’d have to really surge in use – eight spots for Henry, and fifteen for Wyatt. Of course, Henry is wildly popular in several states, ranking in multiple Top Tens already. So maybe in the near future … but not this time.

Are there others names you think will reach the US Top Ten? 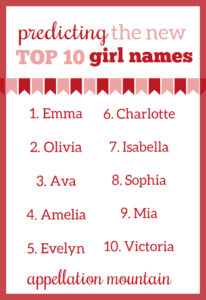 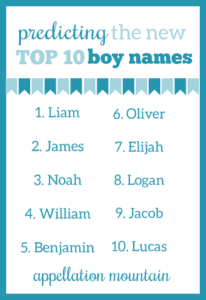