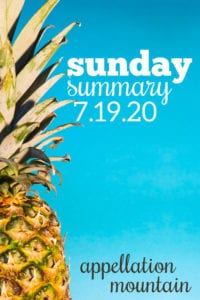 For ages, I might’ve told you that cute girl names were a liability.

Who wanted to nominate Tammie or Lori for a judgeship?

Lately I’ve been thinking that I have it ALL wrong. And who brought it home for me?

Why, Judi Dench. Of course.

Credit to the BBC’s Staged shorts for setting me straight:

When asked why her name appears first in her movies, she replies:

That’s Judi as in Jetson. Or Garland, better known as farm girl Dorothy, she of the ruby slippers.

Judi Dench was born in 1934, just before peak-Judy in the US and the UK. Judi is the mid-century equivalent of 2020’s Ellie.

The problem isn’t necessarily cutesy names. The problem is that, for too long, we’ve equated feminine with less capable. And so we choose Madison over Madeline, Sloane instead of Jane.

Sometimes it’s simply a question of style – and, to be clear, I don’t think that boy-names-on-girls is a sign of the apocalypse. But often parents say that they worry a more feminine name will signal lower expectations.

It strikes me that changing the names we choose is fine … but we really ought to be focused on changing our attitudes.

If you’re still not willing to risk it, consider this: the Oscar and BAFTA-winning master of her craft was born Judith Olivia. A casual, upbeat nickname with a traditional first and middle might be a great compromise for your daughter, too.

Another mega-family is coming to reality television. Meet the Derricos! They have fourteen kiddos, including two sets of twins, triplets, and quintuplets. And before you ask, they were all conceived naturally. And every kiddo has a D name. Their show debuts on TLC on August 11th. (Warning: the series begins with the premature arrival of their triplets – looks like it could be very emotional.)

Nancy reviews what’s big in Alberta.No surprises in their Top Tens, but the rarities lists? As always, they are packed with fascinating finds. Calluna + Eilish, Maxjay + Cousteau … and so many more.

A question I’m debating: is the name Harvey ruined? I think there are plenty of positive associations, so I hope not. And yet … the Weinstein case casts a long shadow. And, of course, if you live in Texas, the 2017 hurricane might be top of mind. Then again, in another ten years, I’m guessing other headlines may have shifted our opinions again …

Have you voted in the Summer Baby Names Showdown? The girls’ semifinal contest is here, and you can find the boys’ semifinal match-ups here.

Can’t get enough of these posts? Subscribe to get the Tuesday newsletter: 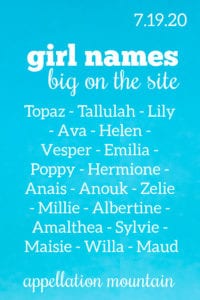 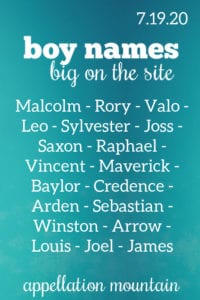