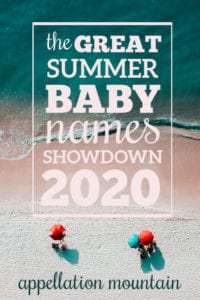 Every March, Appellation Mountain readers participate in a bracket-style showdown to choose their favorite name of the year. Names win their way into the contest by being the most-viewed for the prior calendar year.

Plenty of names are perennial bridesmaids, making it to the contest year after year, but never winning big. But over the last decade, a bunch of truly great names have claimed the top spot.

During this so-very-strange summer, we’re matching up all of our past champions to choose a victor of all victors.

To check out all of the names competing in this years’ Summer Baby Name Showdown, read this post.

Let’s review last week’s contests before we move on to the new match-ups!

Genevieve bested Isla, 59% to 41%. One of the fun things about contests like this at Appellation Mountain? While more popular names tend to fare better, it’s not a straightforward reflection of overall name popularity. While Isla ranks in the US Top 100 and Genevieve comes in nearly 100 places higher, reader votes tell a different story.

Sylvie won over Cora, 55% to 45%. An even more dramatic example, Top 100 Cora lost to just-in-the-Top-900 Sylvie. But Sylvie is a long-time favorite with name fans, a great choice that’s slipped just under-the-radar until recently.

Margot defeated Wren, 63% to 37%. Margot has quickly become one of the names to watch, a mix of traditional and modern that appeals to parents looking for something less classic than Margaret, but not quite as daring as Marlowe.

Eliza slipped past Louisa, 56% to 44%. These names likely appeal to the same parents. They could be sisters! But Eliza and Margot fit in the same narrow category – traditional, but with a slight twist that makes them feel like modern favorites. I continue to think that Hamilton will boost Eliza, too, especially now that it’s streaming on Disney Plus.

That means that Genevieve, Sylvie, Margot, and Eliza advance. And neither of these semifinal contests is easy!

I can’t look! There’s no easy way to pick a favorite in either category, right?

Nonetheless, voting will remain open through Tuesday, July 21st. Pick your favorite – the name you’d give a daughter, or just the name you’re more excited to hear!

Then check back on Thursday, July 23rd to learn which names prevailed – and, of course, to vote for the winner in the exciting girls’ Summer Names Showdown 2020!